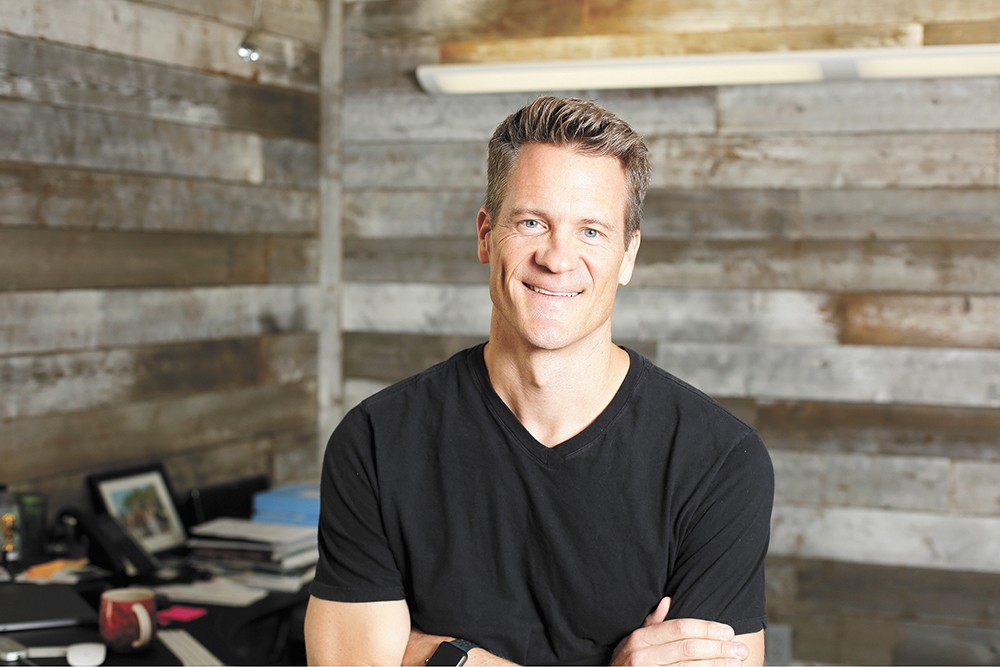 and appear more noble to do good philanthropy from behind the scenes, anonymously. But if you stand in the shadows, people won't realize your impact. Stand in the limelight, maybe your actions will have a domino effect.

At least that's what Tyler Lafferty believes, and that's why the winner of the Inlander's Peirone Prize agreed to a lengthy interview in his office on a hot August afternoon in downtown Spokane. The concept of making positive, personal connections with people is one of the driving forces behind Lafferty's success as an entrepreneur — not to mention as a volunteer, board member and financial backer of a number of local nonprofits.

Lafferty, 44, and his longtime business partner Nick Murto are probably best known as the co-owners of Seven2, a local media and marketing firm in downtown Spokane (with the big luchador mask on the front of their building on Main). Since launching the company in 2004, the two have continuously expanded their offices and branched out with Method Juice and the Union fitness studios.

But about 10 years ago, Lafferty says he began to question the role he was playing in life. He started to wonder what his "purpose" was.

Looking at his growing capital, he realized his hard work was paying off and that with hard work came the fruits of that labor. He realized he was pretty good with money, too. He started thinking maybe his purpose was to be a really good boss.

In the early days of Seven2, not unlike other companies, Lafferty says he and Murto would make regular donations to local charities by writing a check.

"We'd joke that we'd walk down, drop it off, pat each other on the back — 'Good job! Wow! We're doing something good for the community!'" he recalls.

But those donations only reflected himself and Murto. The success of Seven2 has been mostly thanks to the blood, sweat and tears of its employees, he says. And he wanted the donations to reflect them.

So he got an idea.

What if he took the money already slated for charity and divided it among company employees and said "give it to a charity of your choice," regionally, nationally or internationally. The only requirement is that employees also write a "giving story" before the end of December about who or what they gave to.

"What Nick and I wanted to do was inspire givers," Lafferty says.

Employees get anywhere between $300-$500 to donate, but often they add some of their own cash, he says. Besides bonus day, the annual giving day is the employees' favorite day in the office, Lafferty says.

"Companies write big checks and give away lots of money, but the ability to give it to your employees and allow them to give it away and allow them to be a part of the process — it's the same benevolence," Lafferty says. "[Employees] get a lot of pride of being with a company that does that. It's really, really cool. It's a beautiful thing."

It's about building a culture of appreciation, he says.

"Nick and I have always said, 'Let's build a company that we'd want to work for.' We use that lens whenever we put in new principles or practices."

his position as a successful entrepreneur and employer. And despite his busy work schedule, he makes time to volunteer as an on-call delivery driver for Meals on Wheels and spends 250+ hours a year volunteering as a board member (and often as a financial supporter as well) for a long list of local nonprofit organizations, such as Youth for Christ, StartUp Spokane, the Innovia Foundation and Active4Youth. More recently, he says he's been delving into diversity, equity and inclusion practices on those boards, working to ensure community members from all backgrounds have an equal seat at the table.

This might also be represented by Seven2's Silicon Valley-style office building, with its open floor plan and full gym in the basement.

In his office on the second floor, Laffferty says he's always been reluctant to accept awards or congratulations for his work.

"This?" Lafferty says as he reaches around to pat himself on the back. "I don't need that crap. But if that can possibly influence others, I'm all about it. If we can be that inspiration for someone else, that is super cool, and from an entrepreneurial standpoint, we have the ability to do that. We take that responsibility seriously." ♦