U of I basketball coach fired, scenes from Spokane Drag Queen Story Hour, and other headlines

PHOTOS: Protesters and supporters lined the streets outside of the Spokane Public Library's South Hill location over the weekend, where dozens of children heard story time from local drag queens.

ARTS & CULTURE: Need a quick breakdown on the new season of Black Mirror? We've got you covered. 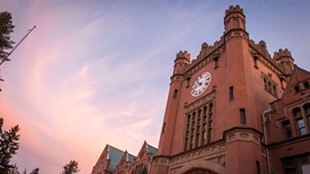 Whale of a problem
So many gray whales are washing up dead on Washington's beaches this year that waterfront beach property owners are being asked to voluntarily let carcasses decay on their properties because there aren't really other places to take them, the Seattle Times reports.

Appeals court says Spokane County should pay $7.5M ruling
A woman who was paralyzed from the chest down in a motorcycle accident should still receive $7.5 million in damages from Spokane County, an appeals court ruled, upholding the lower court's trial results where it was argued that the county didn't put the right warning signs at the curve in the road, the Spokesman-Review reports.