You're not going to let a little thing like a birth certificate convince you of someone's birth, are you? 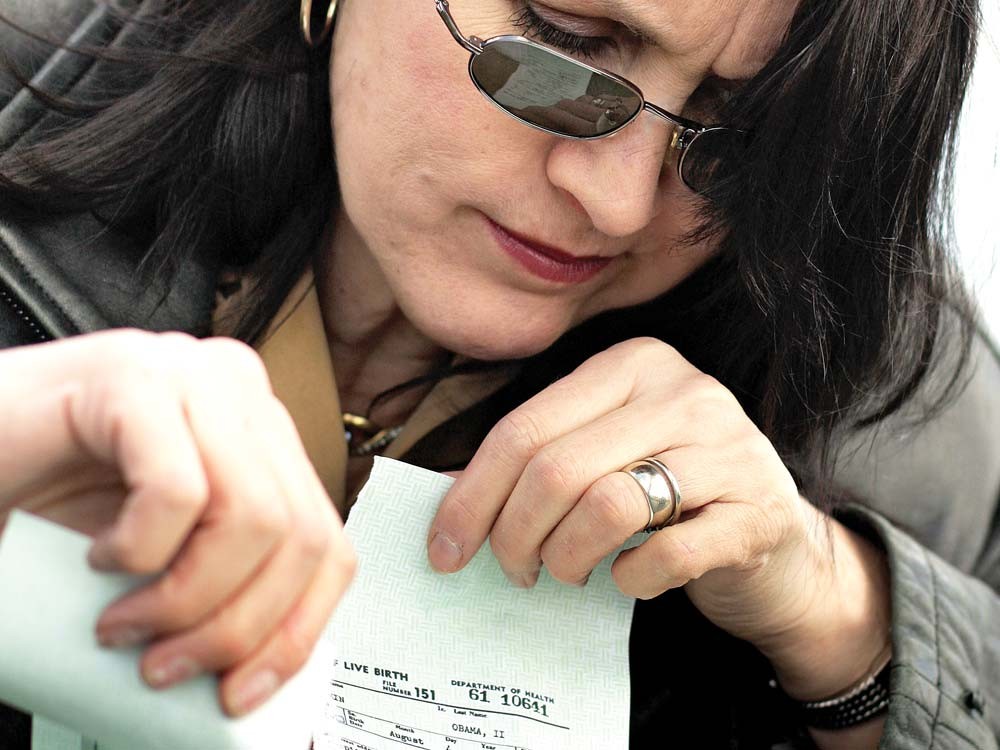 President Barack Obama, everyone knows by now, was born Aug. 4, 1961, at Kapi’olani Medical Center for Women & Children in Honolulu, Hawaii.

“Hey, maybe he was born in Hawaii, but there doesn’t seem to be any evidence pointed in that direction,” Roth says. “I think he lied. And he is covering up something.”

“[The certificate] was a fraudulent copy of God knows what,” Roth said on her conservative radio show Friday. “That’s been proven within 24 hours.”

Roth isn’t alone in the birther ranks of local conservatives. As vice chair of the county GOP, her conspiracy-theory crafting isn’t unusual — the previous chair of the GOP believed the United Nations was going to take over Spokane.

U.S. Rep. Cathy McMorris Rodgers put her foot in her mouth once as well, saying she’d “like to see the documents” from Obama’s birth. At a recent Tea Party Patriots rally in Coeur d’Alene, Washington state Rep. Matt Shea, R-Spokane Valley, opened with a zinger about how he had his birth certificate, if anyone wanted to see it. Several local tea party leaders continue to straddle the fence, giving variations on “we’ll probably never know for sure where he was born.”

It began with a chain email in 2008 purporting that Obama was born in Kenya, not Hawaii, making him ineligible to run for president.

As Obama and reporters tried to strike down the conspiracy theory, begun by Hillary Clinton supporters, it grew more powerful than they could have possibly imagined. By April 2011, one poll said nearly half of Republicans had doubts about Obama’s citizenship.

In response, Obama released his long-form birth certificate and asked the country to “get serious.”

But conspiracy theorists are anything but serious. Within moments of Obama releasing his longform birth certificate, a new birther gospel was written — that the document was a fraud.

For one, the theorists say, it lists Obama’s father’s birthplace as Kenya. But back then, Kenya was referred to as East Africa. (The certificate — surprise! — lists both.)

And if you open up the birth certificate in Adobe Illustrator, you can see several different “layers,” suggesting that it was digitally manipulated. According to Adobe expert Jean-Claude Tremblay, it’s not true. The layers are simply artifacts of the off-the-shelf scanning equipment.

And even if it were real, some birthers argue, Obama is technically a British subject because his father was Kenyan. This disqualifies him as a “naturalborn citizen.”

“That’s just wrong,” says Brooks Jackson, with FactCheck.org. “People who say that should read the Constitution.” The 14th Amendment defines anyone born in the United States as a citizen at birth.

Local conservative leaders, meanwhile, must decide how to deal with “birthers” going forward.

Shea, for his part, didn’t return our phone calls.

In the past, Dann Selle, a leader in the Spokane Tea Party, forwarded birther emails — but stopped recently. Just the fact that there’s such a big controversy around the certificate, he says, raises questions. He brought Stephen Pidgeon, a lawyer who sued to try to force the Washington secretary of state to investigate Obama’s citizenship in 2008, to speak at a Tea Party rally.

“Now that a birth certificate surfaced, it is challenged and there will be no end to it,” Selle writes in an email. “The truth of the birth certificate and who assassinated Kennedy may never be known or accepted.”

“Maybe I’m wrong,” says Roth, the GOP vice chair. “But why did he wait so many years? I question what he says and what he does because I caught him in so many lies.”

And what would it take to convince Roth to change her mind about Obama’s birth?

Easy, she says. The release of his actual non-fake birth certificate.