Combine Thor with a little Shakespeare and you've got yourself a good time. 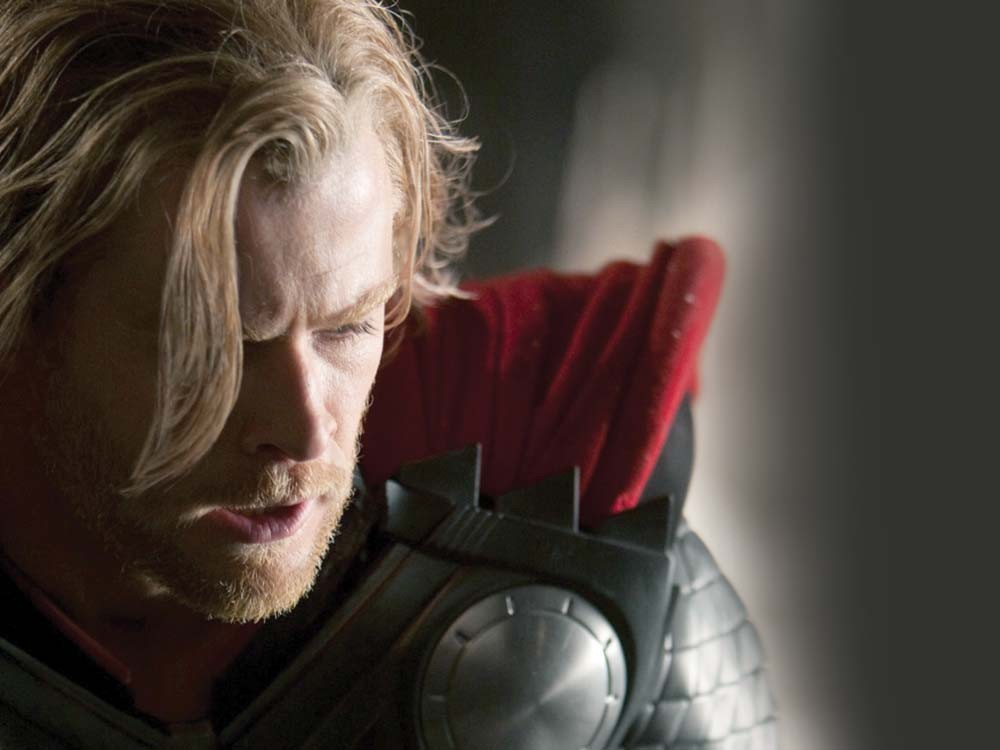 The god of thunder: fun to watch and easy on the eyes.

I knew it! I knew Kenneth Branagh was a geek. Sure, he got famous for all that snooty Shakespeare stuff, but deep down, he’s mad for comic books and superheroes. He’s a dork. And this is totally clear from Thor. Branagh walks a fine line here between appeasing the strict fanboy contingent that doesn’t want to see its stuff messed with too much, and doing something fresh.

I respect Branagh’s previous work enough (he made Shakespeare fresh and modern and relevant) that I had hoped he’d bring some of the Bard’s timeless mojo to comic books. I thought he might meld the two worlds into a wonderfully trans-intellectual geekgasm.

Hamlet in tights, on ice? Why not? Imagine a Thor that made you fall in love with Asgard and long to bask in the reflected glory of the mythic gods of old.

But I didn’t fall in love with Asgard, or with Thor — though Aussie up-and-comer Chris Hemsworth (George Kirk, briefly, in J.J. Abrams’ Star Trek) is delicious as the god of thunder. Thor the movie isn’t much more than a whole lotta uncomplicated fun that doesn’t insult your geek brain and does engage in more than a few moments that don’t look like anything you’ve seen in superhero summer blockbusters before.

These gods kick ass. And not always in a nice way.

Odin (Anthony Hopkins, because who else?) has to boot out his son, Thor, for being a “vain greedy cruel boy” for launching an ill-advised attack against one of the other universal realms (the one that makes me think Branagh is jealous of Peter Jackson).

So Thor ends up on Earth, where he loses his divinity and gets some lessons in humility and the like. He mostly ends up getting tased by nervous ladies who think he’s weird — if hot — and having other amusing you’re-nota-god-anymore stuff perpetrated upon him.

Much of this involves sedatives and Pop-Tarts, and represents an unexpectedly gentle and human sense of humor on the film’s part.

I’m not sure which of the five credited screenwriters (that’s not counting those whose comic-book work this is based on) is responsible for the funny stuff. But I’m pretty sure it’s because there are five credited screenwriters that too much of the rest of the film feels calculated and self-consciously constructed as a setup for future Marvel movies rather than working as a standalone story in its own right.

Maybe that means that Thor’s brother Loki (Tom Hiddleston, who steals the film) will actually get to go to town in the next movie. The complicated is-he-or-isn’t-he-evil bit Loki’s got going here keeps getting shoved aside in favor of some ass-kicking action when what it really needs is a soliloquy and maybe some sneaky skulking around the halls of Asgard. It may be par for the comic-book course that the putative villain is so much more intriguing than the putative hero that you wish the whole movie was actually about him.

Still, a Jeremy Renner cameo! A Stan Lee cameo! Natalie Portman as an astrophysicist! And Clark Gregg wisecracking his way through a mostly thankless role as S.H.I.E.L.D. Agent Coulson — he gets to spearhead an Iron Man reference.

All of it is better than Clash of the Titans, by a whole bunch. And that’s good enough.