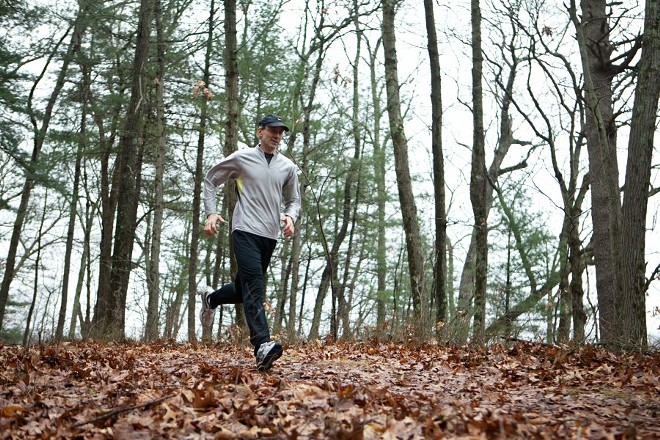 Kayana Szymczak/The New York Times
Dr. J. Michael Gaziano, a Harvard cardiologist, out for a run on trails in Dedham, Mass., Dec. 23, 2014. Federal researchers say they have conclusively determined that ideal blood pressure rates are far lower than the current guidelines, ending the study more than a year early in order to disseminate the life-saving information. “This study will shake things up,” said Gaziano, who was not involved with the study.
By GINA KOLATA
© 2017 New York Times News Service


The nation’s leading heart experts on Monday issued new guidelines for high blood pressure that mean tens of millions more Americans will meet the criteria for the condition, and will need to change their lifestyles or take medicines to treat it.

“Those numbers are scary,” said Dr. Robert M. Carey, professor of medicine at the University of Virginia and co-chair of the committee that wrote the new guidelines.

The number of adults with high blood pressure, or hypertension, will rise to 103 million from 72 million under the previous standard. But the number of people who are candidates for drug treatment will rise only by an estimated 4.2 million people, he said. The rest should be able to meet the goals with lifestyle changes.

High blood pressure is second only to smoking as a preventable cause of heart attacks and strokes, and heart disease remains the leading killer of Americans.

If Americans act on the guidelines and lower their blood pressure by exercising more and eating a healthier diet, or with drug therapy, they could drive an already falling death rate from heart attacks and stroke even lower, experts said.

Cardiovascular disease remains the leading cause of death among Americans. The new criteria, the first official diagnostic revision since 2003, result from growing evidence that blood pressure far lower than had been considered normal greatly reduces the chances of heart attack and stroke, as well as the overall risk of death.

Recent research indicates this is true even among older people for whom intensive treatment had been thought too risky.

That calculation must be individualized, and experts are recommending that patients use a calculator developed by the guidelines committee at ccccalculator.ccctracker.com.