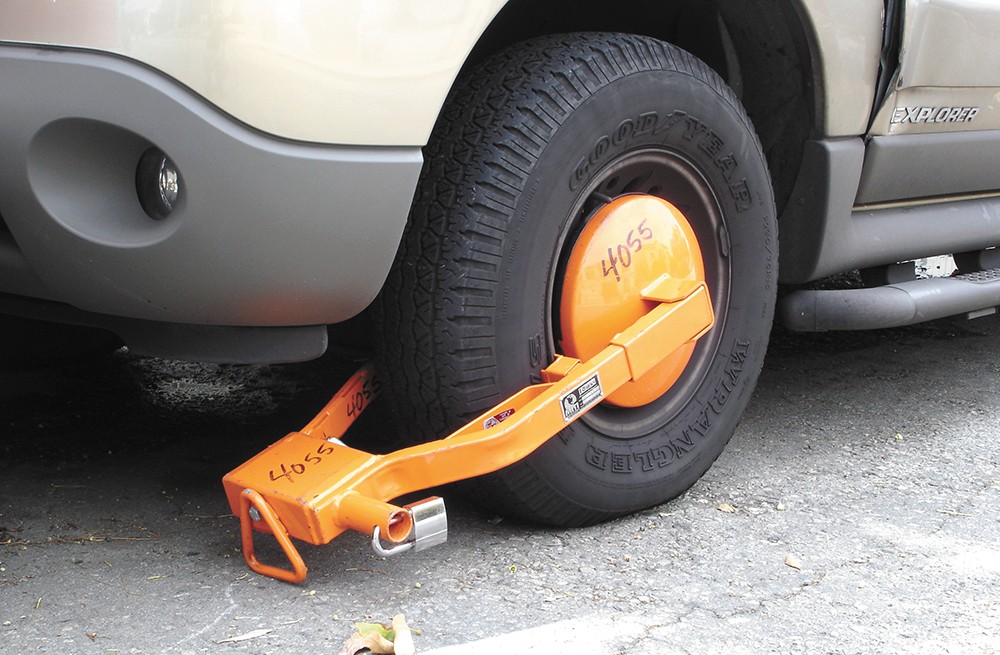 The latest step in the city's parking overhaul: a booting program

In a database at City Hall, officials track more $4 million in unpaid parking tickets, often seeing the same names — about 3,500 "frequent flyers," who have four or more unpaid tickets — appear over and over again. Now, one man thinks he has a way to target just 10 or 20 of those drivers and make the whole lot listen.

Dave Steele, with the city's Business and Development Services Department, has been leading the overhaul of parking downtown: credit-card-friendly meters, sensors to erase extra time when cars leave parking spots and now tire boots to immobilize cars when the owner has four or more unpaid parking tickets. The city council will vote in coming weeks on the booting program, and Steele says he hopes to buy between 10 and 20 boots at $500 each early next year.

"We want to just have enough of them present that people recognize, 'Oh yeah, you've got to pay your parking tickets,'" Steele says, emphasizing the program is more about perception than trying to boot every offending owner.

The ordinance would give parking enforcement officers the authority to add someone with four or more unpaid tickets in collections to a "scofflaw list" and boot the car if the owner doesn't respond by paying the tickets, beginning a payment plan or challenging the tickets in court within 10 days. After 48 hours of being booted with no response from the owner, the city will impound the car. Making it onto the scofflaw list comes with a $25 fee and getting booted will cost drivers another $50, but it's still unclear which impound lot the city will use and therefore how much it'll cost owners, on top of outstanding tickets, to get their vehicles out of impound. (The Spokane Police Department contracts with tow companies when they impound vehicles. Towing starts at $178 an hour and impoundment at $45 a day, increasing with the size of the vehicle, according to the Washington State Patrol, whose rates SPD uses.)

Councilman Mike Fagan, who supports the program, says the city "bends over backwards" to give people chances to pay their tickets. The city's new parking meter system will make it possible to pay tickets online starting next month.

"We are definitely a very, very forgiving and very, very accommodating government," he says, "but, you know, patience does tend to run out from time to time. ... I think that's what we're seeing right here."

If passed by the council, the law would take effect in early January, but the city would offer an "amnesty" period, warning people with enough tickets to get booted, but not actually booting them until the summer. Steele says he's still working with the municipal court to determine just how much help he can give people looking to pay off their debt before losing their vehicle to an impound lot. He's hoping the court will agree to allow people to clear their record by paying the base amount owed for the tickets, forgoing the interest and fees added by collections, but told a council committee meeting last week "courts are very reticent to give away what they see as public money."

Fagan and Steele say they believe most of the people racking up tickets are refusing, rather than unable, to pay them. Center for Justice attorney Julie Schaffer isn't so sure. Among its work on behalf of low-income people, the legal nonprofit runs a relicensing program to help people who've had their licenses suspended for failing to pay traffic tickets to get on payment plans and get their licenses back. (A recent change in state law means drivers can no longer have their licenses suspended for non-moving violations, like parking tickets, but Schaffer says it's likely many of the clients she sees also have unpaid parking tickets.)

While Schaffer says she's glad a payment plan is an option in the booting program, she's still worried about its potential impact on people who've been avoiding their tickets not out of spite for the city, but because they simply can't afford to pay them. Schaffer says she's concerned the method of warning people they've made the list (by mail) is unfair to those who may move often, and she would like to see a community service option for people who can't find the money to pay their tickets.

"You can't get money out of people who don't have any money," she says. "Adding additional financial barriers is not going to help." ♦

The top four offenders and how much they owe. City of Spokane Parking tickets range from $10 to $450, depending on the offense. Data from Spokane Municipal Court.

CORRECTION: This list, provided by the city, had included Matthew R. Hardie; however, Hardie died in 2010. City officials have previously told the Inlander they won't pursue collections against Hardie, but that in a quirk of the law, the fines will remain on the books for 10 years before being erased.

Weinstein found guilty of rape, Spokane looks at pricier parking, and other headlines