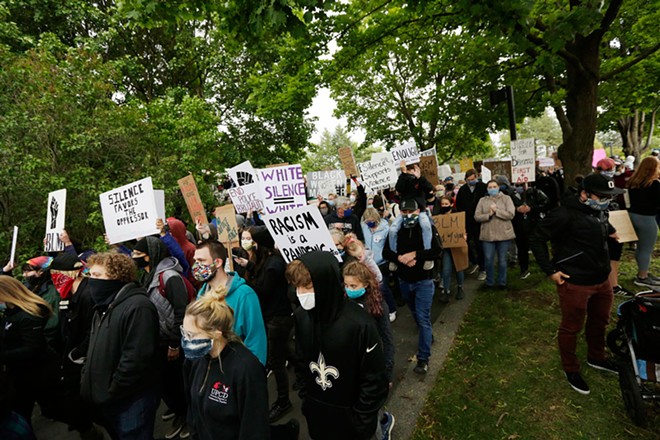 Young Kwak
Anti-racist activists in Spokane march in support of Breonna Taylor, who was killed by Louisville police officers.

At a campaign event in Jacksonville last month, Donald Trump condemned “critical race theory,” going so far as to call it a cancer, one that his administration was working to swiftly and efficiently remove. Then the administration released a memo directing federal agencies to identify all trainings on critical race theory or “white privilege,” and move to defund them. In a subsequent executive order, Trump doubled down, positioning himself as the last surgical line against millions of dollars being spent on “divisive, anti-American propaganda.”

Campuses such as University of Iowa and John A. Logan College in Illinois are already suspending diversity and inclusion programs as a result of the order. And the effects go beyond universities. The Washington Post notes that the order has seen resistance from a broad spectrum of groups, from medical fields to the tech industry, who feel it is a political overreach with disturbing implications.

If this is the first time you’re hearing these terms, you may be confused, especially since Trump continually pairs them with terms like “scapegoating” and “propaganda.”

We talked to local professors to explain what the terms mean and how they contribute toward more accurate understanding of our nation’s past and present reality.

Dr. Jessica Maucione, an English professor at Gonzaga University, says critical race theory, as a practice, can be broken down into two main ideas. “The first is the understanding that race is a social construct,” she says. “The important co-piece is that the construction [of race] has a real, measurable impact on individuals and groups. Whiteness as a category tends to be associated with experiences of white privilege.”

Dr. Judy Rohrer, director of Gender, Women’s and Sexuality Studies at Eastern Washington University, provides context for Trump’s moves: “By mobilizing colorblind ideology, these attacks turn civil rights arguments on their heads,” she writes in an emailed statement. “In short form, they argue that discussing and/or dismantling racism and sexism is itself racist and sexist.”

Angela Schwendiman, a professor in the Africana Studies Program at EWU, studies and teaches African American culture, particularly film and media. “I don’t just look at the subjugation itself,” she says, “but the ways African Americans were able to reconstruct a cultural identity separate from their colonization.”
click to enlarge


Schwendiman uses critical race theory in her work and wants people to understand that its purpose is to make society more equitable and more fair.

Of course, a complete history of race in the United States would be impossible to encapsulate here, but in order to comprehend where we are now, we need at least a cursory detour through our past.

First, Schwendiman stresses, we need to understand that white privilege is baked into the construction of our country.

“It boggles my mind when people say that white privilege doesn’t exist,” she says. “We’re not talking necessarily about economic gains. We’re talking about socially and psychologically having the benefit of not being Black. We’re talking about the advantages of belonging to the dominant culture. Everything we think of as being protected by the original Bill of Rights, which later on is going to be protected by constitutional amendments, those things were not applicable to Black people here in America.”

After slavery was abolished, racism didn’t magically disappear, which is why the civil rights movement was necessary. Even then, while explicit white supremacy was taken out of our laws, disparities continued.

“Even though the 1960s led to landmark legislation, it didn’t dramatically change our practices,” Schwendiman explains. “So, in the late ’70s, scholars at UCLA law school started looking at and examining more clearly the role of race, power and privilege and how laws are carried out. They found that so-called race-neutral policies weren’t actually race neutral. Because we got rid of those laws that targeted people based on their race, we thought we would see problems go away. Instead, it just transformed them.”

Though they are ever-present in the lives of people of color, these transformed problems can be harder to see and fix, because they are less explicit. That’s why there can be debate as to whether or not something like white privilege even exists.

“It’s invisible because it’s just normal. A Black person walking or living in Spokane or Cheney (where we only make up 1-2 percent of the population) can be stopped because you fit a description or look suspicious,” Schwendiman says. “Critical race theory asks: Why are we seeing these huge disparities? What other stories are we missing? We need to get the stories of people of color, of how they are experiencing these laws, and use those stories to interpret these statistics.”

Just as the struggle for racial justice is not new, neither is the kind of rhetoric that Trump is espousing in the opposite direction.

“What concerns me is that we have enough people who feel the way he does in our society. He is reflecting what other people feel,” Schwendiman says. “The resistance certain people have to change has always been the same. But there’s a consciousness now that I have never seen in my lifetime. White supremacy and denial in the highest office has made it bubble up to the surface.” 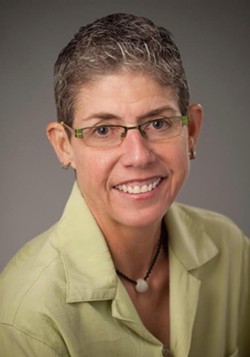 Rohrer echoes a similar sentiment regarding increasing social action: “It’s not surprising that this desperate attempt to try to push the current movement for racial justice under the rug is happening now. Seventy-six percent of Americans now think racism is a ‘big problem,’ which is a 23 percent increase over the last five years. I see this playing out with white Eastern students who are hungry to learn the hard truths about our history and are eager to be part of these exciting movements for social justice.”

At Gonzaga, Maucione has observed a similar shift. “There was a time when most of my job was convincing people that racism existed at all,” she says. “Since 2016, that's no longer my job.”

“It is definitely scary that the 45th president of the United States would publish an order like that,” she continues. “It just demonstrates just how out of touch he is with the reality of what diversity training and critical race theory are. I have conducted diversity trainings for corporate entities and participated in them, and in every case, there’s a real concentration on never placing blame, and never using shame as a tactic to try to combat white privilege or white supremacy.”

All of the local scholars contextualize the Black Lives Matter movement in an ongoing struggle for justice: a push that is urgent, inclusive, and necessary.

“People are willing to sit down in discussions and find out what we can do to reconcile,” Schwendiman says. “And that’s where my hope comes from. It’s entirely possible. It’s not going to be easy, but we can do this.”

READ MORE
If you are interested in learning more about critical race theory or white privilege, here are a couple of books that the professors recommend:
Claudia Rankine, Citizen: An American Lyric
Eduardo Bonilla-Silva, Racism Without Racists: Color-Blind Racism and the Persistence of Racial Inequality in the United States (5th Edition)