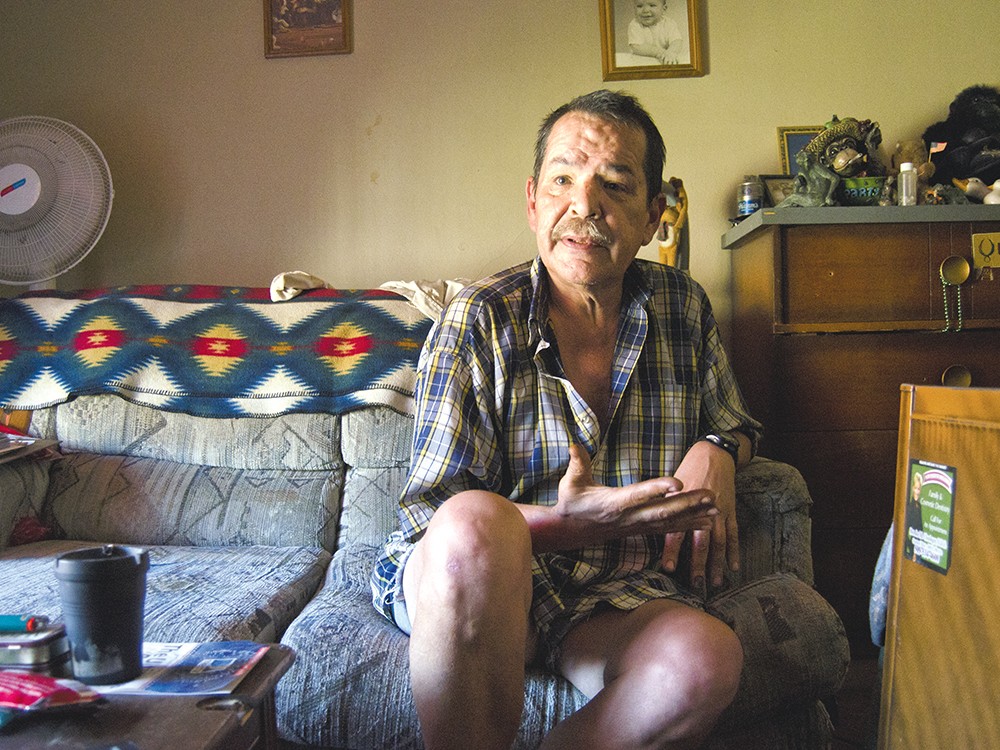 Jacob Jones
Michael Devenere, 54, says his unit in the Danmor Apartments may be small, but "this is home."

An unexpected and unexplained letter threatened to uproot Michael Devenere’s entire life. After nearly four years of living in the Danmor Apartments in downtown Spokane, he came home last week to find a “Notice to Terminate Tenancy.”

“If you do not surrender possession of these premises on or before the date set forth,” the letter states, “judicial proceedings will be instituted for your eviction.”

Devenere, 54, felt betrayed. He takes good care of his unit and keeps to himself. He often pays his rent three months in advance. The letter, delivered July 8, gave him just 22 days to move out.

All 14 of his neighbors received the same notice, their letters littering the front entryway. With many on Social Security, veterans benefits or other fixed incomes, Devenere says they have few options for affordable housing in downtown.

“To get kicked out without any explanation,” he says, at a loss. “This is my home.”

A couple days later, the Danmor building owners reversed their decision and rescinded the eviction orders. But Devenere says the incident highlights the insecurity of local low-income housing and the limited protections for tenants living on month-to-month rental agreements.

“Most of us have been here for a long time,” he says, “because we have nowhere else to go.”

The Danmor Apartments on Third Avenue has stood for 106 years. New blue paint covers the hallways, but behind several doors sit damaged and neglected units. Of the 36 total units, many have become uninhabitable.

Residents and building managers acknowledge problems with gang activity, drugs or vandalism over the years. But many respectful tenants also call the building home.

“We need those types of buildings,” he says of the Danmor Apartments.

People seeking low-income housing have a variety of local options, Peeler says, but demand remains high. Spokane’s downtown area continues to cope with the 2007 closure of the Otis Hotel, which displaced more than 100 residents.

“Since we lost the Otis, we’ve never really rebounded,” he says.

Spokane tends to lose one large housing building each year, Peeler says. Owners close up some. A few units get condemned over building code issues. Fires destroy other facilities.

Right now, SNAP continues to look for new homes for two of seven families displaced from the Sinto Apartments in June due to the fire at Geno’s restaurant. Peeler says a four-family building in West Central is also expected to close after being “red-tagged” over code violations.

With the federal sequester and local budget cuts, Peeler says low-income housing will have to compete with other priorities in the coming years. Closing the Danmor Apartments would have further stretched local housing.

“I’m glad that the owners changed their minds,” he says.

Walking the halls of the Danmor, David McKinsley peeks into vacant units with tattered walls and trash-strewn floors. Water runs steadily from a broken kitchen faucet. With a touch of disgust, he argues he shouldn’t be punished for problems with other tenants.

McKinsley, 70, lives on Social Security. He says he has resided at the Danmor Apartments for eight years. In that time, his rent has increased from $175 to $300 a month.

The sudden eviction notice left him angry and unsettled. He had just paid July rent. He says he has no family in the area to help with packing or moving expenses. How could he be expected to find and move into a new place in less than three weeks?

“They should have told us before,” he says.

Peeler says SNAP and other housing advocates pushed last year to introduce legislation to increase the eviction notice to 30 days. They also called for residents of four years or more to receive at least 60 days notice.

He says the Washington Landlord Association “crushed” those efforts before they ever made it to the floor.

An outraged McKinsley says he and his neighbors deserve better.

The co-owners hired Windermere Property Management to take over the building in April. Morin says Windermere was a “poor fit,” and continued problems left the other co-owners feeling like they had to close the building.

Morin says her family opposed closing the Danmor and decided to take over the management themselves. They started reaching out to tenants Saturday to cancel the evictions.

“We’re currently putting a plan in place to get a new [on-site] manager,” she says.

Morin says she is aware of some units that need significant work. Her family plans to make repairs and complete other remodeling, but they can work around the current tenants.

Devenere says he feels some relief, but remains uneasy in the wake of so many mixed messages.

“I think they owe everybody an apology,” he says.

He can’t help thinking of what he might face if another eviction notice comes down. He doesn’t want to leave his home. For now, he’s still skeptical of any promises:

“I’ll believe it when I see it in writing.”