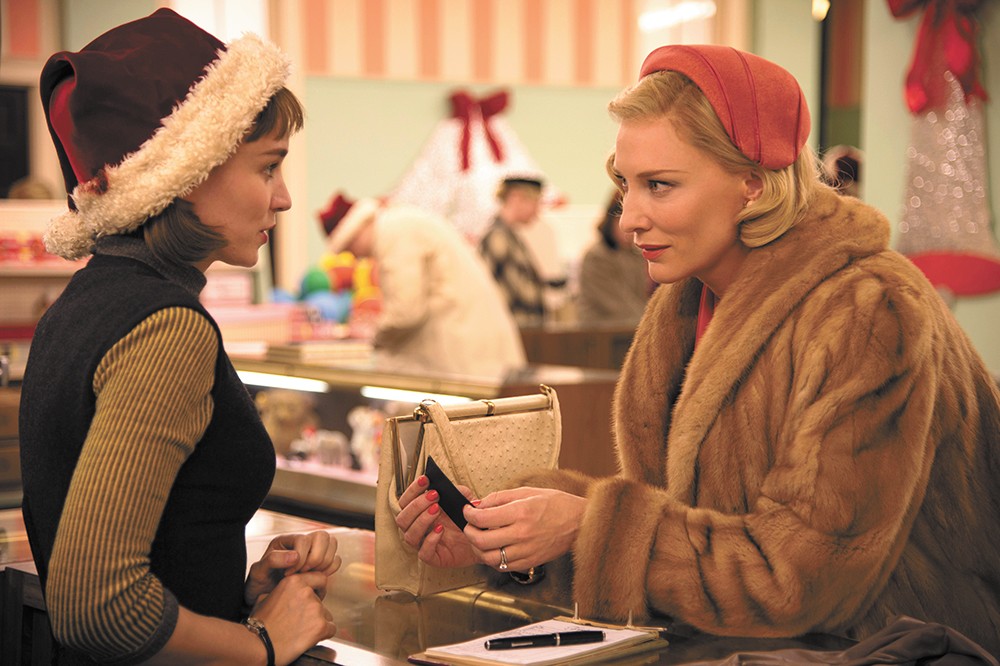 In Carol, all the elements dovetail perfectly

to create a movie as irresistible as its title character. The movie has an allure that is almost trancelike, mimicking for viewers the inescapable attraction experienced by the two main characters. The period production design is perfectly on point, as is the 1950s costume and set design. Ed Lachman's exquisite camerawork captures every minor detail with a virtually tactile sensibility that beckons the viewer to fall swooningly into the frame. Director Todd Haynes also has an unmistakable feel for the period (see Far From Heaven and Mildred Pierce if in doubt). The lead actresses, Cate Blanchett and Rooney Mara, deliver some of the finest work of this, or any other, year.

Adapted by Phyllis Nagy for the screen from a 1952 novel by Patricia Highsmith, Carol began life as a book titled The Price of Salt. It was Highsmith's second novel, published under the pseudonym Claire Morgan, presumably due to its lesbian content. When it was reissued in the '90s, Highsmith changed the title to Carol and published it under her own name. She was primarily known as a suspense writer; the lesbian romance of Carol is something of a departure in Highsmith's oeuvre, although it may also be the author's most personal work.

Set in 1952, the film first introduces us to Therese Belivet (Mara), a shopgirl in the toy department of a large Manhattan department store at Christmastime. Vaguely bored at work, Therese also seems discontented with her boyfriend Richard Semco (Jake Lacy), who wants nothing more than to marry her — a proposal she regularly sidesteps. Her torpor is punctured by the arrival in the toy department of an elegant blonde woman in a fur coat. Not having the doll desired by the woman's daughter in stock, Therese sells the woman, Carol Aird (Blanchett), a train set instead. Polished and sophisticated, Carol seems to be everything the mousy-haired Therese, who is dressed in a sensible jumper and a demeaning, work-mandated Santa hat, is not. The intrigue begins.

At least a decade older than Therese, Carol is the mother of a 4-year-old, and is in the process of getting divorced from her wealthy and unresigned husband Harge (Kyle Chandler). Since their daughter is scheduled to spend the Christmas holiday with her father under a mutually amicable custody agreement, Carol decides to drive west for the holiday. On a whim, she invites Therese to join her. Each woman is drawn to the other — Therese, ironically, by Carol's urbanity, and Carol by Therese's jejuneness. Their mutual attraction is consummated in — of all places — Waterloo, Iowa.

Life's realities harshly interrupt their affair, yet like the book, the film ends on a positive note. With its Douglas Sirk-like tendencies, Carol feels like a movie that Haynes has always been destined to make. From the nail polish to the shoes, and the music (by Carter Burwell) to the old Packard, there's not a hair or glove out of place. Even the contrast between the acting styles — Blanchett's languor vs. Mara's feral gaze — feels of a piece with the film.♦

Carol is not showing in any theaters in the area.