United by Song and Dance 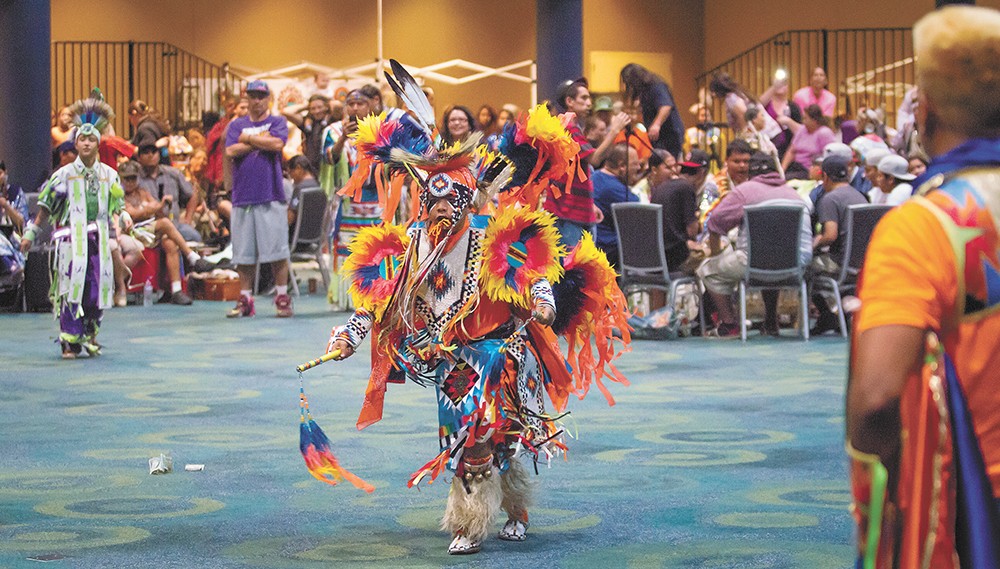 When the sun sets on Spokane's Gathering at the Falls Powwow,

the dancing continues. Throaty singing rings out across the softly lit summer grass amidst the rhythmic chimes of bells attached to elaborately dressed tribal dancers.

They dance about the field, joyously bobbing and stomping as comfortable onlookers watch from the sidelines, contentedly transfixed. Such scenes at the event create the sort of atmosphere that powwow co-chair Shane Garcia has trouble putting into words.

Those feelings that Garcia mentions are important aspects of the annual event. It's a celebration that aims to unite attendees across cultures and ethnicities under a common banner of positive feelings.

"We try to emphasize that we're more a family than individuals," Garcia says. "We try to interlink a lot of culture and having fun."

Fun won't be hard to come by at the powwow. The event takes place over the course of two days, and includes a schedule packed with traditional Native American song-and-dance performances and competitions featuring talent of all ages, from "tiny tots" all the way up to adults. The festival also boasts a diabetes fundraiser run, a hypnotist show, a family fun day, and a myriad of arts and crafts vendors.

The Gathering at the Falls Powwow has been a Spokane mainstay since its beginning 25 years ago, drawing between 3,000 and 4,000 visitors annually. Garcia says that the event now attracts attendees from all across the United States, as well as from Canada and Mexico.

"I think more people are learning that it's not just for Native Americans," Garcia says. "Generally there's still a belief that it might just be for Native Americans. We're trying to educate everyone that this is a cultural event that we share with other populations. It's for everybody."

Last year, due to air quality concerns connected to rampant wildfires, the powwow was moved indoors to the Spokane Convention Center at the last minute. This year, the event returns to the Lilac Bowl at Riverfront Park.

Though certain nearby tribes, such as the Kalispel, also host their own powwows which are open to the public, the Gathering at the Falls Powwow is unique in that its scope necessitates multiple sources of funding.

"We have to try to get support from a lot of businesses or individual sponsors," Garcia says. "Some tribes do provide sponsorship of the powwow in some ways, but it's not a significant amount."

A conglomeration of local tribes, including the Spokane, Colville, Kalispel and Coeur d'Alene tribes, are actively involved in the organization of the powwow, and Inland Power and Light, Kaufman & Associates, the Native Project and other businesses and groups help to provide the fiscal support that makes the event possible — and which ensures it can continue to take place on a yearly basis. Garcia emphasizes the importance of the powwow's continued annual existence.

"It creates a sense of identity for the Spokane community that we are participating in a community event and are in the presence of a Native American population," he says. ♦