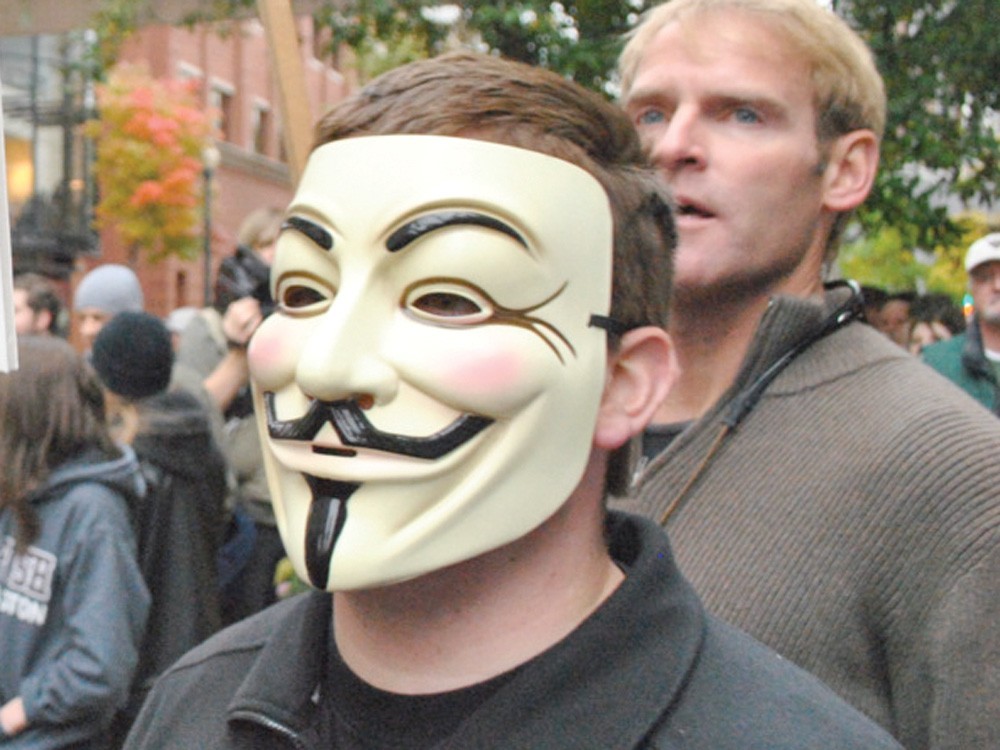 Chris Stein
A man wearing a Guy Fawkes mask during an Occupy Spokane march in October
This Saturday marks the 406th anniversary of the attempt by Catholic revolutionary Guy Fawkes to blow up Britain’s House of Lords. Fawkes’ visage has become ubiquitous at the nationwide Occupy rallies. It’s also Bank Transfer Day, a push by the Occupy movement to move cash out of the hands of a “mega-bank to a local credit union.”

“Many people are still banking with one of the big corporate banks that gambled with our money, paid millions in executive bonuses and then were bailed out by taxpayers,” the statement reads. “This might just be out of inertia (banks count on this) or you may not be aware of the better alternatives that already exist.”

But at least one local credit union — STCU — is helping to show that they are the alternative by waiving membership fees through November. And Tom Johnson, the credit union’s CEO, took to KXLY 920’s airwaves Tuesday morning.

“We’ve seen about almost a 50-percent increase in new memberships during the month of October,” he said, adding that more than 1,400 people joined the credit union last month.

And while no one mentioned Occupy in the interview, Johnson took aim at the “large banks” and their subservience to investors.

Of course, STCU and other credit unions have benefited from Occupy, the nascent movement that believes corporations have too much power compared to the common American. On its site, Numerica is even promoting bank transfer day.

One of the more popular chants at rallies has been, “Banks got bailed out, we got sold out.” And it didn’t help that Bank of America instituted a $5 monthly fee for use of a debit card. This week, the bank announced it was rescinding that fee.

As on every Saturday for the past month, Occupy Spokane will march in downtown Spokane beginning at noon. (Nicholas Deshais)

It’s a rare move for two politicians, but things have grown so heated between Bonner County Commissioners Mike Nielsen and Lewis Rich that the third commissioner, Cornel Rasor, suggested all three of them go into mediation. Nielsen and Rich agreed — and mediation should begin Monday.

Rich didn’t want to comment on the specifics of their conflict. “I really think that would be detrimental to the process — after Monday, I might be able to comment,” Rich says.

But Nielsen was willing to share his frustrations: “In a single word, it would be ‘ethics.’”

He says Rich threatened to vote against a politically unpopular budget when he’d already agreed to support it, and tried to re-open the bidding process for a health insurance broker after the new carrier had already been picked. And he’s shared his low opinion of Rich’s ethics publicly.

“I don’t dislike Mr. Rich,” Nielsen says. “I can get along with the devil. But I won’t compromise my ethics to do it.” (Nielsen is the same commissioner who, a few months ago, suggested the county only hire non-smokers to save on health care costs.)

The mediation will be paid for by the commissioners. Rich, short on money because of his wife’s medical issues, says that an anonymous donor has provided the funds for him.

Sandpoint Assembly of God Pastor Brian Wilson, who usually opens the commissioner meetings with a prayer, will oversee the mediation.

“He’s a certified mediator in a lot of areas,” Rich says. “I’m hoping we can come to an agreement to eliminate some of the harshness. I’m optimistic.” (Daniel Walters)