'Unreasonable Threat to Life and Property'

Spokane's rental housing has problems, but landlord and tenant groups are split on a solution 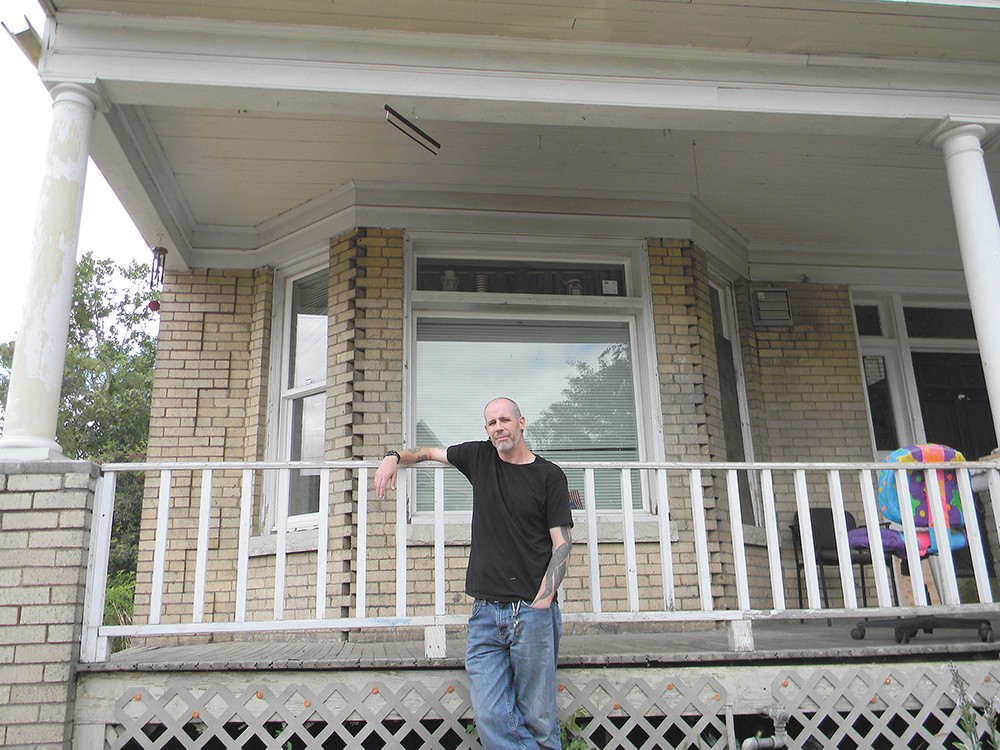 Jake Thomas
When Benjamin Loraas moved into an apartment on West Augusta Avenue, he thought it was a step up. But he now worries he'll be pushed back down.

A miracle turned into a nightmare at the apartment complex on West Augusta Avenue.

About a year and a half ago, Benjamin Loraas and Kami Holgate were living in homeless shelters. They wanted to regain custody of their son, but were told they'd need stable housing first. With the help of a local nonprofit, they secured a one-bedroom apartment in the basement of a house that had been converted into an eight-unit apartment complex. The small $525-a-month apartment had scuffed wood-panel walls, and the windows were in various states of disrepair, either broken or missing a pane. But they had their son. They were home.

"We were ecstatic," recalls Holgate.

Things went downhill from there, they say. Their landlord had the windows repaired, but they were either nailed shut, boarded up or sealed with a glaze, creating a potentially perilous situation.

In December, they say the apartment above them flooded, and they worry that the ceiling is falling apart. A rat chewed a hole through the drywall in the kitchen where the sink is full of dirty dishes, because the faucet has no running water.

"He thinks the city will let it go like it has for the last 30 years," says Holgate.

But now the city isn't letting it go, and the building's tenants will bear the brunt of the fallout. Although neighbors complained about the property for years, it wasn't until July 20 that the Spokane Fire Department sent a letter to Radke calling the building an "unreasonable threat to life and property." It listed 14 problems that needed to be addressed, including extending the fire escape ladder to the ground, putting emergency exit windows in the basement, repairing plumbing and fixing hazardous electrical wire, as well as installing carbon monoxide and smoke detectors in units.

When reached by the Inlander, Radke declined to comment, but said the building is safe and he would have no problem using the fire escape. As of press time, Assistant Fire Chief Brian Schaeffer says the the fire marshal is considering condemning the basement and top floors of the unit.

"It's not the tenants' fault," says Schaeffer. "They are the ones who suffer here."

Although the city contracts with Spokane Neighborhood Action Partners (SNAP), a local nonprofit, to help relocate displaced tenants, Loraas says there are few openings in Spokane's tight rental market, especially for anyone with criminal offenses on their record. "I'm worried about being forced into homelessness," he says.

Teri Anderson, Tenants Union of Washington State's Spokane-based community organizer, says that situations like this are proof of the city's failure to hold landlords accountable. She says that state landlord-tenant law makes it too easy for landlords to intimidate tenants, keeping them from complaining to code inspectors. As a result, she says, buildings fall into disrepair while landlords continue to cash rent checks.

"I just feel like we are in the wild, wild west here when it comes to landlords and tenants," says Anderson. "Our landlords don't even hold a business license."

That could be changing. Spokane's decaying housing stock and neglectful landlords have caught the attention of city leaders, some of whom are interested in joining other Washington cities that have embraced greater regulation of their rental housing markets. But landlords in Spokane say that more regulations will deter needed investments in rentals and ultimately hurt tenants who are already facing a historic housing crunch.

Alexander Scott, vice president of the Landlord Association of the Inland Northwest, says that most landlords are responsible. While he says the building on West Augusta Avenue is troublesome, he claims that weeding out unscrupulous landlords can be accomplished through a better use of existing laws.

"It's already a marginal business," says Scott. "Somebody is going to have to pay [for the new regulations]." That somebody, he says, will be tenants.

Spokane has lots of rental housing

The issue has caught the attention of the Community Assembly, a coalition of the city's neighborhood councils. Last year, it directed its Public Safety Committee to convene a stakeholders group comprised of individuals representing tenants, landlords, public health officials, neighborhood groups and others to identify issues involving rental housing and make recommendations. But Scott, who served on the group, says things became polarized.

"We ended up with no consensus," he says. "It ended up in a bit of a farce, which was unfortunate."

One of the bigger points of contention for the group, which disbanded last month, concerned evictions. State law doesn't require landlords to tell tenants not covered by a lease why they are being evicted. Anderson, who also served on the stakeholders group, says the law allows landlords to kick out tenants who complain about conditions of their rental. Because code enforcement in Spokane is complaint-driven, she says that tenants, worried about moving costs or a black mark on their rental record, might keep quiet about needed repairs.

"They don't like living in substandard housing, but it's better than living under a bridge," says Anderson.

During the process, she suggested a "just cause" ordinance, similar to one in place in Seattle that requires landlords to give tenants a reason why they are kicking them out (i.e., nonpayment of rent, causing damages).

Eric Steven, a Spokane lawyer who represents landlords, says that requiring a just cause unduly infringes on property rights. He also says that under state law, if a landlord evicts a tenant 90 days after they complain to a government agency, it's presumed to be retaliatory.

To evict a tenant in Washington, a landlord needs to file for an unlawful detainer action in court, asserting that they have a justified reason to take back their property. In Spokane County, the number of these filings has risen from 1,332 in 2010 to 1,719 in 2015.

Steven says he charges landlords $750 for a clear-cut eviction. A more complicated eviction, he says, can cost more than $10,000. That can happen when the tenant has a lawyer, like Barry Pfundt, an attorney with the Center for Justice who represents low-income renters.

"[Landlords] know that not a single aspect of the residential landlord-tenant law is self-enforcing," says Pfundt. According to Pfundt, who says there are just three attorneys in Spokane who routinely represent low-income tenants, landlords can easily overcome the presumption of retaliation by giving another reason for the eviction. Pfundt says he has successfully used the retaliation defense only once.

During the stakeholders group meeting, Anderson called for a requirement that rentals be periodically inspected, similar to laws in place in Seattle and Bellingham, to ensure they're being maintained. That idea met resistance from landlords.

"They want to be able to come into the tenants' homes and look around at their stuff just like the British did in 1776," says Kevin McKee, a landlord and board member of the landlord association who served on the stakeholders group before stepping down.

Scott says rentals are major investments for landlords and they have an active interest in maintaining them. An inspection program, he says, will cost millions, which he says will be paid by tenants. He also points out that Spokane is experiencing a vacancy rate of 1.4 percent, which already makes it harder for tenants to find housing. New regulations will likely deter investments in much-needed housing, he says, and some landlords may opt for more upscale rentals.

One idea floated by tenant advocates, that Scott says his association is open to, is establishing some sort of list of rental properties, and who owns them. He says that can be accomplished through existing data kept by the county.

Jonathan Mallahan, the city's director of community and neighborhood services,

says that if a tenant doesn't feel safe in their rental, they shouldn't hesitate to reach out to the city for help. That's because since 2009, the city has contracted with SNAP to help households that make under 50 percent of the area median income, and are losing their housing as a result of a city regulatory action.

Bob Peeler, a SNAP housing specialist, has reached out to the tenants at the house on West Augusta Avenue. Although he has $2,000 available to help with each tenant's moving costs, he says they're scared. With a tight rental market, Peeler says he can pay for hotels for each tenant if need be, but he says that can burn up money fast. While Peeler says it's rare for the money to run out before the tenant secures housing, he says it does happen.

"We have a lot of low-income people looking for the same housing," he says.

Pfundt says the state landlord-tenant law allows cities to pass ordinances requiring landlords whose property has been deemed uninhabitable to pay for relocation assistance for their tenants.

"Relocation assistance is really a no-brainer fix that the city needs to implement," he says. "Instead, we give money to SNAP for assistance that isn't recovered and could be used elsewhere."

The task force concludes later this month. Afterward, City Councilwoman Amber Waldref, who serves on the task force, says she'll meet with stakeholders to consider a possible ordinance that could include registration and inspections of rentals.

"My goal is to find a way to take the burden off the tenants," says Waldref, who adds that some of the city's current tools aren't well suited for making sure that rentals are maintained. However, she adds, "I don't know if you'll ever have a way to fix every issue for every tenant." ♦