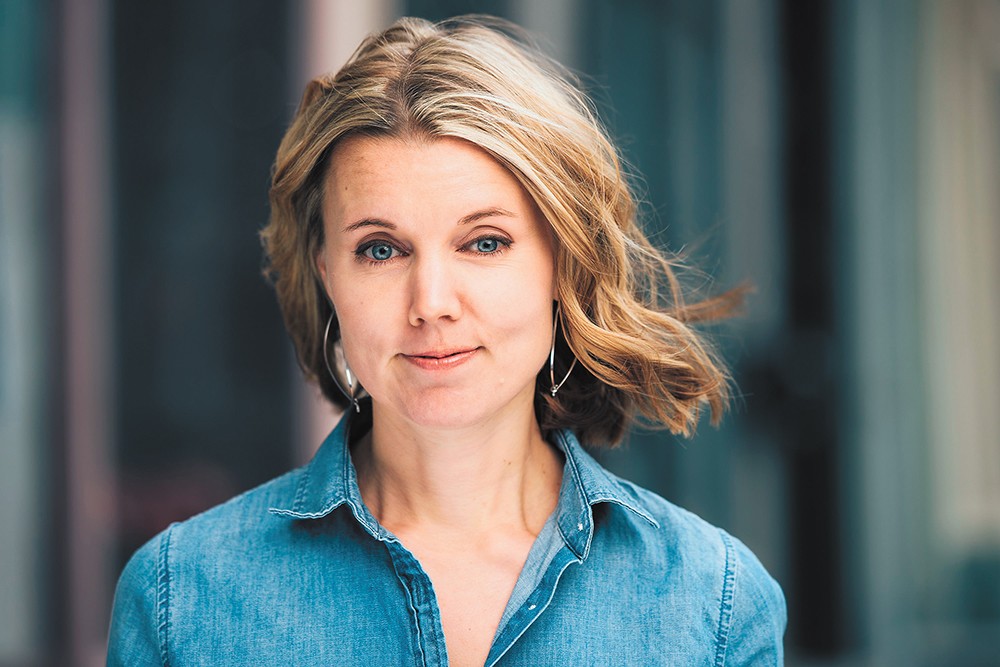 The pages inside dive into detail about Lena Dunham sex scenes, tabloid covers of Kim Kardashian's pregnancy, the "gender performance" of Caitlyn Jenner, the garish sexism of Bernie Bros, and the societal repulsion around Madonna's "ass in a leather corset."

In other words, at first glance, it seems in nearly every way the antithesis of the political conflicts inside North Idaho's Kootenai County Republican Party.

But that small-town Republican world is the one Petersen has spent the past two months immersing herself in for an upcoming BuzzFeed piece.

"I've been to Coeur d'Alene four times now," Petersen says. She's interviewed at least 30 people, following the tangle of grievance, politics, ideology and culture that have tied up Republicans in Kootenai County.

Petersen, a former Whitman College professor who wrote her Ph.D. dissertation on the history of celebrity gossip, moved from New York to Missoula this past summer to cover politics in the Mountain West for BuzzFeed.

She saw the story on her Twitter feed over the summer: A Kootenai County GOP resolution was praising Russia for resisting a "progressive globalist agenda" and denouncing Idaho's two U.S. senators, both Republicans, after they voted for Russian sanctions.

Now that, she thought, was interesting. When Petersen started digging into it, she says she found an "octopus," her term for a wonderfully complicated story with many confusing, slippery arms.

That's part of why she loves it. She covers culture. And politics — whether she's writing about the sexism that dogged Hillary Clinton's presidential campaign or the frustrations of North Idaho conservatives — is just as much about culture is as it as about policy.

"The micro can illuminate the macro in terms of trends and ideas," Petersen says. By that, she means that the views of individual Republicans in Montana and Idaho can, perhaps, tell her even more about politics than the statements of President Trump.

National reporters, of course, face a fair bit of skepticism

when they want to profile conservatives in Idaho and Montana.

"When I email these people, they are wary of me," Petersen says. They believe that a lot of the press is liberal, not the least a national outlet like BuzzFeed.

That's where her competitive advantage comes in. She isn't some New York journalist outsider parachuting into North Idaho, with clichés about quaint diners, "Make America Great Again" hats and flannel.

She grew up in North Idaho. She knows better than the idea that "every conservative in the middle of the country, in 'flyover country,' is the spittin' mad Trump voter that they saw in pictures and videos."

"I'm Idahoan," she tells her sources. "I'm dedicated to being fair. I have a stake in not doing a stereotypical piece."

Her dad moved her family out to Lewiston, Idaho, when she was 3, wanting to be closer to Glacier National Park. She was raised Presbyterian. Every summer she went to Camp Spalding, before it got all super-fancy, back when the cabins were "off-kilter, infested with squirrels." Zumiez in Spokane's NorthTown Mall became a crucial setting in the origin story of her fashion sense.

Auntie's — which hosts a reading of her book on Oct. 11 — was the big bookstore in the region, the one she "really thought was heaven on Earth."

It all left her with the ability to speak the language of conservatives and Christians.

"I grew up surrounded by conservatives. I went to church with conservatives," Petersen says. "There's not that sense of animus and alienness that a lot of people from the coast associate with those politics."

Trump's name only comes up once in her article on the Kootenai County GOP,

she says: "Mostly, I'm just trying to understand the tensions at work at the GOP that led to the rise of Trumpism."

In the past few decades, North Idaho politics has been infused with a wave of conservatives from California, who helped to turn a marginally blue state into a deep red one, Petersen says. The resulting political landscape is fueled by those who identify as retired Californians, and those who hold animosity toward newcomers. Often, these are the same people.

"It's not like these people manipulated their way in. They used the same political tricks and strategy as the more moderate GOP," Petersen says. "The people who have taken over control of the central committee, they spent a long time feeling unrepresented."

When she talks to them, she says, she's not looking for juicy quotes as much as understanding: Why do they do the things they do? What's the history and atmosphere that, say, results in Idaho Republicans accusing each other of being "RINOs" — Republicans in Name Only?

When she writes about, say, how actress Melissa McCarthy handles cultural scrutiny of her weight, she's not just focusing on McCarthy, her publicists and her press headlines. She's plumbing decades of history regarding how "fat" is defined and why that definition has mattered.

Facts or events are one part. It's the context around them — the culture — that gives them potency. ♦