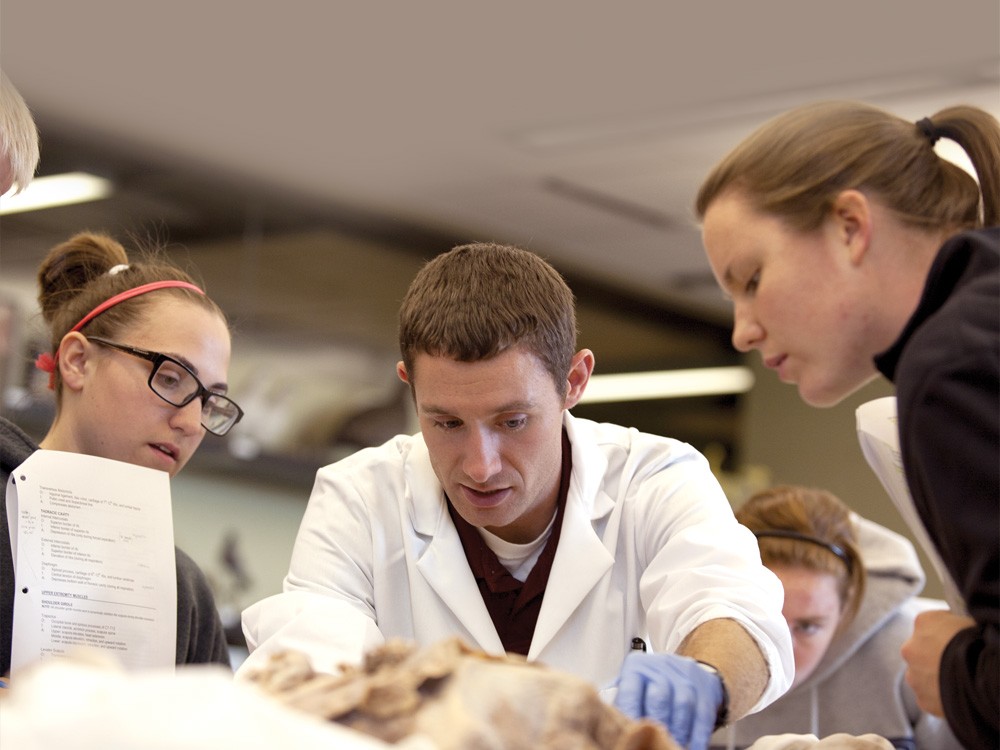 They looked like covered steam tables in a restaurant buffet. But they smelled like formaldehyde. The vents on the lab tables sucked air with a gentle whirring noise, giving the room a negative air pressure.

“It keeps the smells in here and not in the hall,” says Matthew Silvers, an assistant professor at Whitworth University, as he opens the door to one of the school’s newest science facilities. “It just makes it a little bit more pleasant experience.”

Open the tops of the tables, unzip the blue bags, pull back the waterproof wrapping and the formaldehyde-soaked rags, and the source of the stench is revealed. Two human bodies — one male, one female, both elderly.

Welcome to Whitworth’s new cadaver lab, which opened last month and where students in a variety of majors are learning about the human body via dissection of real human bodies.

“It allows us to openly illustrate to students our appreciation for God’s creation,” Silvers says. “I don’t know how you can convey that effect without a cadaver.”

This is a big week for the 130 students in Silvers’ human anatomy and physiology class. They are starting their muscle unit, and Silvers and his 20 teaching assistants have gone into overtime skinning the two cadavers.

“Skinning the cadaver is easy. It’s just slow and steady, that’s the motto,” he says, as he pulls the skin off the male cadaver, which lies on its back, belly up.

The male’s skin was flecked with sparse gray hairs on the outside and pieces of yellow fat on the underside. This was a lean guy, Silvers says, as he looks over the exposed musculature.

What probably did him in can be seen by folding back a piece of skin over the man’s right hip. The silver ball of the man’s hip implant is visible deep beneath crimson tissue, an indication that something with his hip surgery went awry, Silvers says.

You can’t see either of the cadavers’ faces. Silvers makes a point to keep them covered, and he says very few people have actually seen them. Regardless, Silvers and his teaching assistants plan to see deep within the cadavers by dissecting them extensively. (The bodies will then be cremated and returned to their families.)

Beyond that, the cadavers remain nameless. Silvers knows the cadavers’ legal names. But he’s bound not to tell and has discouraged the students from coming up with their own names for them.

“We’re not sure if it’s appropriate to name them or not, so we haven’t,” says Teegan Norton, a teaching assistant. “But I want to.”

The tables are the most intricate contraptions in the room, featuring a ventilator and a grated bottom which channels liquid that spills off the body through a plastic tube and into a bucket below.

Though the tables are sophisticated, the tools are not. In the back of the lab, scalpels, tweezers and blunt picks are spread across a tray.

Silvers reaches into a cabinet and pulls out what he calls a “deli knife,” and then a hacksaw.

“Almost anything you would need, you can get in a hardware store,” Silvers says, though the Stryker Saw, featuring an oscillating blade that he says is great for cutting human bone, might be a little harder to find.

Whitworthians have been eyeing a cadaver lab for a while. They’re fairly common at big universities, but Silvers says Whitworth didn’t have the facilities for one, and remodeling their existing labs would have been cost-prohibitive.

So students in the health sciences and pre-nursing majors had been stuck dissecting cats. Which isn’t quite the same.

“All of our students are going to work with humans,” he says. “They’re not going to be working with cats.”

Rather than launch their own cadaver program in the new building, though, Whitworth turned to Washington State University’s Willed Body program, which receives 15 to 20 donations a year, according to David Conley, director of the program.

Conley outlines the requirements of the program. Even if someone fills out the paperwork to donate their body, he says, they still need to meet certain standards: no obese people (too heavy when embalmed, too hard to dissect), no severe cancers (too much organ damage), no violent deaths (too much damage everywhere).

“For most people, it’s a very humanitarian kind of a thing,” Conley says. “Many of them have had a health care provider in their life, whether it’s a nurse or a doctor, who have given them really excellent care, and want to return the favor.”

Other local schools with cadaver labs include North Idaho College, Spokane Falls Community College and WSU-Spokane, Conley says. For its part, Whitworth pays $2,000 for a four-year lease on a cadaver, Silvers says, though they hope to swap out the bodies every two years.

The problem with keeping a body for too long is that it dries out which leads to desiccation and destruction of tissue, Silvers says.

He has found that the most effective way to keep a body moist has been to water it down with a special blend of embalming fluid, then place the cadaver’s skin back on its body and stick it back in the bags.

“See that hole? That’s lung tissue right there,” says Sara Peterson, a teaching assistant, as she pokes her finger through a hole in the male cadaver’s abdominal muscles. She assures a group of watching students who had packed the lab that they’ll get to the respiratory system later.

They’ll get to the whole body, in fact, but they’re figuring out the order as they go, Silvers says. Take the head, for instance. He hasn’t decided yet if they will cut open the top and remove the brain, or bisect it down the nose with the Stryker.

On the day they learned the muscles, 23 students, five teaching assistants and two cadavers were packed into the lab, orbiting between cadavers and then to other models used for teaching.

Cat Tarvin, an athletic training major, was apprehensive about touching one of the cadavers. It was her first time.

“I like people that are alive, definitely,” she says. So she slipped on one rubber glove and tentatively made her way to the female cadaver.

She ran her hand over the shoulder blade and along the back of her neck. The back of the woman’s shaved head was barely visible under the rag that covered it.

“It was slimy, and she’s cold,” Tarvin remarks afterwards, as she’s headed over to the male cadaver. “She needs a blanket, I think.”