U.S. budget deficit to top $1 trillion for next decade 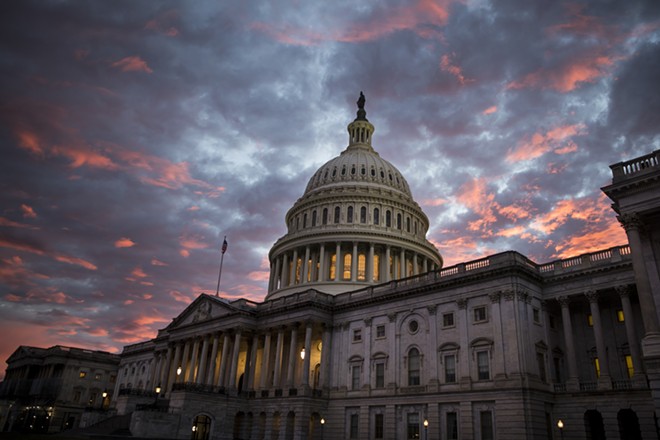 Sarah Silbiger/The New York Times
The Capitol building at sunset in Washington, Nov. 6, 2018. The federal budget deficit continued to rise in the first quarter of fiscal 2019 and is on pace to top $1 trillion for the year, as President Donald Trump’s signature tax cuts continue to reduce corporate tax revenue, data released on Jan. 8, 2019, shows.
By Jim Tankersley
The New York Times Company

WASHINGTON — The Congressional Budget Office predicted on Tuesday that the U.S. deficit will top $1 trillion annually over the next 10 years, ultimately reaching $1.7 trillion in 2030.

The ballooning deficit is being fueled by increased borrowing by the federal government, which continues to spend more money than it takes in. By 2030, the CBO projected, federal debt held by the public will surpass $31 trillion — about 98% of the forecast size of the nation’s economy.

The federal budget deficit already hit $1 trillion last year — the first calendar year since 2012 that the gap between revenue and spending topped the trillion-dollar mark. The CBO’s projections suggested that would become a permanent pattern over the next 10 years.

The somber news was tempered somewhat by the budget office’s expectation that interest rates for the next decade would be substantially lower than what its August forecast indicated, saving the United States hundreds of billions of dollars in interest payments on the federal debt. The budget office now expects the interest paid by 10-year Treasury bills to remain below 3% through 2027.

On Tuesday, hours before the new forecast was issued, President Donald Trump suggested lower rates would allow the United States to “refinance” its debt and begin to pay it off. Trump promised to pay off the national debt as president, but in three years in office, he has instead added to it with big tax cuts and increased federal spending.

The budget office estimates the economy grew more slowly last year than it predicted in August, and sees annual growth declining from 2.2% in 2020 to 1.5% by the middle of the decade. The new forecast anticipates a sharper decline in overall tax receipts through 2029 than did the August projections.

Maya MacGuineas, president of the Committee for a Responsible Federal Budget, said the latest numbers should serve as a wake-up call for policymakers.

“We’re running trillion-dollar deficits while the economy is expanding — when are lawmakers going to wake up?” she said.