Nearly a decade after performances were banned, the controversial Vagina Monologues will be performed at Gonzaga — but you’re not invited. 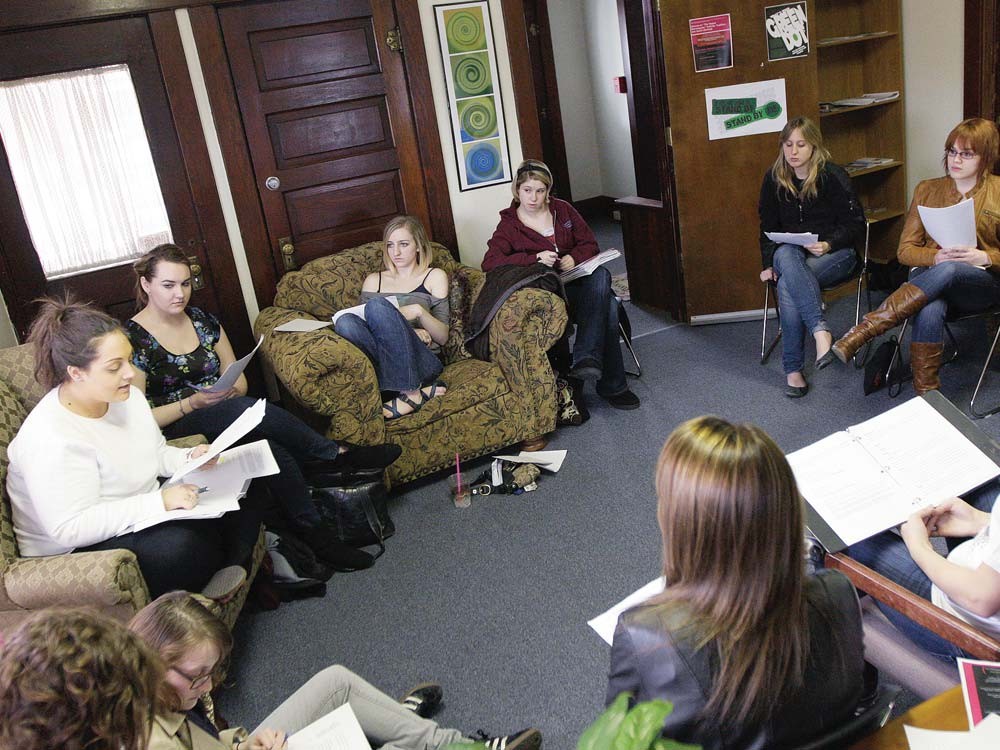 “I’m so moved by you,” student director Diana Mallon says, grinning at her cast. “I’m so excited that together we’re going to make Gonzaga history in eight days.”

The students are running one of the final rehearsals for their upcoming performance of The Vagina Monologues. For the past 10 years, this play has been banned on Gonzaga’s campus.

Krista Benson remembers seeing the performance at Eastern Washington University in 2002. Then a student at Gonzaga, Benson became inspired to bring the production to her school. She hoped it would spark a dialogue about the “epidemic of sexual assault” on the Gonzaga campus. In fact, it sparked nearly a year of controversy that spread city-wide.

“We were encouraged off the record to not talk to the press,” Benson, who now works at EWU, says. But it came out anyway. News of Gonzaga blacklisting the play hit the Spokesman-Review and the Seattle Times. The public roared with both support and condemnation for Monologues. Angry posters and harassing phone calls resulted in a security escort for Benson. She met more than 50 times with the administration, but in the end, President Father Robert Spitzer vetoed the performance, saying it conflicted with the school’s Catholic values.

The Vagina Monologues remains controversial. Call it crass, call it crude, call it refreshingly frank, the play — its monologues spanning rape, abuse, misogyny, lesbianism, profanity, anatomy and sexual fantasies — is intentionally in your face. Catholic colleges across the country have opposed it.

Controversy has its advantages, of course. Benson says she and her fellow students moved the performance off-campus — to a facility paid for by Gonzaga — and the show sold out in less than 15 minutes.

Last year, with Spitzer retired and interim president Thayne McCulloh at the helm, the cycle repeated. A troupe of students, including Mallon, angled to perform the Monologues on campus. Again, they were denied. Again, they protested. Again, the show was held off-campus.

“The protest culture of the spring semester was incredibly empowering,” Mallon says. “It was this sense [that] because we were told we couldn’t talk about that, people started talking about that. We can talk about vaginas, we can talk about sexual violence. People were coming out of the closet like crazy.”

But this year, the story’s different. This weekend, The Vagina Monologues will be performed on Gonzaga’s campus, which raises the question: Why did Gonzaga change its policy?

It didn’t, says Academic Vice-President Patricia Killen. “The policy of the university of not doing a public performance remains in place,” Killen says. Unlike many on-campus events, the general public is not invited to the performance. Student IDs will be checked at the door. The show can’t be advertised off-campus.

The compromise, however, has given critics on both sides ammunition.

Anonymous comments pepper the college newspaper’s website: “The Jesuits have betrayed their Catholic Faith, and God help them for leading our youth into evil!” and “When Satan fails to do his work he sends a woman.”

Mallon says she’s received her first anonymous nasty email, and Catholic news sites have picked up the story, too.

Hearing that the play’s not open to the public, Benson lets out a laugh over the phone. “I’m completely unsurprised,” she says. “That’s exactly the kind of prevaricating crap that keeps them from moving forward.”