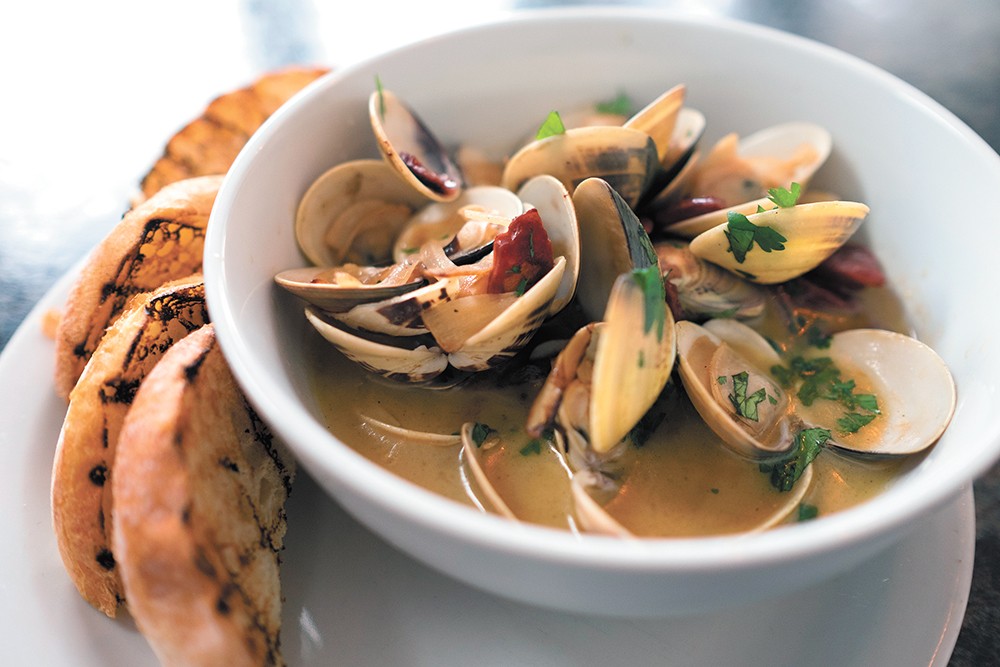 in far southwest Spokane Valley was finally going to see new life as a locally owned restaurant, many nearby residents grew restless with excitement. Each update on Craft & Gather's Facebook page for the past several months has been filled both with compliments on the space's complete overhaul, and questions about its pending opening.

It wasn't surprising, then, that the restaurant's debut week was busy. During peak hours on its first Saturday night in mid-April, any empty tables were quickly filled. Conversation and laughter echoed off the concrete floor and up into the building's rafters throughout the evening.

"We've been busy every night, from the very beginning," co-owner Darrin Sander says. "A lot of people who've come, they walk in and say, 'This is our third or fourth time,' and that is exciting to hear."

Craft & Gather fills a desire for residents of the surrounding south Spokane Valley neighborhoods to have convenient access to what can be described as a casual yet refined gastropub dining experience. There aren't really any other spots in that part of town offering something similar, Sander explains.

"We're kind of isolated out here," he says. "So we're trying to be a neighborhood restaurant that's elevated in quality. There are lots of sports bars around here, and we're still in the price point for the neighborhood."

Sander owns the restaurant with business partner Keith Spragg, who grew up in the area. The owners have several decades combined of experience in the restaurant industry, each having worked in management at national chains and award-winning single-location eateries. Spragg and Sander met and became friends while working together in San Francisco.

"We wanted to do a restaurant together, but it was just too expensive down there," Sander says. "Keith was up here visiting family last summer and ran across this place... We came up in September of last year to take a look and started December 1st on renovations."

The duo recruited Chef Steve Jensen, a Lewiston, Idaho, native who trained at Le Cordon Bleu and formerly honed his skills in the local kitchens of Bistro on Spruce in Coeur d'Alene, along with Luna, Ambrosia Bistro and Waddell's Pub and Grill in Spokane.

In addition to a few classic pub burgers and other handheld items, including a lamb burger ($15), grilled cheese ($10) and a fried chicken sandwich ($13), Jensen's menu also features several plated entrées: hand-carved ribeye ($26), king salmon ($23), and kurobuta pork ($21). Craft & Gather's shareables starters include deviled eggs ($6), steamed clams ($11) and white cheddar polenta fries ($8), along with some salads ($8-$9). Many items on the menu are gluten-free, or can be prepared that way.

Twelve tap handles in the bar offer a rotation of local and regional brews. Beverage options include a small but growing wine list, joined by a seasonal craft cocktail menu and coffee from Spokane's Roast House. Happy hour runs daily from 3-5 pm.

Sander says Craft & Gather will adapt and change its food and drink offerings in accordance with customers' requests, and to highlight seasonally available, local ingredients. Eventually, his goal is to have an on-site chef's greenhouse.

In the coming weeks, seating will expand onto a spacious patio overlooking the former golf course grounds, which are bordered by a small creek.

"Keith and Steve and I are always looking to change and create things," Sander continues. "We'll never just have one set menu; we're trying to push things to the next level." ♦

A handful of new restaurants, bars and tasting rooms on the way, or open now