As the school year begins, officials encourage families to vaccinate their kids. But there are families who don't want to, or don't have to 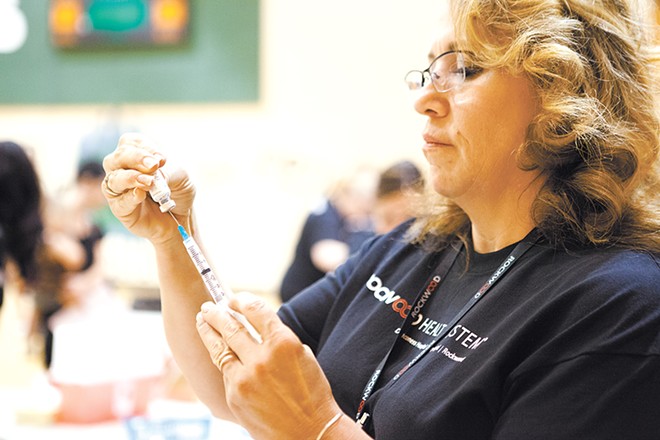 kids and their families from all over the county sit patiently in fold-up chairs in the school's gym as they wait to receive immunizations from diseases such as diphtheria, tetanus, measles and whooping cough. After getting their shot, students get a sparkly Band-Aid, a Dum Dum lollipop and the assurance that they can attend their first day of school.

In Washington, as well as Idaho, students have to be up to date on their required immunizations or risk being excluded from the classroom. To that end, school districts in Spokane County have been stricter in applying this requirement in recent years.

"We certainly have been more proactive," says Heather Graham, school nurse at Greenacres. "[Immunizations] keep kids healthy, and when they are healthy, they are in school."

Between the 2013-14 and 2015-16 school years, the percentage of students in Spokane County who were out of compliance with state requirements dropped from a high of 19 percent to about 5 percent.

Although some progress has been made, neither state has hit its goal of getting 90 percent of students immunized, a percentage that research shows will help prevent an outbreak of numerous diseases. In both states, sidestepping vaccination requirements is relatively easy. Parents need to fill out a form and turn it into the district citing a medical, religious, philosophical or personal reason why they object to their child being vaccinated.

Both states have higher rates of families exempting themselves from vaccination requirements than the national rate of 1.7 percent. In Idaho and Washington, unimmunized students are often clustered in remote areas or in private schools with other vaccine-wary parents.

"If you look at New England or the South, they have fairly good rates," says Paul Throne, health promotion manager for the Washington State Department of Health. "It's just the culture of those parts of the country. Out west, we tend to have an I'll-think-about-it approach." 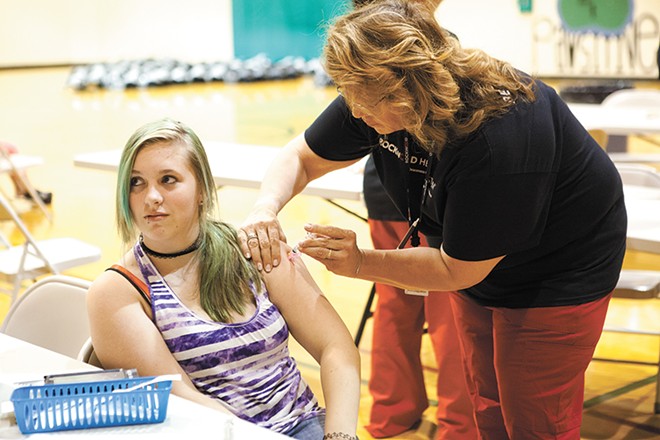 Kristen Black
A student feels a pinch as she receives a vaccination at a clinic intended to get kids up to date on their immunization before school starts.

The letters have gone out.

The robocalls have been made. Now, it's time for students to get their shots, get an exemption or be excluded from school.

Kevin Morrison, Spokane Public Schools spokesman, says that in recent years the district began making a deliberate effort to contact the families of students who are out of compliance with immunization requirements. Last year, the district drew attention when it began excluding students who couldn't prove they had the required shots or had received an exemption.

"I really want to give out a shout-out to Spokane," says Throne, who credits the district's move with improving the state's overall compliance numbers and getting more kids vaccinated. "They have been amazing on getting a handle on out-of-compliance kids."

Across the state line, Coeur d'Alene Public Schools has taken a different approach to encouraging families to come into compliance, says Cindy Perry, school health services coordinator for the district.

Perry says that if families don't understand immunization requirements or are too busy to take their kids to a clinic, they'll just fill out an exemption form.

"There is a problem with that," she says. "Just filling out an exemption form doesn't mean that we've improved the health of the community."

Instead of driving families to seek exemptions, she says the district focuses on educating families on the importance of immunization and what resources are available.

the percentage of exempt students has risen from 6.6 percent to 7 percent in the past three years. However, it's still lower than 12.3 percent of students in Kootenai County who have exemptions.

In Spokane County, nearly 90 percent of students have all of their immunizations. However, there are a few pockets where that's not the case. According to state data, the schools with the highest percentage of students exempt from immunization are religious or alternative schools. At St. Michael's Academy, a private Catholic school that refused to comment for this story, 54 percent of its 127 students are exempt. At Slavic Christian Academy, 42 percent of its 463 students are exempt, the second highest in Spokane County.

Elena Solodyankin, administrator of Slavic Christian Academy, stressed that the school is in compliance with state requirements.

"We inform our parents about immunization as required," she says.

Alexandra Hayes, immunization outreach coordinator for the Spokane Regional Health District, says that clusters of unimmunized students could be a problem if there is an outbreak of a highly contagious disease, such as an outbreak of measles that occurred in 2014 in California.

"If you have all these unprotected individuals, then the potential for the spread of disease is much higher," she says.

the percentage of "adequately immunized" students to 86.7 percent, up from 85.6 percent a year earlier, the state has the highest percentage of exemptions in the country at 6.5 percent. In North Idaho, that number is even higher: Bonner and Boundary counties have exemption rates of 17 and 14 percents, respectively, few of which are for religious reasons.

CdA Public Schools' Perry says that the issue comes down to people who have free choice and have the option to not immunize their kids.

"The people who have a really deep belief system are the ones who sign the exemptions," she says. "They would love to give me information about why it's not good to be immunized." ♦