We can be pro-development and anti-sprawl, and David Condon knows it

On Monday, Mayor David Condon vetoed the Spokane City Council's attempt to locally plug a big loophole in state growth management law. As is, the loophole allows developers to start building on newly designated urban land while growth management authorities decide if the expansion itself is even legal. But here's the kicker: Even if it's deemed illegal, the developers who have begun building get to keep building because they're "vested."

Opinions on both sides are dug in: Critics of vesting say it isn't the sort of growth we need. The county commissioners say they're just taking some of the risk out of a very risky endeavor.

In this case, though, we don't really need opinions. The facts are clear.

Spokane County's own land quantity analysis tells us that we can develop full-bore for nearly a generation — 18 years! — without expanding our urban growth area. The report, published in 2010 and amended in 2011, says your newborn will graduate high school before we come close to running out of residential land. It gets better: In that same time period, we'll only use about 66 percent of the available commercial land and less than a third of undeveloped industrial land.

Our UGA is already a McMansion. Why are we adding rooms?

If you're tempted to respond "because of freedom," think about the cost of that freedom. When there's so much open space within the growth area, placing a bunch of yawning exurbs in the alfalfa fields of north Spokane County isn't just about catering to the market preferences of the urban outdoorsman. There are real, monetary impacts for all of us.

The more water and sewer lines we run, the more we have to maintain. And if those new lines are servicing lower-density areas far from existing infrastructure, then all of our utility bills go up.

But I don't need to tell the mayor this.

He said much of this himself in a letter to the county commissioners almost exactly a year ago. Along with his usual adversaries, Ben Stuckart, Jon Snyder and Amber Waldref, Condon wrote that when low-density areas are developed on the edge of towns, "existing and new taxpayers are burdened by the costs of extending and maintaining extra miles of roads, utility lines, pipes, pump stations and general urban services."

On Monday, Condon changed his tune.

The mayor loves talking about making Spokane a city of choice. But being a city of choice requires making choices. If we want to attract the sort of smart, well-paid urban dweller (and his or her hip-as-hell startup) who we're so fond of targeting, we need to start at the core and work our way out.

We can make a choice, without discouraging development, to encourage it where we need it most. In areas that will deepen the tax base and relieve some financial pressure from vital services. There are amazing development opportunities within the UGA.

Consider Greenstone's Kendall Yards project: It's growing at staggering speed, providing homes for people across the age and wage spectrum while turning a brownfield into a New Urban oasis faster than anyone thought possible.

It wouldn't be fair to expect every developer to have that kind of vision, but that's where smart land management comes in.

It helps show people where to look. ♦

Luke Baumgarten, a creative strategist at Seven2 and former culture editor of the Inlander, is a co-founder of Terrain and the founder of Fellow Coworking. He tweets @lukebaumgarten

Dream deferred: What do we do when life isn't all we thought it would be? 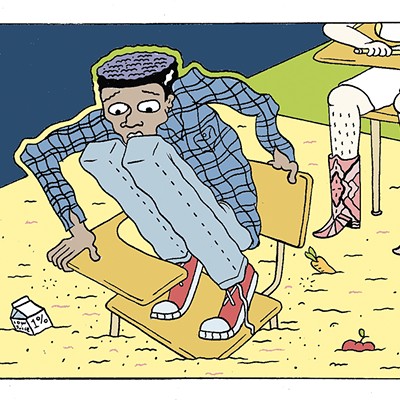