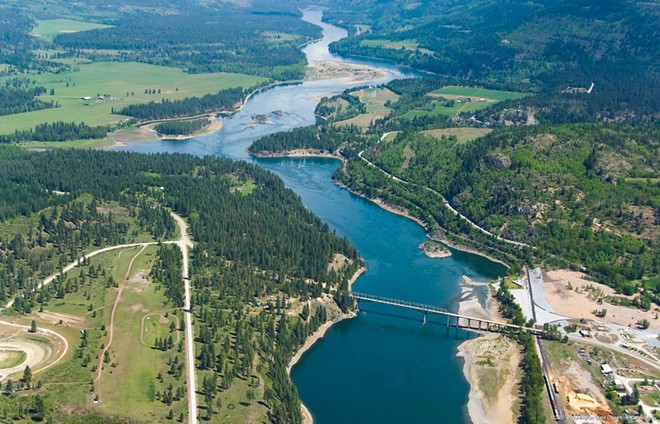 Department of Ecology photo
The town of Northport on the Columbia River is near the Canadian border and has been contaminated by toxic releases from the Teck Metals smelter in Trail, British Columbia, according to Ecology.

A Canadian mining and smelting company will have to pay the Confederated Colville Tribes more than $8.5 million after the U.S. Supreme Court declined to hear the company's appeal of a Ninth Circuit Court of Appeals ruling early last week.

Teck Metals, a Canadian mining company with a large lead and zinc smelter on the Columbia River just a few miles north of the border, dumped millions of tons of toxic waste into the river over a century.

In one of several lawsuits, the Colville Tribes and Washington state sued to hold the company liable for pollution along the Upper Columbia River under the Comprehensive Environmental Response, Compensation and Liability Act (CERCLA). The $8.5 million would recover the tribes' costs to litigate that question.

The overall cleanup plan for pollution from the operation is still being worked on, with Teck's American company already paying more than $90 million for a remedial investigation and feasibility study, according to court documents.

But the company wanted the Supreme Court to take up the question of whether American courts hold jurisdiction over a foreign company's pollution liability, especially considering that the company voluntarily had been cooperating with some of the cleanup efforts.

"Foreign firms like Teck will have little future incentive to cooperate with the United States if
states, tribes, or individuals can pile on with separate CERCLA suits," the company's petition asking the Supreme Court to take up the case argued.

The petition also warned that other countries could retaliate, holding American companies and other polluters around the world responsible in court instead of through cooperative agreements.

But the Supreme Court opted not to hear the case on June 10, meaning the Ninth Circuit ruling stands, and the company is liable for its U.S. pollution.

The move was celebrated by the Washington state Department of Ecology on Friday, June 14.

"This is great news for the tribes and Washington state," said Jim Pendowski, program manager for Ecology’s Toxics Cleanup Program, in a news release. "Teck Metals disposed of millions of tons of wastes into the Upper Columbia River. It’s time that the company is held accountable. This decision will ensure that will happen."


"The litigation began back in 2004 after the company refused to abide by a U.S. Environmental Protection Agency order requiring Teck to assess the pollution and identify cleanup options. Teck argued that the EPA didn’t have jurisdiction over a Canadian company. Individual members of the Colville Tribes sued with Washington State as co-litigants. The Colville Tribes later joined the litigation.

The case affirms that U.S. federal environmental law applies to a Canadian company when it disposes of hazardous substances in the United States. Teck had claimed that U.S. courts lack jurisdiction over the company, but the Ninth Circuit found it "inconceivable" that Teck didn’t know its toxic waste was aimed at Washington when it discharged it directly to the Columbia River a few miles upstream from the U.S.

'This is a great example of what can be accomplished when two sovereigns — the Colville Tribes and the state of Washington — join forces to protect the environment and hold polluters accountable,' said Rodney Cawston, chairman of the Colville Business Council.

The state and tribes look forward to cleanup and restoration of the upper Columbia River. Currently, the EPA is overseeing Teck’s investigation of Upper Columbia River contamination. In addition, the state, the tribes, the Department of Interior, and the Spokane Tribe of Indians are working to recover natural resource damages resulting from Teck’s contamination of the river."