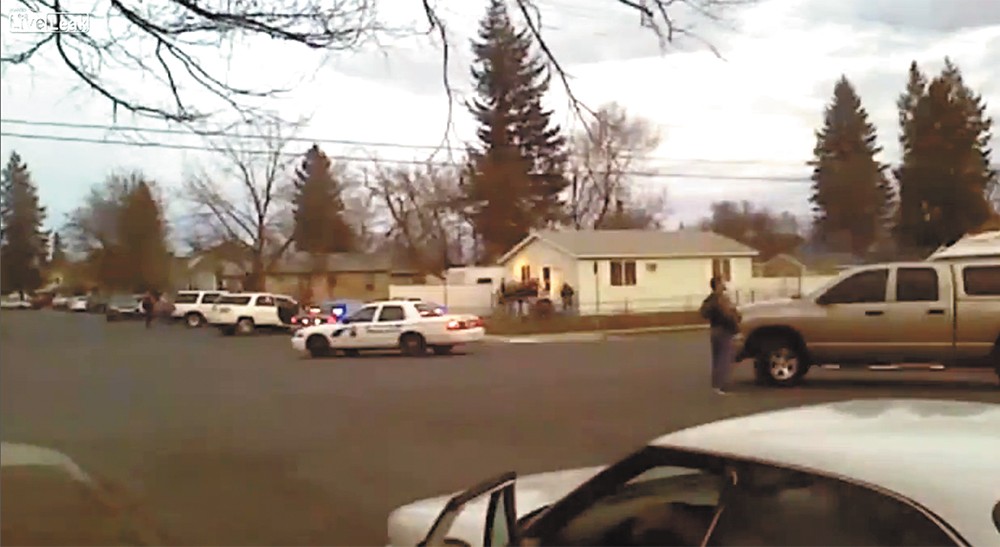 Stephen C. Corkery takes about two steps out his front door, arms swinging lightly at his sides with what appears to be a gun in one hand, when five Spokane Police officers fire off at least 14 shots. Amid the echoing volley of gunfire, Corkery crumples to the lawn before the front door even has time to close.

"Why would you shoot him?" someone asks from off screen in witness video of the shooting.

Many new details have emerged in the days since Spokane officers fatally shot Corkery on March 26, which may be largely due to that bystander's cellphone video of Corkery's final moments — footage that contradicted aspects of the initial police accounts and likely contributed to SPD officials issuing on Monday a clarified statement regarding what happened.

"Through the course of an investigation," the clarification states, "as new information is made available and additional witnesses are interviewed, it is the commitment of SPD to clarify information originally presented, if and when a clarification is necessary."

Investigators say detectives had linked the 30-year-old Corkery to a string of recent robberies and tracked him to a home along West Grace Street. As officers surrounded the small house shortly after 6:30 pm, Corkery reportedly came to the doorway and spent about 10 minutes speaking with negotiators through a screen door. He then stepped out.

While initial police reports suggested officers continued to negotiate with Corkery after he stepped out onto the front porch, the witness video shows multiple officers opening fire less than two seconds after Corkery emerges from the home. Officers can be heard quickly shouting "Drop it!" or "Don't do it!" before being drowned out by gunfire.

"The suspect refused to comply with the officers directives to drop the gun," the clarified account states. "Officers believed the individual posed a threat to the safety of the community and to the safety of other officers and subsequently fired their weapons."

Search warrant records indicate Corkery was armed with a black, CO2-propelled pellet gun. WSP investigators confirm the pellet gun was the only weapon recovered from the home.

Following subsequent investigation, detectives report they have found additional evidence linking Corkery to robberies at a North Monroe Baskin-Robbins and a tanning salon. Investigators say Corkery had previously written out letters claiming responsibility for the crimes and apologizing to his family. A friend turned those notes over to detectives.

The Spokane Police Department has not yet released the names of the officers involved in the shooting. Detectives with the multi-agency Spokane Investigative Regional Response Team have taken over the shooting investigation under the lead of the WSP.

With the latest shooting, SIRR investigators have now responded to four officer-involved shootings in the Spokane area in the past three months. In addition to Corkery, Spokane County Sheriff's deputies also fatally shot 23-year-old Jedadiah Zillmer on Feb. 11. Two other non-fatal shootings occurred in January and early March.

The SIRR team was also recently called to Stevens County where they will investigate a detective's fatal shooting of an armed suspect on March 25. All five shooting investigations remain open. ♦