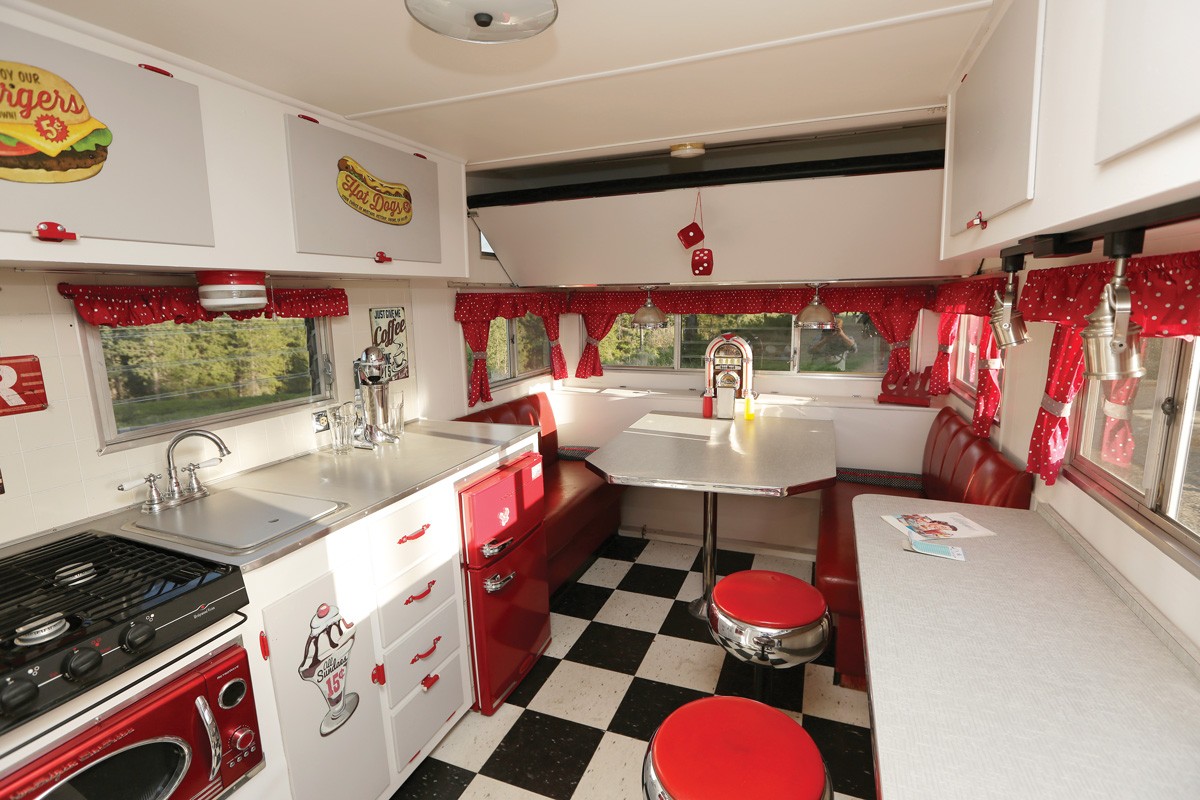 Young Kwak photo
This Aloha camper, now nicknamed "Dinah," was manufactured by a Beaverton, Oregon company in the 1960s and restored by Doug and Teresa Johnson at their Mead workshop.

here's plenty to like about trailer camping, from pop-ups to pull-behinds, the latter being the perfect synthesis of creature comforts and outdoor-readiness. Warm, safe and dry? Check. Plenty of storage, the basics for cooking and hygiene? Check. A comfortable bed (and the least likelihood of sharing your pillow with spiders or ants)? Double check.

While a new camper can fulfill those requirements, for Doug and Teresa Johnson, the fun of restoring a vintage trailer together was the initial appeal. Since acquiring and restoring a '68 Kit trailer they named Baby several years ago, they've gone on to restore numerous models. Currently,they're working on a rare 1962 Aloha extra-wide, originally used for temporary housing at the '62 Seattle World's Fair.

They've turned their experience into a word-of-mouth side business in Mead called Retro Rides & Custom Transport. Doug is self-taught (with some coaching early on from other restoration experts, like local Dovetail Woodworks' Scooter McGregor) and now finds enjoyment in doing the plumbing and electrical; Teresa does some demolition and contributes design ideas, while painting, welding and upholstery work get subbed out. "Trailers now find me," says Doug, who wanted to be an architect in his early years.

Young Kwak photo
Sonya York (left) has restored several campers on her own, but for this little 1964 Bell, she teamed up with her daughter Brandi.

comfy sleeping spot is what renewed Sonya York's interest in trailer camping after several years doing so when her two children were small.

The kids were grown when she acquired and restored a '64 Serro Scotty for herself, giving it a red and white kayak theme. Next up was a '64 Aristocrat she restored for her son in a lodge theme. And then, like Doug Johnson, this past year yet another trailer found her. Someone gave her '64 Bell, asking only in return that York share photos of the finished camper. She collaborated with her daughter on the restoration.

York describes coming home from work one day last year to discover Brandi had removed, repainted and reinstalled both the refrigerator and stove.

"This is the biggest gift," says York, who is thrilled to share not only a love of camping and the outdoors with her kids, but also the knowledge and satisfaction that they are now resourceful and confident enough to tackle big projects.

The camaraderie of camper restoration is in fact one of the benefits. "Everybody we've done one for becomes acquaintances," says Doug Johnson, "and the greater majority have become friends."

Young Kwak photo
For Les and Valerie Watson, locating and helping with the restoration of their 1962 Aloha Seattle World's Fair model fulfilled a longtime dream.

hat includes Les and Valerie Watson, who have owned not one but two of the rare '62 Aloha World's Fair models — only 200 were made and only five are known to have been restored, says Valerie.

Although they wanted a World's Fair model, none was available at the time, so they purchased a modest, 14-foot 1964 Cardinal and rebuilt it themselves. Next was an 18-foot 1960 Holiday House, which is actually modeled after the World's Fair style, distinct for its curved corner windows.

But it wasn't the 1962 Aloha, and the Watsons' interest in a bona fide World's Fair model hadn't waned, so when Johnson found one, the couple was ecstatic.

Johnson restored the '62 Aloha 16-footer, adding custom touches like a hydraulic lift under one of the beds for easy-access storage and the backlit light fixture featuring the Seattle Space Needle.

While Johnson did the "heavy lifting," says Valerie, she handled some of the custom interior touches, including themed curtains and linens. They dubbed her Blue Jewel. 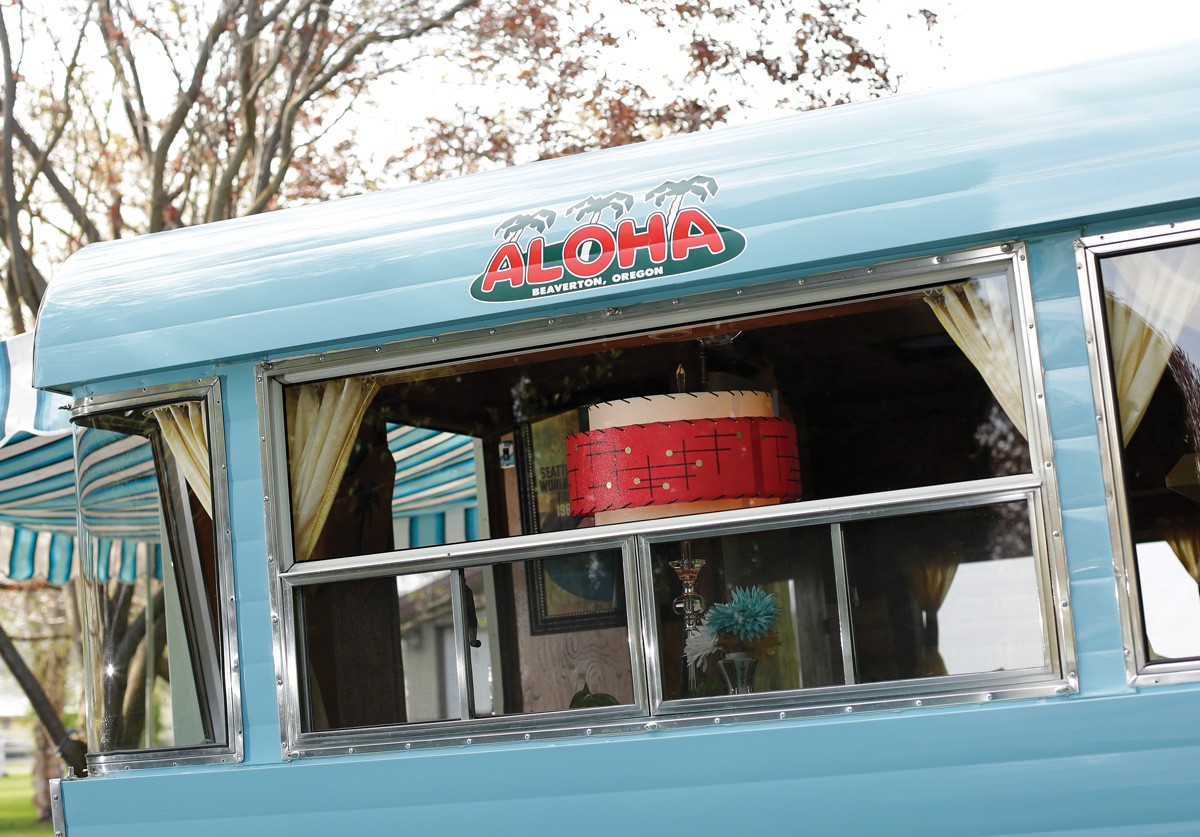 Young Kwak photo
Les and Valerie Watson enjoy taking their restored 1962 World's Fair camper to events with other vintage trailer enthusiasts. "It's all about the people, it's all about the crowd," says Valerie.

Their second Aloha '62 World's Fair trailer is a roomier 22-footer and presents them with a decision about whether or not to sell one of the Alohas.

For North Idaho's Mig Jumel Whitt, campers serve numerous functions, including a way to center oneself. She fondly remembers growing up camping and backpacking with her father. Whitt still has the 1971 Shasta she bought and restored 12 years ago. Although it's just one of several she owns and has restored, it's the only one she hasn't made over from the first theme she created for it: island girl, a nod to her upbringing in San Diego amid surf and sand.

In addition to serving as a backdrop for her artistic urges, Whitt's campers are a model for an adventurous lifestyle.

"I don't let anything stop me," says Whitt, who camps year-round, sometimes alone, and upward of 40 weekends a year. Camping is about a "community of people who are such a huge support group no matter what's going on in your life," she says. "I really think in this day and age — we're connected to everything — you have to unplug."

Like anything vintage, but especially a camper (or vehicle) that has also been exposed to the double-whammy of weather and speed-related stress, you might want to consider something new that just looks old.


Tacoma's Relic Trailers (above) is one of a handful of companies that use fiberglass bodies in a "retro" style, but with all new materials inside.

The company, founded by Jayne Barocela, is the happy accident that comes when you pair a motivated vintage camper enthusiast with a '60s-era inventor who created the original design but let it languish in a warehouse until Barocela discovered it and started Relic Trailers.

Whichever way your trailer quest takes you, remember that educating yourself beforehand is one of the best ways to minimize the bumps in the road you're likely to encounter along the way.

Camping is stressful, dirty and a lot of work to have 'fun.' Which is why I don’t really like it