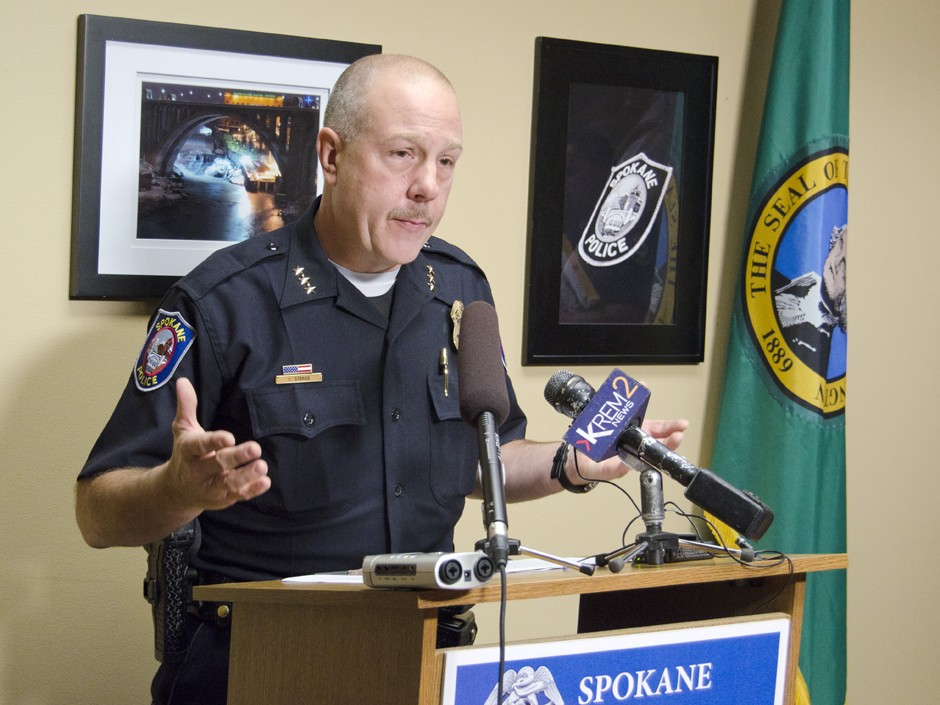 Jacob Jones
Police Chief Frank Straub: "It's inappropriate for people to try to spin racial overtones into something that had nothing to do with race."

When Spokane Police Chief Frank Straub stepped to the podium, he emphasized a few select words for the national pundits, columnists and bloggers beyond the walls of that room.

“I would like to make it very clear,” Straub says, “the motive for this attack was robbery. Race was not a factor.”

In the week since local World War II veteran Delbert Belton was killed, Spokane has rallied around his family and his memory. Authorities have arrested two teenagers suspected in his death and charges have been filed for murder and robbery.

But many racially charged social media comments and sensational online news sites have projected racial frustrations onto the two black teens suspected in the attack, propelling local grief into national outrage and distorting details to drum up public indignation.

In response, Straub argues the focus of this tragedy should remain on the loss of a distinguished veteran and what society can do to prevent troubled young people from turning violent. This is about justice and mourning, he says, not scoring cheap political points.

“It’s inappropriate for people to try to spin racial overtones into something that had nothing to do with race,” Straub says, adding, “We have to be careful we don’t take an incident and make it something other than what it was.”

Emergency responders found Belton, an 88-year-old survivor of the Battle of Okinawa, badly beaten and bleeding in the backseat of his car last Wednesday evening outside an Eagles Lodge in North Spokane. Robbed of his wallet and left for dead, Belton later succumbed to his injuries at the hospital.

Piecing together surveillance videos and witness reports, investigators soon narrowed in on two teenage suspects caught on multiple security cameras in the vicinity. Local media put out photos and descriptions as authorities launched an intense citywide manhunt. Within 24 hours, national cable news stations had picked up the story.

Led by The Drudge Report, conservative news sites and commenters quickly latched onto the race of the teenage suspects and cast Belton as a victim of “black-on-white” violence. Many commenters have compared the attack on Belton to a racially inversed Trayvon Martin shooting or the unprovoked killing last week of Australian college student Christopher Lane in Oklahoma.

Straub argues such conservative blogs and news sites appear to be taking advantage of Belton’s death to perpetuate personal and political agendas.

In recent days, additional reports also have accused Straub of “blaming the victim” after the chief implied Belton may have escalated the confrontation by fighting back against his attackers. Online reports from across the country have again simplified his comments to inflame outrage.

Straub says some reports took his comment out of context, distorting the answer he was giving regarding a specific question on the severity of Belton’s injuries. Straub maintains he feels Belton’s actions were justified and appropriate.

“Let’s try not to put something in there that doesn’t belong,” he says. “We have an obligation to report things accurately and to report them for what they are, and not try to use the death of a distinguished veteran to anybody’s advantage. If there’s an advantage here ... it needs to go to Mr. Belton’s family. We as a community need to wrap our arms around them and support them through this time of grief.”

Reporters and TV crews again crowded shoulder to shoulder Monday afternoon as one of the suspects, Demetrius Glenn, made his first appearance in court. The second suspect, Kenan Adams-Kinard, made his appearance Tuesday. Both face charges of first-degree murder and first-degree robbery.

Straub says he believes this tragedy should mark the beginning of a serious community discussion on how we engage troubled young people. He says the country has a “lost generation” that has been overlooked and left to its own devices. He says city officials, church leaders, families and schools can provide better support for teenagers headed in the wrong direction.

Regardless of race, Straub says Spokane and the country at large have an obligation to turn young people away from lives of crime and violence.

“We brought the individuals to justice, but how do we prevent another senseless crime like this from happening again?” Straub asks. “Those are the issues that we have to go forward and address. If we don’t address them, then Mr. Belton’s death becomes even more senseless than it already is.”