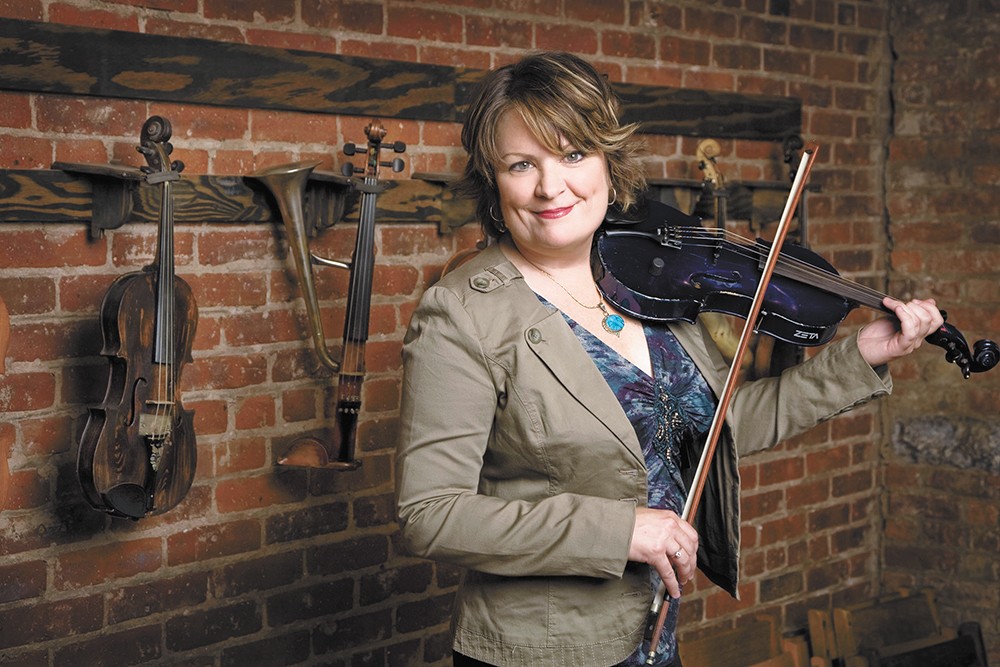 As one of the world's most prominent fiddlers, Eileen Ivers is often asked to explain what separates her instrument from a violin. She has an anecdote at the ready.

"We did an outreach years ago down in Clemson, South Carolina. And a 10- or 11-year-old girl raised her hand and said, 'Miss Ivers, Miss Ivers! Do you know the difference between a violin and a fiddle? Well, a violin has strings, but a fiddle has strangs,'" Ivers says, shedding her Bronx accent to affect a Southern drawl.

And yet, as Ivers is also wont to note, famed classical violinist Itzhak Perlman has been known to refer to his violin as a fiddle.

"I like to go back and forth," she says. "The upshot is that the instruments are really the same, and even musically they're interchangeable."

One piece that showcases their interchangeability is "Pachelbel's Frolics," an extended riff on Pachelbel's familiar Canon. "Frolics" is a crossover crowd-pleaser, which is why Ivers frequently incorporates it into orchestral concerts like the one she's performing with the Spokane Symphony Saturday.

"The concertmaster usually joins me downstage, and we get into this wonderful classical fiddling thing, where the piece starts as the Canon and progresses ... to an Irish reel at the end. So it really blurs the lines."

Along with featuring longtime audience favorites like "Frolics," the concert will incorporate some new material. Ivers is less than a week away from officially releasing Scatter the Light, her first LP since 2016's Beyond the Bog Road, and she's worked a few of its songs into her setlist.

"We've just added a few new arrangements, and we'll be playing the latest one, which we've only played with one other symphony. It's a new song called 'Shine.' ... We had an arranger do a beautiful job with the orchestral palette to really enhance the emotion of the song," she says.

"It speaks to the passage of time and it being so fragile and fleeting. The underpinning message is just to make the most of the time we have, to be good, do good, and really be grateful for what we have."

The set will also draw from previous records as well as Riverdance, the blockbuster Irish dance show that Ivers began touring with in the mid-1990s.

For these symphony concerts, Ivers travels with her full band except for upright bassist Lindsey Horner. That means guitarist Matthew Mancuso, percussionist Dave Barckow and keyboardist Martin "Buddy" Connolly will join her on stage, along with local Irish dancers from the Haran School.

"It's a show that's really full of, obviously, lots of instrumental pieces but also songs. It touches everything from 17th century [Turlough] O'Carolan, who was a blind harpist in Ireland, through to original tunes written by myself. So it's a really nice survey of Irish music and roots music through the years."

Much like Beyond the Bog Road, an album on which Ivers sought to highlight the enduring influence of traditional Celtic music on distinctly American genres like bluegrass and country, the concert quietly doubles as an educational experience.

"During the show, I love to talk about the relationship between Celtic music and one of the things that came from its roots, that being Americana music."

Ivers says the unique thing about the full-orchestra concerts is that it accentuates certain "emotive lines" in the music to create a grander, richer musical experience.

"It's always a different kind of performance when you have this incredible orchestra sharing the stage, sharing the music with you. I mean, even just a lone oboe line can get the hair on the back of your neck standing up," she says.

But there are also times when the orchestra has to fade into the background and let the spotlight fall on a single instrumentalist.

"For me and our band, it's important that sometimes the orchestra remains tacit within a certain section or two of different pieces, because part of our music and Irish music is improvisation. You want to have that freedom to have an open-ended improv or really take the solo out a little bit," she says. "I love those moments because that's very real. It's very much a part of who we are and what the tradition dictates. And then, of course, when the orchestra comes back in, it uplifts it even more." ♦