At The City Gate, Douglas Ceniza waits for morning coffee and a chance to rebuild his life 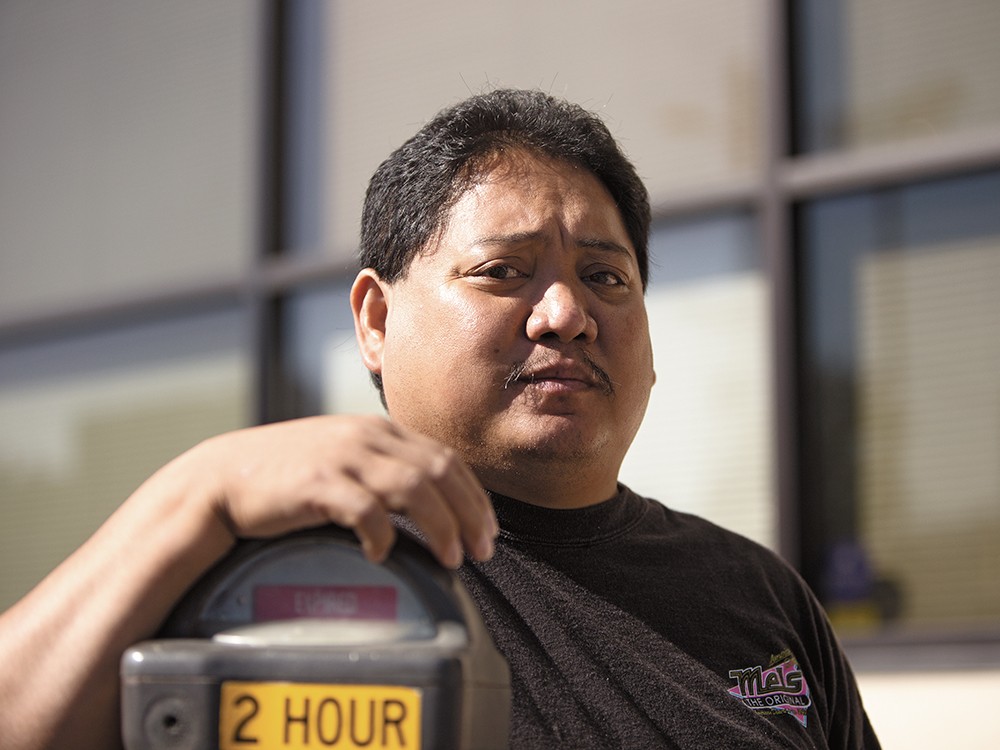 It’s 10 ’til 10. A tall, thin man in maroon track shorts, running shoes and a matching tank top is first in line. An old woman wearing a headscarf and using a walker shuffles down the sidewalk a block behind. In front of the used car lot across the street from The City Gate, where dozens of people are waiting for a free breakfast, shirtless men smoke and sweat in the sun. Under the concrete bridge crossing Madison Avenue, a man and a woman clutch each other beneath a blanket.

There are people with bikes, backpacks and babies in their bellies. There’s a man holding a staff. People who come every day for a doughnut and coffee, a bag of bread and some fruit. People don’t talk much.

At 9:57 am, a man inside The City Gate removes the whiteboard blocking the entrance. (It says, in big, capital letters: “DO NOT”.) Douglas Ceniza leans against a baby-blue pickup as people bleed into the building. He’s 45, stout and soft-spoken with a sparse salt-and-pepper mustache. He wheezes when he laughs. And he laughs a lot.

Ceniza doesn’t know how he ended up here, living in low-income housing on the top floor of The City Gate’s Alberta House in a comfortable but small room, with no money, no job and a rotation of medications to suppress his hallucinations, calm his nerves and keep his nightmares at bay. But it started in 2001, after Sept. 11. An immigrant from the Philippines, he moved to Spokane and soon got work as a baggage handler for United Airlines. But after those planes crashed into the Twin Towers, he was laid off. He couldn’t get a job at the other airlines, UPS or other mail carriers. He took a 50 percent pay cut to work as a janitor with no benefits. His mother died in San Francisco. His family didn’t tell him about the funeral.

“Suddenly,” he says, “everything just disappeared.”

He starting seeing things that weren’t there. In his dreams, people chased him and screamed his name. He was admitted into Eastern State Hospital, and in and out of various psych wards. His family was scared. His wife couldn’t take it any longer. This year, for the first time in his life, he lived in a homeless shelter.

Ceniza keeps himself busy. He goes to church a few times a week. Most days, he goes to the downtown library. He’ll read anything. He just finished Stephen King’s Under the Dome, about a small town trapped inexplicably, inescapably. But today, he’s got plans to go back-to-school shopping with his boy. Tomorrow is his son’s first day back at Rogers High School, where he’s a computer whiz and Junior ROTC star. Ceniza is so proud.

In the meantime, he waits — for a call from his lawyer about his SSI benefits, for a new apartment and a bigger room, for a cup of coffee. Mostly, he’s waiting to “get the old Douglas” back.