Artists make their mark — literally — on the Jundt Gallery. 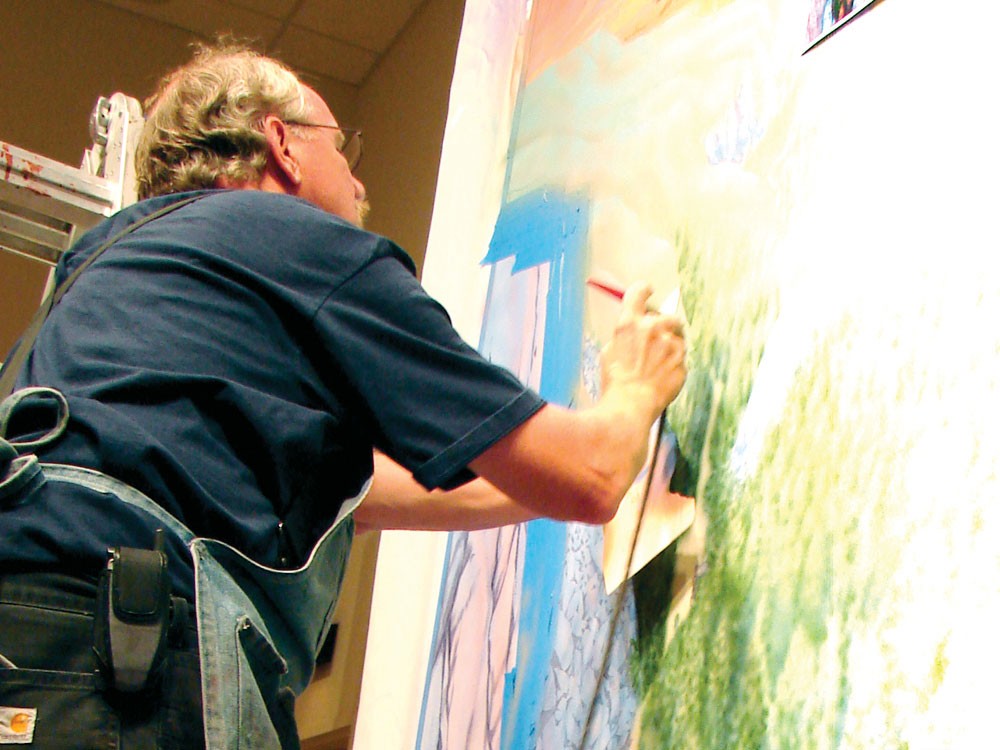 Carrie Scozzaro photo
Ken Spiering at work at the Jundt

Inside Gonzaga’s Jundt Gallery, everything’s subdued. The artists have less than a week to complete their installations on the nearly 12-by-8-foot walls for Drawn to the Wall IV. Conversation is hushed but amiable, with impromptu critiques, affirmations and mutual respect. Occasionally you can hear the scratching and scrubbing sound of pencils or paintbrushes.

And then Ken Spiering fires up his air compressor, punctuating the silence with a persistent rattling and the occasional shhhh-shhhhh of the airbrush. Spiering — a venerated artist who works in everything from large-scale sculpture (Riverfront’s Radio Flyer) to illustration — recently left North Idaho College to return to teaching public school in Freeman, Wash. His vertical landscape began as numerous images composited in the computer and scaled up. Color pencil will be overlaid on top of the paint for a surreal effect.

“I like the immediacy of drawing,” says Spiering, who was excited by the project when he was first invited by Jundt Director J. Scott Patnode in January.

Inspired by American modernist Jim Dine’s 1994 spontaneous drawing exhibition (a video of which will be shown Saturdays at 2 pm), Patnode created the format for Drawn to the Wall in 2001. Minor stipulations: Work must not protrude more than two feet and only include materials that can be painted over.

For Gordon Wilson, that’s less a challenge than the texture of the wall. Wilson, a Whitworth instructor, began planning in January, drawing his Pieta-like image to scale in pieces, arriving at the Jundt prepared to put them directly on the wall.

He steps back, tilts his head, then seats himself across the gallery to contemplate the figurative scene he has re-created directly onto the wall, one of many small adjustments from his original plan.

We talk about the relation of the viewer to the “page”: visible drawing marks like little bolts of energy versus the coalescing of marks into the mass of an arm or face when viewed from a distance. There’s magic in that dynamic shift.

Nearby, Carolyn Stephens is down from the ladder, paintbrush in hand, blocking in the faux rockwork that anchors her layered illustration. Unlike Wilson, Stephens’ approach has been more adaptive and organic, growing on-site from a variety of sketches and pulling together varied interests including natural history. An instructor at Spokane Falls, Stephens has created a “secret garden” effect on her wall, hinting at the delicate balance between artists’ private studio processes and public display of work.

Awaiting installation are Louise Kodis’ constructions of fabric, glass and wire. Kodis worked from home for most of the exhibition. Accustomed to working large, including a public piece at the Spokane airport, she nonetheless liked the exhibition’s “opportunity to make an artist do something they wouldn’t ordinarily do.”

Although he was absent the day we visited, the evidence of Michael Horswill’s work was powerful. A North Idaho College instructor better known for mixed-media sculpture, Horswill also teaches drawing and recently produced a series of charcoals related to his “Earth Machines” series.

“I wanted to only work with charcoal and erasers to see what could be done with just those simple tools, sort of reminiscent of cave paintings,” Horswill says, adding jokingly the only thing missing was the dirt and smell of cooking meat.

Cave drawings … that resonates: The act of making one’s mark upon the wall. We’re a species of markmakers, including the marks on this page that become letters, words, a description of an exhibition of markmaking. And although the actual marks may fade or be covered over, the understanding of them will hopefully endure forever.