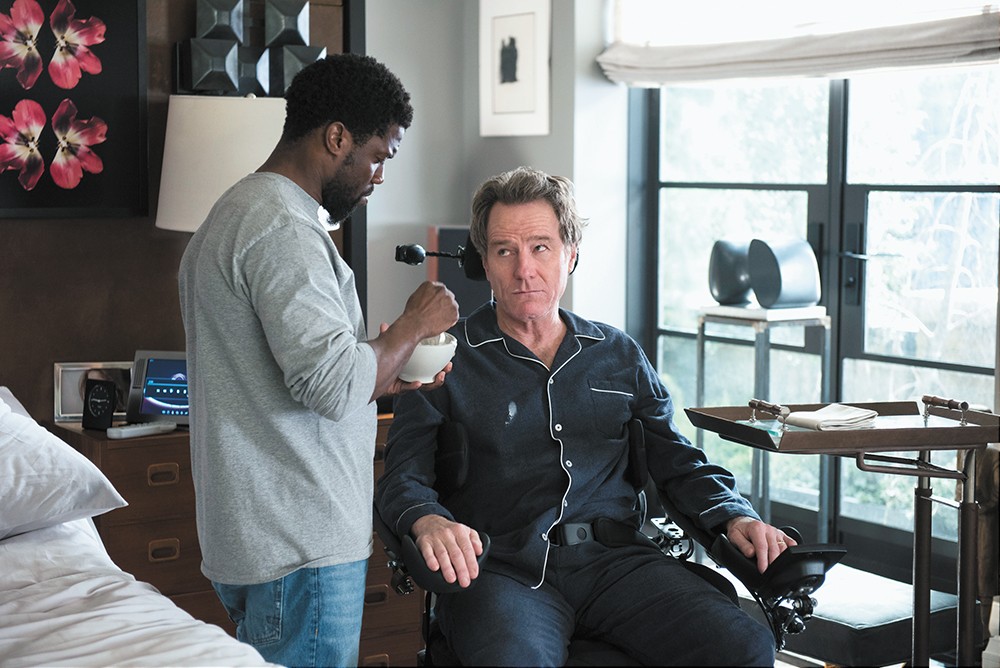 The Upside makes a true story contrived and phony.

Everything about The Upside feels contrived and phony, like the movie version of an inspiring-but-fake anecdote your aunt shared on Facebook. Which is impressive, considering it's a true story.

Of course, it's more directly a remake of the French film The Intouchables, which itself was inspired by a documentary about a wealthy Parisian quadriplegic who hired an unqualified French-Algerian ex-con as his caregiver. The inauthenticity that plagues The Upside could have crept in at any point during that game of telephone (and plenty of people thought The Intouchables was shallow glurge to begin with).

This version, directed by Neil Burger (Divergent, Limitless) from a screenplay by first-timer Jon Hartmere, stars Kevin Hart as Dell Scott, a rude parolee with a bad attitude who doesn't want a job so much as he wants to get signatures from potential employers showing that he tried to get a job, to appease his parole officer. Thinking he's applying for a janitorial position, Dell barges into a Park Avenue penthouse where morose quadriplegic tycoon Phillip Lacasse (Bryan Cranston) and his executive, Yvonne (Nicole Kidman), are interviewing full-time live-in caretakers, complains about being kept waiting and demands a signature so he can get out of there. Over Yvonne's strenuous, well-founded objections, Phillip offers Dell the caretaker job.

Dell, self-centered and emotionally stunted (note: the movie does not realize this; the movie thinks he's a lovable, shoot-from-the-hip rascal), is not qualified to take care of a quadriplegic man, and he flat-out refuses to do some of the tasks associated with the job. He takes the job because of the salary, but this doesn't explain why Phillip offered it or why Yvonne lets him keep it. The implication is that Phillip, who was hurt in a paragliding accident and lost his wife to cancer, chose the worst applicant because he just wants to die. But that doesn't come across except by implication, and even then doesn't feel plausible.

The rest is just as artificial, peppered with wacky comedy moments like Dell being surprised by the high-tech shower in his bathroom, Dell refusing to change Phillip's catheter or even say the word "penis," Dell driving recklessly through Manhattan with Phillip in the passenger seat and telling cops that they were rushing to the hospital. Phillip gradually gets a new lease on life, which is attributed to Dell's influence, though I'm hard-pressed to point to an example of Dell being helpful.

Dell comes to share Phillip's love of opera (after talking and laughing through one and threatening to beat up the people who dare shush him) and catches up on child-support payments to his ex-wife but doesn't really change in any other way. He never realizes what an A-hole he is, and by the end he's claiming he was the most qualified applicant on the grounds that he and Phillip have become pals. It's a story about a jerk who learns nothing, disguised as a heartwarming story of opposites-attract friendship.

The Upside might have been better if it had focused on the character who does evolve, the one whose emotions are relatable and who seems more or less like a real person. But despite a game performance by Cranston, Phillip is rendered a supporting player in his own life. Even the things about him that are probably based on fact, like his love of opera, feel like movie clichés. It probably goes without saying that the realities of being paralyzed from the neck down are not addressed in any meaningful way. This is weak stuff all the way around, a blob of unflavored Jell-O that you're supposed to find delicious just because it went through the motions. ♦

The original print version of this article was headlined "Upside Down"