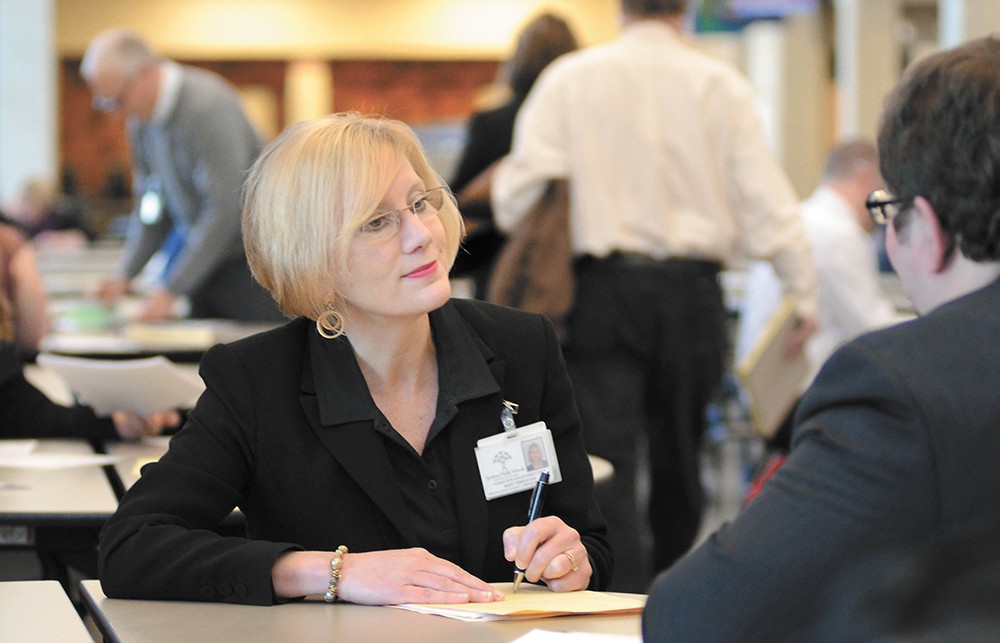 before the start of the school year. But by the time Roettger, the superintendent of Lind-Ritzville Cooperative Schools, called the few teachers who applied last June, they had all been hired elsewhere.

Between Lind-Ritzville middle and high school, there are typically four math teachers on staff, Roettger says. The two conjoined districts, about an hour-long drive southwest of Spokane, were eventually able to hire one teacher and had to leave the other position unfilled.

"It's a big issue not to be able to fill a math position," Roettger says. "That, to me, demonstrates shortage of staff."

Roettger says his district, like others in Washington and Idaho, will start recruiting teachers earlier in the year. Meanwhile, Spokane Public Schools has already started recruiting teachers more aggressively than ever before in the midst of a teacher shortage. Spokane has so far been able to fill most job openings, but other schools, especially in rural areas, often can't compete.

In a November 2015 survey, 45 percent of 733 Washington state school principals reported being unable to fill all of their school's open positions with fully certified teachers.

Idaho's teacher shortage is more serious. A 2014 study found that only 10 of 65 districts were able to hire fully certified staff for vacant positions. Only one district reported no challenges in hiring teachers.

District superintendents in both Washington and Idaho say the shortage is in part driven by the high number of baby boomers retiring and possible disinterest in teaching from college students.

As a result, districts have changed recruiting tactics, says Marion Moore, associate professor of special education at Eastern Washington University. College students are being offered provisional contracts before they are finished student teaching, and districts are seeking commitments earlier.

"The shortages are now. And I think that there is a significant concern, because the shortages will probably get worse over the next few years," Moore says. "People are really concerned about 'How do we address this need?'"

in Idaho, says he pulls out all the stops when recruiting. Even after sending out flyers to colleges, attending job fairs and posting jobs online and in the paper, he says it's increasingly difficult to find teachers.

When he can't find them, sometimes elective courses are dropped in high school or switched to only being offered online. It's not the ideal situation, Kren says, but sometimes it's the only choice.

"It's going to impact [students] negatively. The consistency of having those teachers there is pretty important," he says.

St. Maries School District has about 950 students and 67 teachers, Kren says, and teachers often leave for a bigger district if given the opportunity.

"There are larger districts, or districts from other states, who can offer signing bonuses and pay for travel. We're not able to offer any of that," he says.

Some subject areas are hit harder by the teacher shortage than others. Some positions in special education, for example, simply cannot be filled. In the Washington state survey of school principals, roughly two-thirds reported difficulty finding new special education teachers — by far the highest rate of any subject in the survey.

The explanation is simple, according to Debbie Tully, associate dean of teacher education and school partnerships at Whitworth University: college students with an interest in those subjects would rather choose a career that pays more.

"We have bright individuals who, if they like math or science, they are going into pre-medicine or health sciences. They are not thinking of teaching as a career," Tully says.

, a line of more than 100 aspiring teachers extended from the commons to the door.

A total of 250 people showed up to the hiring fair over the course of four hours, says Mary Templeton, Spokane Public Schools' director of certified personnel. The district offered around 30 of them letters of intent that day, while others were asked if they wanted to be a substitute.

Stacey Valentin walked away from her interview feeling confident. Valentin, 37, went to the hiring fair to set herself up for a position starting in 2017, when she will no longer be serving in the Navy. At the most recent hiring fair she attended in Tukwila, she was offered a job on the spot.

Valentin says other districts in the middle of the state have expressed interest as well, but she doesn't think moving to the west side of the state is worth it. Her first priority is to stay in Spokane, which likely means that rural areas are left out of the running.

"It doesn't pay enough to relocate for a teaching job. It really does have to be in the area that I live in," Valentin says.

Templeton says a hiring fair like the one last week has never before happened this early in the year. The district wants to make sure that it will have enough teachers when the next school year begins.

"Is our level of concern off the charts? No," Templeton says. "But we are very closely monitoring it."

The teaching landscape used to be different, says Spokane Education Association President Jenny Rose. College students used to have to know somebody or be an outstanding student in order to get a teaching job. Districts, Rose says, would not contact college students until the last semester of their senior year.

There used to be a substitute teacher list of 1,000 people in the 1990s, she says. The list is now half that, meaning the district has fewer options when hiring full-time positions.

Spokane has been able to fill all of its teaching positions, but it hasn't been an easy task. One of the solutions to solving the teacher shortage — hiring from the pool of substitutes — exacerbates the shortage of subs. The district has resorted to reaching out to parts of the country where there is a teacher glut and advertising open positions there, Templeton says.

The state anticipates a significant teacher shortage in the next three to five years. In a request to the state legislature, Randy Dorn, state superintendent of public instruction, predicted that 10,000 teachers will need to be hired in the next few years due to the implementation of full-day kindergarten and a K-3 class size reduction.

At the beginning of the current legislative session, Dorn made a number of requests to lawmakers. He asked the legislature for money so districts can offer signing bonuses when hiring new teachers, an increase in starting salaries for teachers, and a change that would allow districts to hire recently retired teachers as subs.

Vincent Alfonso, dean of the School of Education at Gonzaga, says he is optimistic that the teaching shortage can be solved if the state legislature takes steps to professionalize teaching again.

"We can look at this as a problem or as an opportunity," Alfonso says. "Let's look at this glass half-full and not half-empty, but it needs to be a concerted effort by all the stakeholders to be working on the same page. And I'm not sure we're there yet." ♦