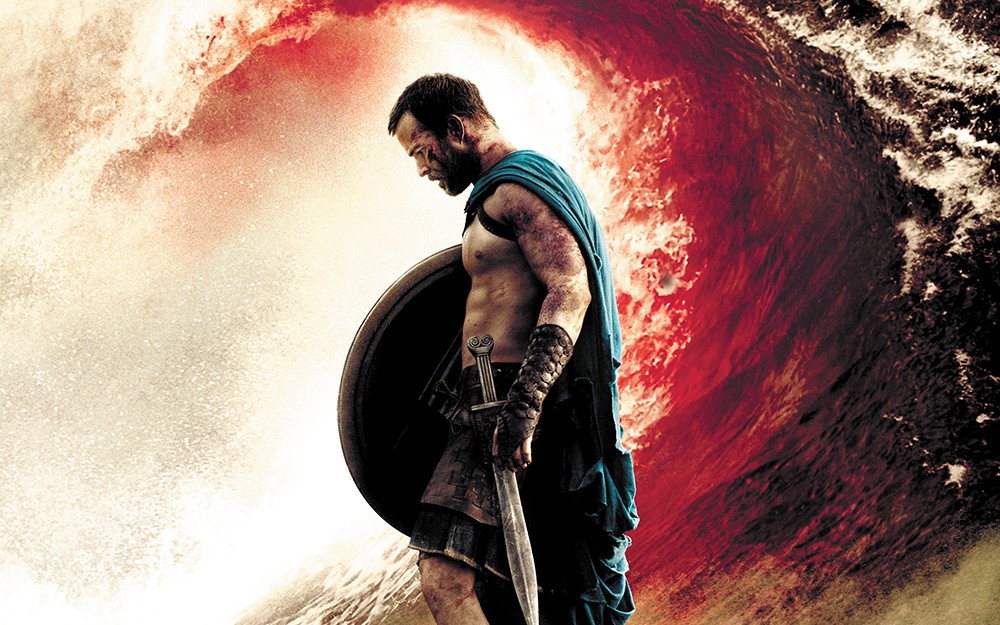 Early in 300: Rise of an Empire, a spirited "debate" breaks out in the middle of the Athenian Senate. The powerful Persian army is headed to Greece, led by the "god-king" Xerxes (Rodrigo Santoro), and Athens has little naval power to confront the Persian fleet. Should they surrender rather than face destruction? Should they take the advice of the war hero Themistokles (Sullivan Stapleton) and try to unite the Greek city-states to preserve their freedom? The representatives of various factions grab one another by the togas and hurl themselves around the Senate floor in the passion of their respective positions. There's something at stake here, and these flesh-and-blood men care enough about it to wrestle one another to the ground to make their point.

All things considered, I'd much rather watch 100 minutes of that furious exercise in democracy than what passes for martial adventure in 300: Rise of an Empire. Like its predecessor — director Zack Snyder's 2006 adaptation of the Frank Miller graphic novel 300 — it attempts to turn ancient history into a swords-and-sandals epic, only with virtually every part of its world created in digital postproduction. This one takes itself less seriously than the original — mostly thanks to one gleefully crazy performance — but it's still profoundly uninteresting to anyone who isn't there exclusively to see a parade of impossibly chiseled male torsos.

The events take place largely at the exact same time that Gerard Butler's Leonidas was leading his stalwart 300 Spartans against the Persians in the first movie, but on a different front of the same war. Themistokles leads his own men against impossible odds, with the fierce general Artemisia (Eva Green) leading the massive Persian navy. He's got a few tricks up his ... well, "sleeve" isn't the appropriate word for these resolutely bare-chested warriors, but he's going to do his best to hold out until he can convince the other city-states to face the threat as a united Greece.

That means plenty of ferocious hand-to-hand combat, rendered by director Noam Murro in Zach Snyder's familiar style of slowing down the action at arbitrary moments and letting loose with torrents of digitally rendered blood. But the blood doesn't actually resemble anything inside a human body — it looks more like strawberry jam as it sweeps across the screen — and the fountains that issue forth from even the most superficial wound make it seem as though the combatants are less men at war than fragile jelly donuts. The silliness of these 300 movies is in large part attributable to the fact that the anonymous hunks of brawling beefcake are engaged in a version of warfare that pretends to be gritty but feels like a game. It's both absurdly bloody and genuinely bloodless.

The notable exception comes whenever Green is the center of attention. Playing a native Greek with a traumatized past and plenty of axes to grind, Green commits thoroughly to being the baddest mofo in the room, ready to kiss the head she just severed. Glaring with heavily lined eyes over cheekbones sharper than her swords, her wardrobe a majestic display of bondage gear with kicky skirts, she provides a burst of energy found almost nowhere else in a story that sometimes feels like it's half flashback stories full of expository narration, half inspirational rallying cries ("We choose to die on our feet rather than live on our knees!") that may have been discarded first drafts of King Henry V's St. Crispin's Day speech.

The most indelible moment in 300: Rise of an Empire occurs during a lull between battles, as Themistokles visits Artemisia's barge for a negotiating session — which consists of throwing each other around the room in some of the angriest sex you'll ever see. Stapleton may be terminally bland throughout the rest of the movie, but he certainly comes to life when bouncing off of Green's mad villainy. Naturally, there's an audience that'll be interested in the movie's Greeced-up abs and pecs, and the snippets of campy craziness. Yet it's also telling that in a story that's supposed to be all about brutal feats of spear, sword and shield, the only scenes that really register involve policymaking turned physical. ♦

300: Rise of an Empire is not showing in any theaters in the area.