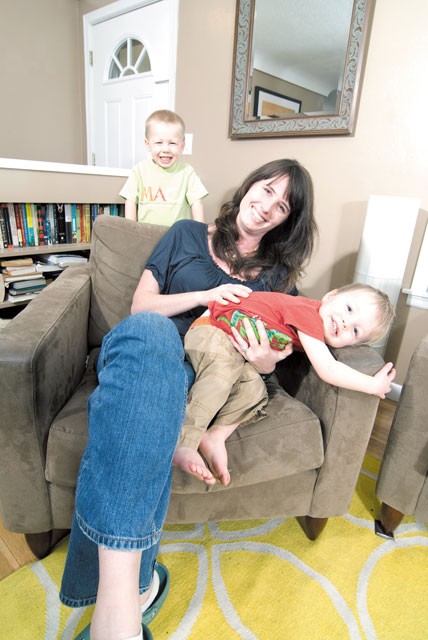 Tammy Marshall
For Spokane mom Tine Reese, it became a simple imperative: I have to take care of myself and my baby.

A 27-year-old mother of two finishes her shift at a small pharmacy. Although she gave birth four weeks ago, her slowly healing C-section wound has been gaping for nearly two weeks. She is alternately dizzy and feverish.

Another new mom, of relatively the same age, also gave birth four weeks ago. But her employer is paying her as she sleeps near her baby. A family member does her laundry and food preparation in the next room. She won’t be expected back at work for 8 more weeks.

If you guessed that the pharmacy employee with the gaping wound was the American, you’re right!

Stories like the pharmacy tech’s and those of other sleep-deprived, overwhelmed new moms across our country compelled women’s issues reporter Sharon Lerner to write The War on Moms: On Life in a Family-Unfriendly Nation.

To be clear, Lerner states at the beginning of most book readings or interviews, she voted not to use this title (her publisher had final say) but maintains that her collection of profiles makes a strong case for the metaphor of our life in the trenches.

“There is no concerted effort to kill or maim women who have children,” Lerner states in her introductory chapter. However, “life in its overwhelming, multitasking reality has become increasingly hellish for women in this country ... If no one is aiming actual projectiles at mothers, the willful refusal to acknowledge and address the conditions that make so many of their lives unmanageable amounts to very real assault.”

The War on Moms asks why the United States is the only industrialized country in the world with no federally funded family-leave or child-care. And: How much longer can moms keep up the lonely charade that they’re “handling it” on their own?

Only 15 percent of all state and local government workers, and just 8 percent of private industry workers, have paid time off with a newborn.

The Family Medical Leave Act of 1993 requires employers to offer full-time workers (whoever is determined as the primary caregiver) 12 weeks of unpaid leave. But less than half (just 42 percent) can afford to take it.

Other new parents save up vacation or sick leave, or quit working. That’s part of why, according to the Department of Health and Human Services, having a baby is the number one cause of poverty spells in the U.S.

Tine Reese was one of those “lucky” few moms who was able to take advantage of paid leave. While she now runs a nonprofit group from her Spokane home, at the time of her first birth she was co-owner of a busy California company.

“I went back to work when Mac (now 4) was 8 weeks old. I worked about 60-70 hours per week; I hadn’t mentally prepared myself for the separation from my child, the stress of working and not getting sleep,” she remembers.

“I didn’t have time to be with the infant I had waited all my life for — but I was our main source of income. I had to stop breast-feeding ... I had basically stopped eating and sleeping. It was a horrific experience,” Reese concludes.

“My doctors wanted to put me on drugs and told me ‘formula is fine’... I was so torn,” she says. When her baby was 4 months old, she quit.

“I threw all the cards up in the air and I said ‘I don’t care what happens, I have to take care of myself and my baby.’”

“People talk about work and life competing,” Lerner writes, “but the truth is that life almost always wins.”

Maryellen, a single mother who works in public health, moved back to Spokane after she failed to juggle everything on her own in Seattle.

“I thought that I would just go back to working full-time after my baby was born, because that’s what people do,” explains Maryellen, “but then I met him, and my plans changed.”

She managed to pull together more than a month of vacation and sick-leave, and then went to work part-time.

“More than half of my income went to daycare, and I didn’t make enough to pay for rent and food, so I went to get food stamps,” Maryellen remembers. Having always worked with poor families in health crises, Maryellen was stunned by the way she was treated by an employee.

“I had my six-month-old in a sling. ... She did not acknowledge that I had a baby, or even make eye contact; she notified me that I was eligible for a tubal ligation. When I went back to get the food stamps, there was no discussion of a team plan, like ‘Let’s do this for a few months, we’ll get you back on your feet.’”

“They never acknowledged that I had two degrees ... that I was psyched to get back to work. I wanted them to know ‘I’m not like these other people,’ but then I realized the folly. We’re all the same,” she says. Some of us have less money, and fewer backup plans.

Maryellen finally moved to Spokane to live with her parents, who helped take care of her son while she worked.

What may be most shocking to American moms is the degree to which other countries cater to the needs of young families. France and Spain offer a (lifetime) combined six years of paid or partially paid family leave for each couple. Sweden offers 18 months of paid leave. So do Denmark, Norway and the Netherlands.

These countries also boast high rates of flexible part-time work options for both moms and dads. Even Bolivia, Chile, Kenya and Djibouti are among 168 countries that offer paid maternity leave and child care.

The closest our country has come to federally funded family leave and child care was in 1971.

“The Comprehensive Child Care Development Act would have established child care as a right … established high quality standards and money” for training child care workers, explains Lerner, “But, alas, although the bill passed both the House and the Senate, President Nixon killed it.”

Nixon explained in a post-veto speech that passing the act would have been “irresponsible,” because it would encourage “communal approaches to child-rearing over the family-centered approach.”

They point to Head Start co-founder Dr. Uri Bronfenbrenner’s theory about “The Anglo-Saxon Mode,” in which, they say, “child care is viewed as a private responsibility (promoting) the ‘rugged individualism’ that distinguishes America from those, pansy, socialist dupes on the other side of the Atlantic.”

But a study by the National Center for Children in Poverty finds that offering postpartum leave would not only improve the health of mother and baby by promoting sleep and successful breastfeeding, it would help businesses “through increased employee retention, reduced turnover and increased loyalty and morale.”

And according to Lerner, “Economists estimate that for every dollar invested in high-quality pre-K programs, taxpayers save up to $7 in reduced need for cash assistance, criminal justice services and remedial education.”

While the word “communal” was used strategically during the Cold War years to imply “communism,” it also implies another glaring absence in moms’ individual struggles to do-it-all: community.

Rinzen Kruger, who has been a mother since age 15, now has the opportunity to share her skills and wisdom as a breast-feeding counselor.

“I think we all have to work on moms’ behalf,” she says. “If we are taught to believe in and to listen to our own bodies, we would know when to go back to work,” she says. “We need to raise our women to have the self-esteem to advocate for themselves.”

“I think Lerner is right in elevating this matter to the phrase ‘war,’” says Reese. “Until we consider what’s happening to new moms, or in child care, we will never prioritize it. We will never put the money into it.”

Washington is one of only three states to pass a paid family-leave law. Legislators voted in 2007 to establish five weeks off with a flat $250 weekly payment, but the details and costs to employees and businesses are still being determined.

Lerner says she has been told her book is a downer, but she wants readers to get “fired up” by what they’re learning.

“Women are already at their limit,” she says. “Our workforce numbers are very high, relative to men. We can’t keep progressing and not supporting the work of caretaking. Women can’t keep doing what they’re doing without some help.”