How Washington's governor, attorney general and legislators are arming themselves for battle with the feds 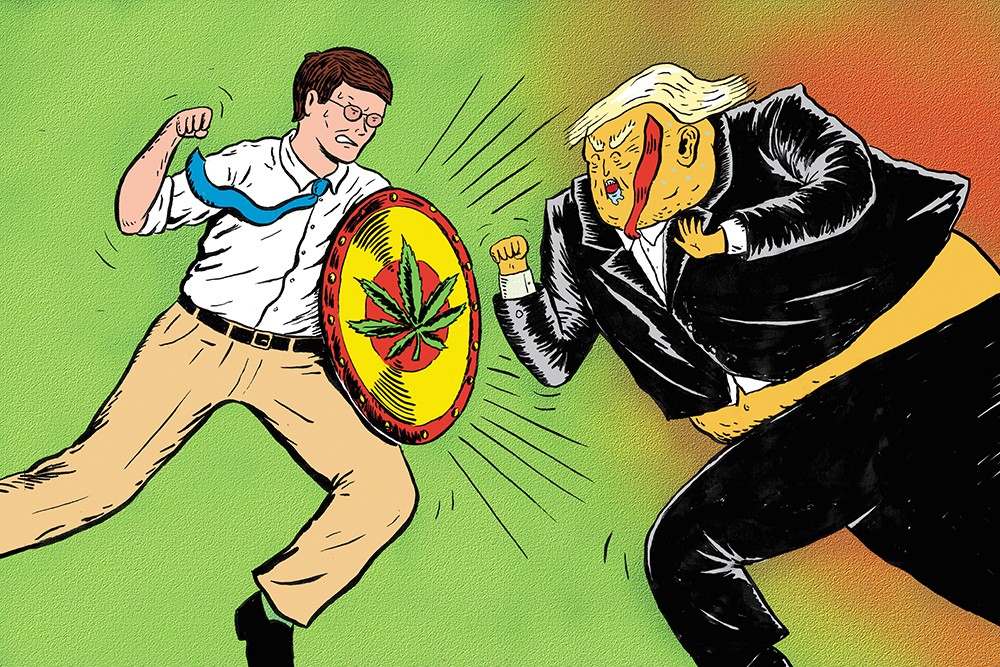 He hates it so much, he once said — claiming he was joking — that he thought the Ku Klux Klan "were OK until I found out they smoked pot." He hates it so much that he called medical marijuana "only slightly less awful than heroin."

"I realize this may be an unfashionable belief in a time of growing tolerance of drug use," Sessions told state and federal law enforcement officials in March. "Too many lives are at stake to worry about being fashionable."

Sessions' portrayal of life-or-death stakes regarding cannabis is factually suspect, to say the least. According to the Centers for Disease Control, "no death from overdose of marijuana has [ever] been reported."

Still, Sessions' new "violent crime task force" plans to reassess Justice Department policies regarding marijuana. So as more growers and retailers have sprouted up in the state of Washington, the threat of a federal crackdown remains a serious concern.

THE CASE FOR DISCRETION

The problem for Washington — and the 27 other states (and the District of Columbia) that have legalized recreational and/or medical marijuana — is a basic one: Federal law still says that cannabis is illegal. And federal law typically trumps state law when it comes to controlled substances.

Since August 2013, states have been relying on a memo from former Deputy Attorney General James Cole. The "Cole memo" makes it clear that marijuana is against federal law, but also says that the federal government won't target most marijuana growers or retailers. Instead, the feds would concentrate on areas like drug cartels, sales to minors, and pot being taken across borders to states where it remains illegal. It's a foothold — albeit a small one — for states like Washington to use to brace themselves against federal action. While Sessions has vaguely criticized the Department of Justice for not following the Cole memo's guidance strictly enough, he expressed support for its principle.

"We're not able to go into a state and pick up the work that the police and sheriffs have been doing for decades," he has told reporters.

A letter from the governors of Washington, Oregon, Colorado and Alaska, sent to him on April 3, urges Sessions to abide by the constraints of the Cole memo.

"Changes that hurt the regulated market would divert existing marijuana product into the black market and increase dangerous activity in both our states and our neighboring states," the governors write.

A letter from eight senators — including Washington Sen. Patty Murray — in states that have legalized marijuana pointed to President Donald Trump's campaign rhetoric.

"On the campaign trail, then-candidate Trump stated that despite his personal views regarding marijuana use, legalization should be left to the states," it reads.

Rep. David Sawyer — a Democrat from Parkland, south of Tacoma, who chairs the House Commerce and Gaming Committee — says that Washington has the advantage of being one of the most tightly regulated legal marijuana markets, where every plant is closely tracked. He suggests that it would make a lot more sense for Sessions to focus on other problems before targeting Washington.

"I think it would cripple his capacity to do anything else, if he went after all these states," says Sawyer. "It is not a decision he can take lightly. The cat is out of the bag. We now sell more cannabis than hard alcohol."

STRIKING BACK AT SESSIONS

But if Sessions decides to go after legal marijuana, Washington State Attorney General Bob Ferguson tells the Inlander that he's ready to strike back.

If Sessions decides to crack down on marijuana in states where it's legal, Nick Brown, general counsel for Gov. Jay Inslee, says there are a number of ways that he could target cannabis. Sessions could add to the priorities outlined in the Cole memo, targeting broader types of marijuana sales. That, Brown says, is the sort of thing that Washington state could adapt to.

"At the front end, we have been trying to engage the feds as much as possible about any changes we need to make," Brown says.

Sessions' approach could be bolder, initiating a number of legal actions against states which have legalized marijuana, risking fighting numerous legal battles against them at the same time.

Or it could hit marijuana growers or retailers one by one. Individual U.S. attorneys, after all, have a lot of discretion regarding which cases they pursue.

Spokane County Prosecutor Larry Haskell, a candidate to become U.S. Attorney for the Eastern District of Washington, didn't discount the possibility of prosecuting marijuana retailers and growers if he's picked.

"Under federal law, marijuana is illegal," says Haskell. "I believe in following the law unless it's changed."

Still, federal prosecutors would then have to put a potential case before a jury.

"The idea that you might convince a Seattle-based jury that a licensee currently operating under state law and with federal acquiescence?" Brown says. "You might face an uphill battle."

"As a policy matter, that may make some sense," Brown says. "As a legal matter, they're both illegal under federal law."

Sawyer and others in this state are looking at strengthening regulations that ban advertisements that appeal to children or are broadcast out of state, in an effort to ensure that the feds don't have an excuse to pick on Washington.

He also has another bill floating out there: Treat marijuana enforcement the same way that "sanctuary cities" treat immigration enforcement.