The weather, family visits, the economy: all great excuses to get your booze on 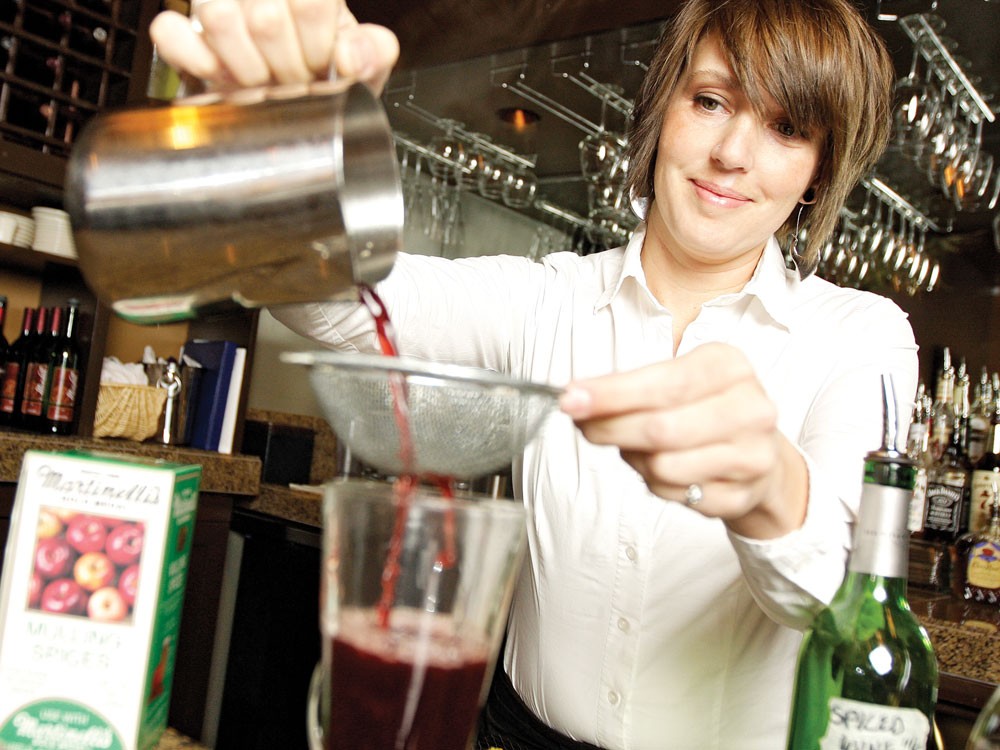 The holidays can be magical and all, but the bitter cold and lack of sunlight coupled with a crappy economy and an in-law invasion could easily drive anyone to drink. And that’s no lie: The Distilled Spirits Company of the United States reports that a quarter of liquor companies' profits is made in the stretch between Thanksgiving and New Year’s alone.

Chances are (and statistics indicate) you’ll be out sometime this season imbibing some sort of boozy concoction, and you’ll probably notice the offerings have gone the way of their culinary counterparts. Fruit kebabs are swapped out for cinnamon sticks. Margarita glasses are replaced by mugs. Liquors of the spicy and herbal variety are chosen over the sweet and refreshing.

Eggnogs and hot buttered rums are standard at any bar you may visit, but many mixologists also create seasonal spins on classic drinks as well as completely new and original elixirs.

So after one Saturday night, seven gracious bartenders, one beer-soaked notebook, one back alley bathroom break, three inexplicable cellphone pictures, and one spontaneous laugh that sprayed grapefruit booze all over all over my husband’s face, we found four notable seasonal drinks around town that will spice up those dark and dreary winter evenings.

Place spices and wine in a pot and steep in refrigerator for 48 hours.

Add brandy, juice of the orange and lime, and brown sugar and heat until steaming. Strain into a mug and serve with cinnamon and nutmeg.

Franz takes a traditional recipe and tweaks the preparation a bit to improve on the flavor. “I cold brew the wine with the spices for 48 hours instead of on the stove because it makes the drink bitter,” she says.

Despite being one of the oldest holiday drinks, mulled wine (known as gluhwein in Germany, or glogg in Scandinavia) is one of the lesser known.

Spicy, assertive, yet well-rounded, it heats the belly and lends a glow to the cheeks. The brown sugar softens the tannic cabernet, and its flavor is brightened with citrus. Definitely the drink for a mellow evening curled up on the couch with friends or family.

Though summer is long gone, some of its remnants remain captured and distilled in bottles on Bon Bon’s shelves.

“You see produce disappear in restaurants, and menus evolve,” says Shawn Heale, “I like to keep my drinks seasonal as well.”

One of his original creations, the Flatland Yeti is a hazy lemon yellow, bubbly, light and refreshing, yet the addition of ginger liqueur adds a pleasant warmth as it goes down. It’s like a warm summer day … in a glass.

What is winter without a steaming mug of cider? The Hot Apple Pie, though incredibly simple, won the dangerously delicious award for the evening.

Sweet but not cloying, the cider completely masked the already smooth and deceptively intoxicating Tuaca. The burn of the booze was mistaken for the temperature of the beverage.

This crowd pleaser is best served when guests have varying drink preferences, as all our drinking companions had nary a complaint about this little gem.

Muddle together mint, simple syrup and Cardamaro in a mixing glass. Add cranberry juice, bourbon and ice and shake vigorously. Strain and garnish with mint and cranberries.

In addition to being informative, Cooper has a flair for turning drink preparation into a spectacle. After straining the smash into a glass, he claps mint in his hands, releasing its essence.

The result is a complex, spicy drink whose initial minty aroma slowly evolves as it warms. Its familiar bourbon burn is not one to put hair on the chest, but rather warm your bones after trekking through the blistering cold.