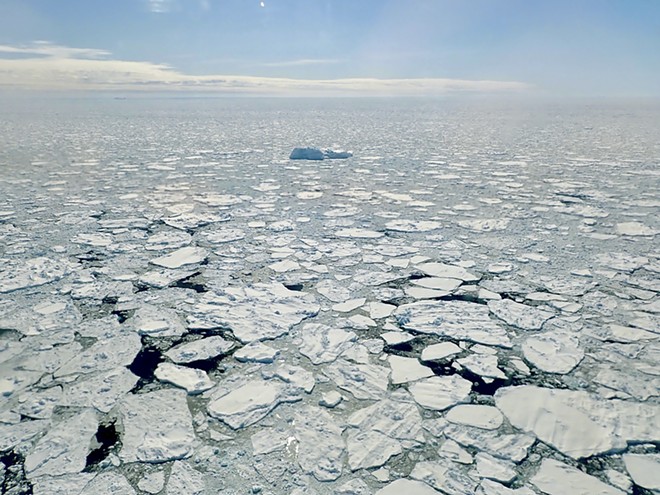 Joe MacGregor/NASA IceBridge via The New York Times
In a photo from NASA, sea ice along Greenland's coast, April 27, 2018. The Arctic has been warmer in the past five years than at any time in the modern era, scientists said. The effects can be felt far beyond the region.
By John Schwartz and Henry Fountain

Persistent warming in the Arctic is pushing the region into “uncharted territory” and increasingly affecting the continental United States, scientists said Tuesday.

“We’re seeing this continued increase of warmth pervading across the entire Arctic system,” said Emily Osborne, an official with the National Oceanic and Atmospheric Administration, who presented the agency’s annual assessment of the state of the region, the “Arctic Report Card.”

The Arctic has been warmer over the last five years than at any time since records began in 1900, the report found, and the region is warming at twice the rate as the rest of the planet.

Osborne, the lead editor of the report and manager of NOAA’s Arctic Research Program, said the Arctic was undergoing its “most unprecedented transition in human history.”

Some of the findings in the research, provided by 81 scientists in 12 countries, included:

— The wintertime maximum extent of sea ice in the region, in March of this year, was the second lowest in 39 years of record keeping.

— Ice that persists year after year, forming thick layers, is disappearing from the Arctic. This is important because the very old ice tends to resist melting; without it, melting accelerates. Old ice made up less than 1 percent of the Arctic ice pack this year, a decline of 95 percent over the last 33 years.

— Donald K. Perovich, a sea-ice expert at Dartmouth College who contributed to the report, said the “big story” for ice this year was in the Bering Sea, off western Alaska, where the extent of sea ice reached a record low for virtually the entire winter. During two weeks in February, normally a time when sea ice grows, the Bering Sea lost an area of ice the size of Idaho, Perovich said.

“The report card continues to document a rapid unraveling of the Arctic,” said Rafe Pomerance, chairman of Arctic 21, a network of organizations focused on educating policymakers and others on Arctic climate change. “The signals of decline are so powerful and the consequences so great that they demand far more urgency from all governments to reduce emissions.”