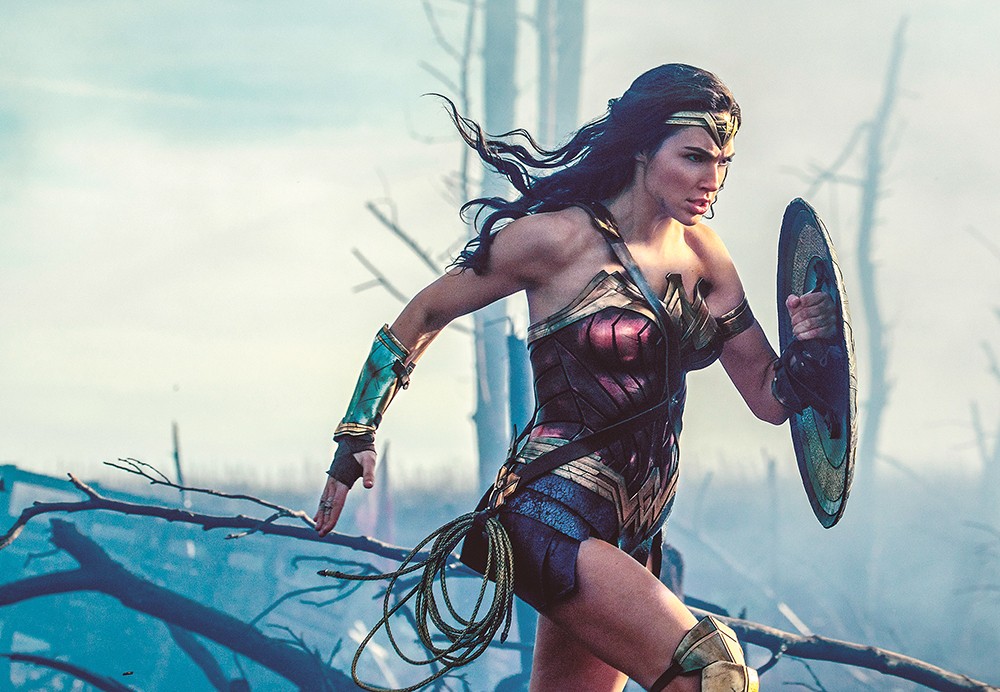 Wonder Woman finally gets her own movie, and it was worth the wait.

— bullets, bronze and mustard gas included — in what for any other superhero would be a distinctly Marvel origin story. This, uh, wonderfully directed and near-perfectly cast female empowerment story is so similar in tone and feel to Marvel Studios' Captain America that I was waiting for Stan Lee to show up, possibly as a eunuch.

But no, this is a woman's game all the way, replete with Greek mythos, star-spangled corsetry and an exhilarating performance from Israeli actress Gal Gadot as Diana, Princess of Themyscira (aka Wonder Woman, although no one says it aloud), the bullet-deflecting, Lasso of Truth-whipping and utterly feminist heroine created by writer William Moulton Marston and illustrator Harry G. Peter circa 1941. That's around the same time that Marvel's shield-wielding Cap arrived in "the funnies," and both heroes were born amidst the chaos of World Wars, fighting for truth, justice and freedom from bellicosity in comic books that were ultimately shipped to the European Theater to buck up weary Allied grunts and airmen.

But you already knew that history lesson, right? Fair enough. Director Patty Jenkins, an Army brat herself, hews religiously to the Wonder Woman backstory, with a screenplay by Allan Heinberg (with story credit help from Jason Fuchs and Zack Snyder). Created by Zeus to defend humankind from Ares, the God of War, Diana is Amazon royalty. When Yank spy/pilot Steve Trevor (Chris Pine, riffing on his Captain Kirk character perhaps a tad too much) is shot down over the hidden island chain of Themyscira while being pursued by vengeful Germans, she's honor-bound to defend a world of men she does not yet fully comprehend.

The Great War rages along the 400-mile-long Western Front with the lives of millions of innocents hanging in the balance. So what's a princess with powers unknown even to herself to do? Set out to kill Ares and stop the very idea of war forevermore.

It's worth noting here that, amongst all this history-warping discussion of possible armistice or destructive chemical warfare, Wonder Woman isn't just femme-inclusive, but open to all nations, colors, creeds and religions (including Paganism, obviously). The various heroes, immortal or otherwise, band together to defeat not only Kaiser Wilhelm and company, but also the hidden lust for death and mayhem that, as Diana learns, is part and parcel of every human being. It's not just Ares who's responsible for the 25 million dead in World War I — it's us.

That is Wonder Woman's most noble armor, after her heavy shield and her seemingly incorruptible moral standing. Thanks in no small part to Trevor's unshakable wartime ethics in the midst of the largest killing field in all of history, Diana learns fallibility of the human kind. Sworn to save the innocent and steady the scales of humanity's war against hope itself, Wonder Woman emerges as the epitome of female strength, compassion and, yes, kick-assery.

This may feel like a Marvel movie, but Diana Prince constitues her own constellation. Men need not apply, unless of course they fight for all men and women, and the right to give peace a chance. ♦

Wonder Woman is not showing in any theaters in the area.