The region uses water more efficiently. But will conservation efforts be enough to help recharge the Spokane River? 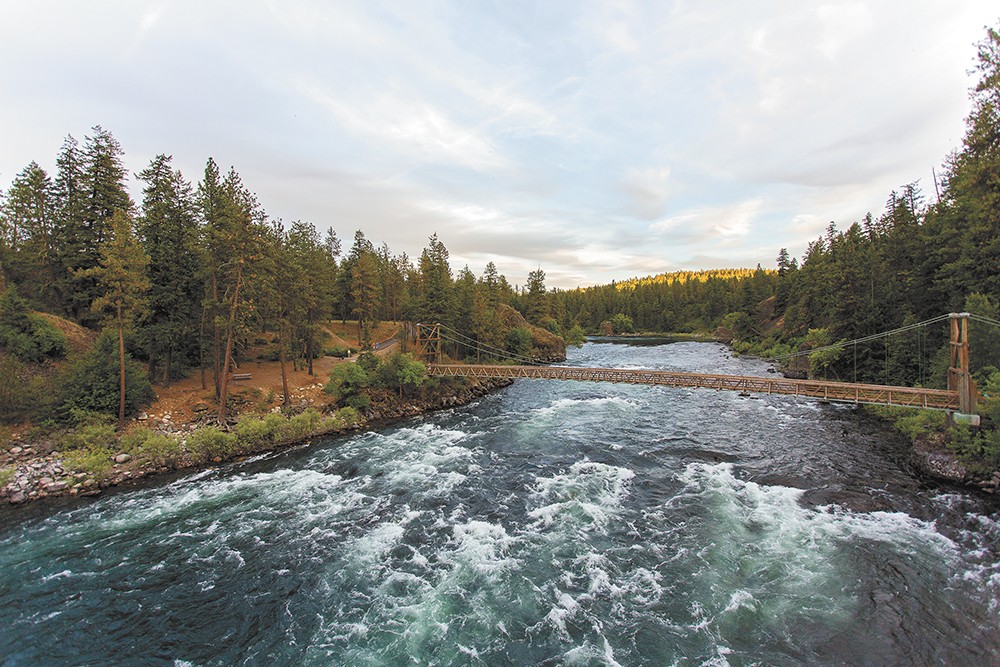 Matt Weigand
The Spokane River provides habitat for aquatic life, recreation and is a defining feature of the region. But its flow levels have been declining.

to get people to understand the true value of water and give them tools to conserve it.

For the past two years, Zimmer has worked as the city of Spokane's water stewardship educator. She shows up to classrooms to play games with kids aimed at educating them on water use in hopes they'll take the lessons home. She sets up tables at street fairs, letting passersby know about the resources the city has to help them reduce their water use, including free audits of their house's plumbing and low-flow shower heads.

"[Water] is not infinite," she says. "And it's part of what makes our city so awesome here. We have this beautiful river here, so I'd like to keep that around."

The Spokane Valley-Rathdrum Prairie Aquifer, buried under layers of rock, is the sole source of water for half a million people in Spokane and Kootenai counties, and it interacts directly with the river. Water from the river flows into the aquifer, replenishing it, and flows back into the waterway. So when water is taken out of the aquifer, that means less for the river.

"When you pump the aquifer, you rob the river," says John Osborn, conservation chair of the Sierra Club's Upper Columbia River Group, who's long been concerned about the state of the Spokane River. "We need to move this region from a paradigm of water waste to water conservation."

While water levels in the aquifer have held steady, flow levels in the Spokane River have been on the decline since the U.S. Geological Survey began keeping records more than a century ago.

Last summer, the importance of these goals was on full display when a historic drought caused flow levels in the Spokane River to drop so low that fish species (such as the redband trout) were stressed by the hot temperatures, rafting season ended early and the falls, a natural feature intertwined with Spokane's identity, seemed to be under threat.

John Porcello is a groundwater hydrologist and principal of the consulting firm GSI Groundwater Solutions, Inc. who has produced data-heavy reports on the region's hydrology. He points to some positive advancements in conservation that have slowed this decline. But as the region approaches another potentially hot and dry summer, he questions if conservation will be enough.

"What I've been trying to tell people is that the water utilities have been doing a lot of really good things," says Porcello. "But in spite of those good things, the river flows are not turning around — they're declining."

thirsty farms began using large quantities of water from the Spokane River, according to Porcello. In the 1960s, he says, agriculture turned to groundwater sources, causing the decline to slow but continue. Porcello also says that as the region has become more urban, agricultural land has been put out of production. He adds that urban environments use less water than agricultural, and these environments have steadily become more efficient in using water.

City utilities spokeswoman Marlene Feist says that greater water efficiency has meant that the city can grow while not putting more demands on the aquifer.

In 2014, the Spokane City Council passed a resolution updating its water use efficiency goals. They included a goal of reducing indoor water use by half a percent and outdoor water use by 2 percent annually for the next six years. They also called for 2 percent reductions for both commercial and government uses over the same time span.

Earlier this month, the city finished a report showing that every goal had been met except for one. The city had hoped that by convincing residents to not water their lawns during the heat of the day, water consumption would drop to 516 gallons per meter per day. Instead it rose to 562.

"It didn't surprise us a whole lot, given the summer we had," says Feist of the record heat that struck the region last summer, when flows in the river dropped to 700 cubic feet per second, well below the summertime average of 1,141.

So can water conservation put more water into the river? The Washington State Department of Ecology has crunched the numbers, according to department spokeswoman Brook Beeler. The department's analysis found that a 5 percent reduction in domestic water use would put 12 cubic feet per second into the river. A 15 percent reduction in outdoor irrigation would put up to 40 cubic feet per second in the river, according to the analysis.

Porcello says the problem is farther upstream, where the snowpack has been declining steadily. While this year's snowpack was normal or close to normal, the warmer nights have meant that it's melting more quickly, meaning the region could have another dry year.

"You can't make up that low flow and decline simply through conservation," says Porcello, adding, "That doesn't mean you shouldn't do it." ♦