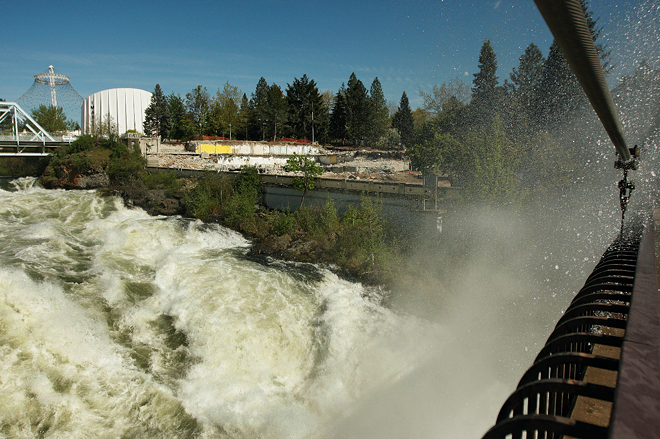 Young Kwak photo
The Spokane River, polluted by PCBs, is one of many water bodies that would be impacted by lower water quality standards.

As we wrote in the May 30 issue of the Inlander, the water quality standards are designed based on how much people would be exposed to a variety of chemicals and their related risk of cancer if they eat a set amount of local fish. The rules are designed to be protective of people who eat 175 grams of fish (about a 6-ounce filet) every day.

In 2016, Washington submitted 192 updated water quality standards to the Environmental Protection Agency, but the federal agency (under the Obama administration at the time) said the state hadn't gone far enough, and set stricter standards for 143 of the human health criteria.

Now, however, the EPA under Trump is saying Washington's science was fine, with lower standards acceptable for 141 of those pollutants.

But more than two years into implementing the stronger rules, the state doesn't want to roll back to its original proposal. Changing the standards now would require a whole new rule-making process, which is part of why Ferguson brought the June 6 suit.

The EPA decision to rollback protections came after industry and businesses petitioned the federal agency to reconsider its 2016 decision, ostensibly going to bat for the state to say its science was plenty protective, and that stricter rules would be cost prohibitive to implement.

However, members of groups who are most impacted by water quality standards, including Native American tribes, are concerned that allowing lower standards will put people at higher risk for illnesses and slow down cleanups of rivers that have already taken decades.

In Spokane, one of the most noticeable differences in the limits is for PCBs (polychlorinated biphenyls).

For decades, the chemicals were used in some household products, including waxes, swimming pool paints and chlorinators, but were more commonly used as coolants and lubricants in electrical equipment. Congress banned production of the extremely persistent chemicals by the late 1970s, but they continue to leach out of the products they were used in and into the river.

PCBs are believed to cause reproductive issues as well as increased risks for some cancers. In some places, fish from the Spokane River are not safe enough to eat due to PCB levels.

More from the AG's news release on the lawsuit:

"Clean water is essential to our quality of life," Ferguson said. "Trump’s EPA cannot change important water quality protections at the whim of industry interests. It’s not only disruptive to Washington’s environmental efforts over the past two years, it’s a clear violation of the Clean Water Act. We keep beating the Trump administration in court, and we haven’t lost yet. I don’t plan on starting now."