The Washington State Board of Health will decide at a future meeting whether Spokane Regional Health District administrator Amelia Clark broke the law last fall when the Spokane health officer was removed from his job.

At a June 1 board meeting, members discussed the findings of a preliminary investigation the board solicited last fall after Clark ousted then-Regional Health Officer Dr. Bob Lutz from his role.

Rather than vote Tuesday on whether Clark violated state law, which requires a public meeting of the local health board before a health officer can be removed, the state health board opted to issue notice of an administrative hearing. An administrative law judge could oversee that proceeding, which could happen sometime in the next three months.

The unanimous move was made in part because questions remain for several members about what happened on Oct. 29, 2020, when Clark met with Lutz and he was effectively removed from his job.

Clark discussed Lutz's job performance with the local health board in executive session earlier that day. But the board did not vote in that public meeting to fire Lutz.

By Lutz's telling, when the two met later that afternoon, Clark fired him on the spot, took his keys and district property, and he was escorted out of the building. Clark says she asked for his resignation by the next day and then told him she would go through termination proceedings.

The administrative hearing is also needed should the state health board decide to issue penalties or remove Clark from her job. While the interviews for the preliminary investigation were not done under official oath, this hearing would require sworn testimony from Clark and anyone else who participates.

ISSUES THAT LED TO INVESTIGATION

State law requires a local health board vote at a public meeting, with advance notice, for a health officer to be removed from their job.
click to enlarge 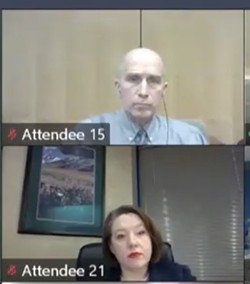 Screenshot Nov. 5, 2020
Dr. Bob Lutz (top), the former Spokane Regional Health District health officer, and Amelia Clark, the district's administrator, are shown during the Nov. 5 meeting at which Lutz was fired by the health board.


Instead, the state investigation (conducted by a Seattle law firm) found a preponderance of evidence that Clark fired Lutz on Oct. 29, in violation of state law. The report notes that Clark only put Lutz on paid leave Nov. 2, retroactive to Oct. 30, which was after public outcry over his firing drew attention to the matter.

"Ms. Clark states she put him on paid leave Oct. 30. The thing is though, there isn’t any evidence other than her saying so to support that," report author Karen Sutherland told the state health board on Tuesday. "Making it retroactive didn't somehow unfire him."

The state investigation was based on a complaint filed on Nov. 3.

The regional health board then held a meeting on Nov. 5 at which the board did vote to fire Lutz.

The state health board later initiated the investigation into Clark's actions.

The state Secretary of Health Umair Shah recused himself from the June 1 meeting because Lutz became a state Department of Health employee after he was fired by the Regional Board of Health.

"Given my involvement in the proceedings could potentially present a conflict of interest — whether perceived or real — it is in the best interest of the proceedings for me to recuse myself," Shah wrote in a letter ahead of the meeting.

Lutz continues to work for the Department of Health and is also a state board of health member, so he was also recused from the meeting.

State health board member Vazaskia Crockrell, who represents the public on the board, questioned why the administrative hearing would be needed, and whether more information is required to determine if Clark broke the law.

"I think we had ample information that was provided that Ms. Clark was wrong," Crockrell said during Tuesday's meeting. "And there’s no denying he was terminated on the 29th. ... It was wrong."

But board member Tom Pendergrass, the retired physician who moved that the board hold the administrative hearing, said that it's necessary to avoid the same type of snafu in question in this case.

"We have not done a legal procedure, " Pendergrass said. "If we are talking about any penalty for Ms. Clark, we need to now follow the rules — that we say they did not — for how we evaluate her performance."

Because the board wants an administrative law judge to oversee that hearing, it's not clear yet when that will be held.