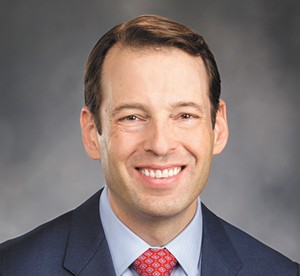 Four years ago, Gov. Jay Inslee's Justice Reinvestment Task Force issued a report identifying the key reasons why Washington state's property crime rate was one of the highest in the nation. The central problem the task force discovered: Washington was one of the only states in the nation to not supervise property crime offenders after they'd been released from prison. In other words, as soon as a car thief or burglar got out of prison, there was nobody checking to make sure they didn't reoffend.

It took four years of lobbying from Spokane area officials, law enforcement and legislators, but this Monday, Inslee finally signed a bill establishing a pilot program to provide post-release supervision for car thieves.

"As a former judge he had some important insights that helped the bill," Billig says.

In previous years, a version of the bill was proposed as just a pilot program for Spokane. That quickly ran into constitutional objections from public defenders, who argued it was unfair to give steeper sentences to some parts of the state but not others. But expanding supervision to the entire state would have been far too expensive, Billig says.

The solution? Apply it to the entire state, but with a caveat: If a judge wants to give a car thief post-release supervision, he also has to reduce that offender's prison sentence by one-third. It won't cost the state an additional dime.

The supervision program, Billig explains, isn't only about requiring prolific offenders to check in with the Department of Corrections. It's about connecting them with services, like education, drug counseling and health care, so they don't reoffend.

"It will end up saving money if we're able to reduce recidivism and make life better for everyone in the community," Billig says.

For now, only offenders accused of a motor-vehicle related property crime will be eligible. But if the pilot is shown to be effective, Billig says, it could be expanded in future years to apply to other crimes.