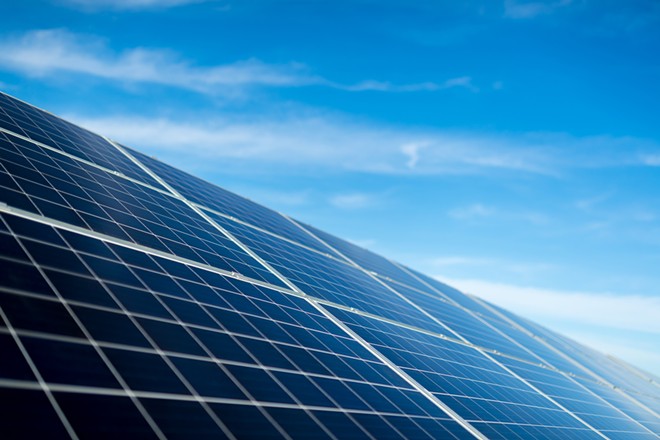 Solar infrastructure could get a boost under Gov. Jay Inslee's climate proposals.

With the 2022 legislative session starting on Jan. 10, Washington Gov. Jay Inslee and lawmakers have already started pitching climate change-oriented policies in hopes they can gather support and quickly pass their bills during the short session.

From accelerating emissions reductions by requiring electric appliances and heating in new home construction to offering "cash for lawn clunkers" like inefficient leaf blowers, the proposals vary significantly in size, cost and impact.

The session is scheduled to last 60 days, ending March 10, but there's already a growing laundry list of ideas that could go up for debate during that time.

"I think we're poised to have a lot of success on a lot of these things," says Mike Faulk, Inslee's press secretary. "Just because it's a short session doesn't mean we don't live in a critical time to get things done."

Here, we break down some of the proposals that progressive leaders in Washington state hope will make it to a vote and get official funding.

Net-Zero Ready Building Code: In order to hit greenhouse gas reductions that Washington already established, Inslee proposes requiring electrification in construction by 2034. Specifically, any building construction started in 2034 or later would be required to use only electric equipment for appliances and heating, be wired for solar panels, and have capacity for electric vehicle charging and battery storage.


Reach Code: Cities can already go beyond the existing building code requirements for commercial construction, but Inslee's proposal would expand that authority to include residential construction. This would enable cities like Spokane to reduce emissions in new home construction sooner than 2034.

That could include changes like limiting new natural gas hookups, a move that homebuilders, developers and Avista specifically tried to block in Spokane this fall with a ballot initiative, which the courts ultimately booted from the ballot.


People who turn in gas- or diesel-powered landscaping equipment could get $100 to $200 off the price of a more-efficient replacement.

"The deal here is simple, easy and lucrative for the public: All you need to do is turn in any lawn equipment clunker – working or not – and the state will give you up to $200," Carlyle says.

Inefficient internal combustion engines used in lawn equipment emit a huge amount of unburned fuel and hydrocarbons into the atmosphere, and they're not regulated like vehicle engines. Incredibly, because of those inefficiencies, using a leaf blower for an hour emits about the same amount of smog-causing chemicals as driving a 2016 sedan all the way from Seattle to Los Angeles, according to data from the Environmental Protection Agency and the state of California.

"All you need to do is turn in any lawn equipment clunker – working or not – and the state will give you up to $200."

"My goal is to accelerate the transition from old-style internal combustion lawn equipment to electric, whether it's cord- or battery-based," Carlyle tells the Inlander. Tongue-in-cheek, he adds, "I feel if this passes, I have a chance of winning the Nobel Peace Prize for bringing peace and quiet to Washington."

Decarbonization plans: Inslee's plan also would require gas utilities to submit plans to the Utilities and Transportation Commission to spell out how they'll meet the carbon reduction requirements from the 2021 Climate Commitment Act. The intent is to make sure energy prices remain affordable while utilities change the way they deliver power over the coming decades.

Help switching to electric cars: Under another proposal from Inslee, Washingtonians could get a boost toward their purchase of an electric vehicle. Buying a new one? You could get a $7,500 rebate. Buying used? You could get $5,000. Buying a zero-emission motorcycle or e-bike? You could get a $1,000 rebate. Plus, if you make less than $61,000 a year you could qualify for another $5,000 in rebates, according to the governor's plan. To qualify for the rebate, the cap on the price of the vehicles is suggested at no more than $55,000 per sedan or $80,000 for a van, SUV or truck.

The original print version of this article was headlined "Cleaning Up"