The state Senate passed legislation that would have the state commit to environmental justice principles and ensure "the right of all Washington residents to a healthful environment."

The Healthy Environment for All (HEAL) Act (Senate Bill 5489) passed 27-21 and moves to the House for consideration.

It would create a task force that would make recommendations for how state agencies should improve environmental conditions that can disproportionately contribute to health problems for certain communities.

"The real excitement is, this is like the first time in our state history that we would specifically be accountable to reducing environmental health disparity through state agencies," says Christina Twu, communications director for Front and Centered.

Front and Centered is a statewide coalition of more than 60 organizations working in communities of color, which focuses on making sure communities of color, indigenous people and low-income earners are included in the transition to cleaner energy. Those groups tend to be more impacted at every level of climate pollution but last to be included in crafting solutions, the group notes.

“This is a major victory for families and communities disproportionately impacted by pollution and climate change,” said Aiko Schaefer, Director of Front and Centered, in a news release. “This groundbreaking Senate bill begins to address long-standing inequities and environmental health disparities.”

The task force would give guidance to state agencies on things like how to identify highly impacted communities and the different cumulating factors that impact them, as well as how to best include those communities that haven't had as much of a seat at the decision-making table in the past.

Earlier this year, Front and Centered worked with the state and University of Washington to release an Environmental Health Disparity Map for Washington, which highlights some environmental health data by census tract alongside poverty levels, racial demographics, and disparity. 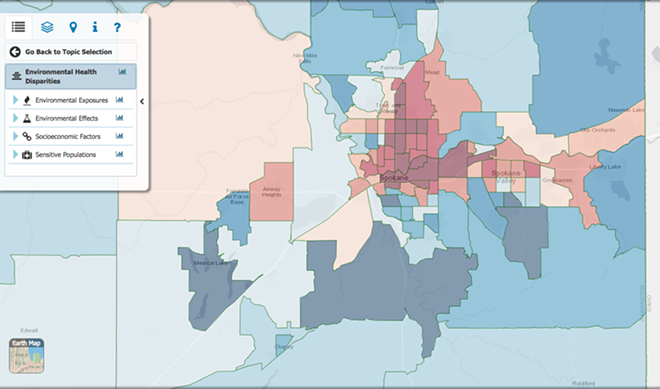 A screengrab of what the Environmental Health Disparity map looks like for Spokane
Similar to a tool that was created in California, the tool and the work of the task force can help the state focus on where investments should be made to prioritize communities that are most impacted by pollution, Twu says.

"The HEAL Act will bring environmental and health agencies together with impacted community stakeholders to determine how to best use the new cumulative impacts data tool to achieve more efficient and coordinated outreach, policy implementation and investments," Sen. Rebecca Saldaña, the prime sponsor of the Senate bill says.