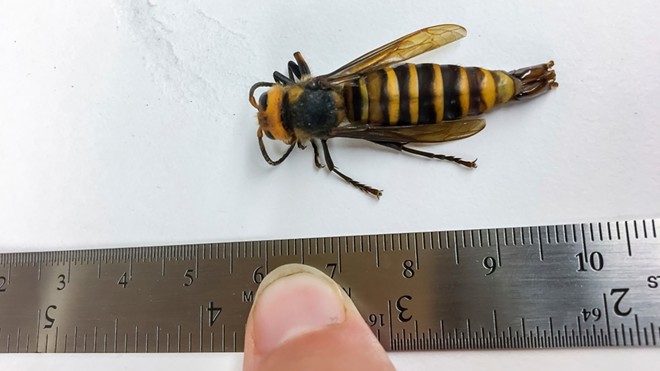 Philip Bovenkamp knew he might have something unusual on his property near Blaine, Washington, when he spotted it recently — flashing by like a dragonfly but “bigger than anything that would come by here.” His suspicions only grew when he heard a low-pitched buzzing sound — first outside, and then again inside his shop, where he had gone to fetch a tool.

“By that time,” he said, “I was convinced I was dealing with a murder hornet.”

Bovenkamp’s discovery last month that there were Asian giant hornets landing on a wasp nest in his shop touched off an effort this week by the Washington State Department of Agriculture to find and destroy their colony before they can decimate honeybees that are critical to the region’s crops, including raspberries and blueberries.

Asian giant hornets, which some researchers call murder hornets, rocketed to entomological notoriety last year after they were discovered for the first time in the United States, in Washington state, prompting officials to issue a pest alert and warn that the hornets pose a threat to honeybees.

At up to 2 inches long, Asian giant hornets are the world’s largest hornets, and they are notorious for using their powerful mandibles to attack and destroy honeybee hives in a matter of hours. With their potent stinger, they can also deliver agonizingly painful venom. In Japan, the hornets kill up to 50 people a year.

In Washington state, the search for the colony near Bovenkamp’s property, which is near the Canadian border and about 30 miles south of Vancouver, has taken on particular urgency because the hornets are about to enter their “slaughter phase,” said Sven Spichiger, a state entomologist. That’s when they attack beehives in force, removing and decapitating every bee inside and then harvesting the brood and pupae for food.

Spichiger said the state Agriculture Department has peppered the area with 30 traps baited with orange juice and rice wine in an effort catch, tag and track a live hornet to the nest. One such attempt has already been unsuccessful.

The state has also set up an emergency hotline for beekeepers to call if a hive is being attacked by Asian giant hornets.

“It is extremely important that they contact us immediately,” Spichiger said. “Make note of what direction the hornets are flying off in so that we can locate the nest and destroy it.”