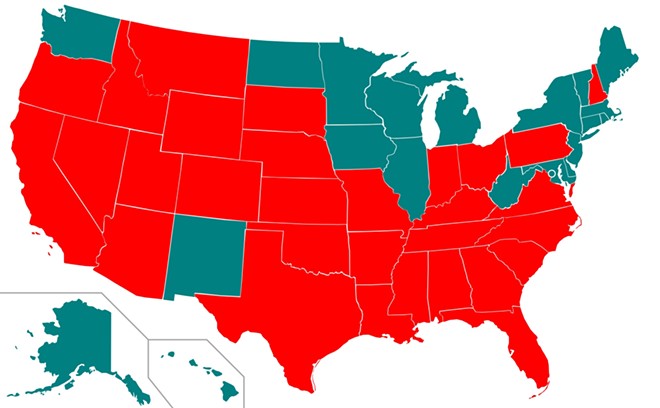 The Washington Supreme Court unanimously struck down the death penalty last week, ruling that it is "imposed in an arbitrary and racially biased manner."

In doing so, Washington becomes the 20th state to end capital punishment. The ruling commuted the sentences of eight men currently on death row to life in prison.

"The death penalty, as administered in our state, fails to serve any legitimate penological goal," the ruling states.

The ruling heavily weighed on a study completed by University of Washington researchers. That study examined the role of race in convictions between 1981 and 2014, finding that jurors in aggravated murder cases are more than five times more likely to impose a death sentence if the defendant is black. The death penalty is also unequally applied according to where and when the crimes took place, and the available budgetary resources at the time, it found.

The finding came from the case of Allen Eugene Gregory, a black man convicted of raping, robbing and killing a woman named Geneine Harshfield in 1996.

Fifteen states have abandoned the death penalty through court order or legislative act in the last 15 years. Washington has not executed anyone since 2010, and in 2014, Washington Gov. Jay Inslee — a one-time supporter of capital punishment — imposed a moratorium on the death penalty. He said last week in a news conference that he would veto any bill that would reinstate the death penalty.

"Today's decision by the state Supreme Court thankfully ends the death penalty in Washington," Inslee says in a statement. "This is a hugely important moment in our pursuit for equal and fair application of justice."

Washington Attorney General Bob Ferguson, who introduced legislation in 2017 to abolish the death penalty, says in a statement he will try again to remove capital punishment from state law, "once and for all." That legislation was stopped in the state House.

"Next session, I will again propose legislation repealing the death penalty, replacing it with life in prison without the possibility of parole," Ferguson says.