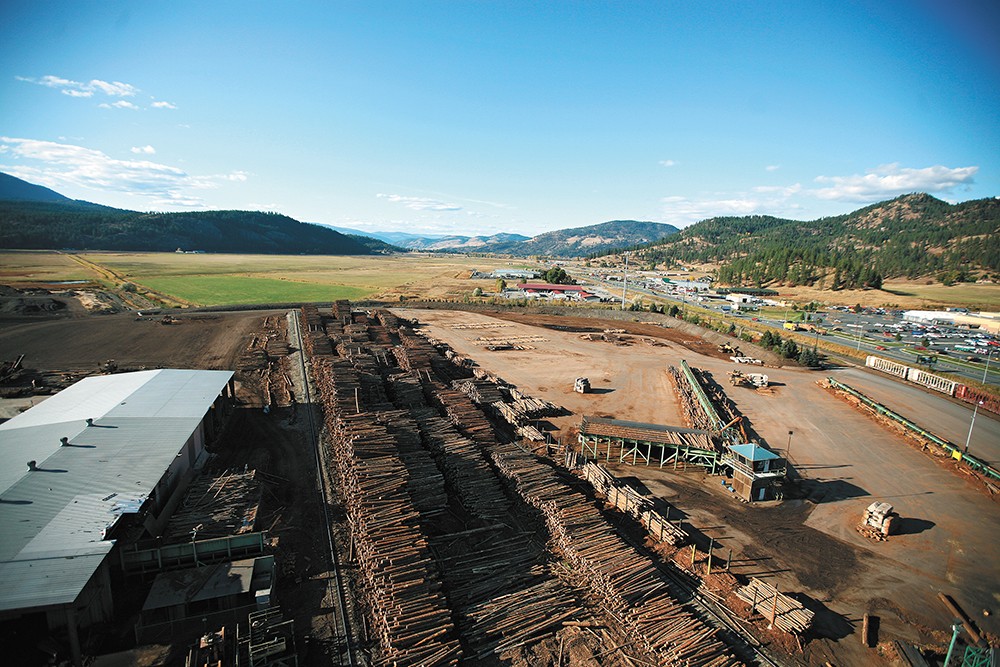 Young Kwak
The Colville-based Vaagen Brothers Lumber company struggled during the recession, but has bounced back thanks to state and federal partnerships, as well as new technologies.

"I believe the Tax Cuts and Jobs Act is the driver of our booming economy," she says.

Meanwhile, to Washington Gov. Jay Inslee, Washington state's crazy-low unemployment rate — with August's 4.5 percent representing the state's "lowest unemployment rate in over four decades" — is evidence that his policies of "supporting a strong workforce" are working.

But both politicians have to contend with the fact that the economic recovery hasn't been a clear triumph for everyone. The three counties north of Spokane still have the worst unemployment rates in the state.

"A lot of jobs were lost during the recession," Brown says. "There wasn't the feeling around the table that there had really been a recovery that maybe the rest of the country is experiencing."

Yet the struggles of northeast Washington aren't something recent: For much of the last few decades, they've been suffering through double-digit unemployment. Even as Spokane County was flourishing in the first half of the 1990s, the neighboring counties to the north were suffering unemployment rates twice as high.

"These three counties up here have [mostly] been economically 37th, 38th, 39th in the rankings of the 39 counties in the state," says Barry Lamont, interim director of the Tri-County Economic Development District in Colville.

As they compete for rural votes in the 5th Congressional District, Brown and McMorris Rodgers have had to reckon with a riddle that's confounded the region for decades: How can we bring the economic boom to northeastern Washington?

There was a time, says Brian Dansel, a former state senator and a former Ferry County commissioner, that the broader northeast Washington region was booming. "There's been more gold taken out of that area than the California and Alaska gold rushes combined," says Dansel.

The region has always been dependent on mining and timber, he explains. But four decades ago, those weren't bad businesses to be in.

"Back in the '80s, we had about 4 percent unemployment in Ferry County," says Dansel.

The thriving mining sector meant that you could make pretty good wages even without a college degree, Dansel says. And all the logging meant that there were enough jobs for nearly everybody.

But then came a barrage of blows to the northeast Washington economy: New regulations complicated mining and logging efforts. Cheap subsidized lumber from Canada flooded the American markets, making it challenging for Washington state to compete. And a flurry of environmental lawsuits — including over protecting the spotted owl — effectively shut off logging access to federal lands.

"My friends in school, their dads lost their jobs," Dansel says.

In 1992, George H.W. Bush gave a speech at Colville-based Vaagen Brothers Lumber, arguing that the pendulum had swung too far in favor of environmentalism.

"When hundreds of mills have been shut down, thousands of timber workers thrown out of work, and revenues for schools and other local services have been slashed, the balance has been lost," Bush said.

And when communities are small, the closure of a big plant is particularly brutal. The Alcoa Magnesium Plant closed in 2001. It couldn't compete with China. The Vaagen Brothers Lumber shuttered a sawmill in Usk, Washington, in 2015; the recession and wildfires made it impossible to keep open. The Kinross Buckhorn gold mine closed in 2017; it basically ran out of gold.

McMorris Rodgers points to actions she's taken to ameliorate some of the impacts — like ensuring timber-dependent counties continue to get federal aid through the Secure Rural Schools act — but she recognizes the problems in northeast Washington are far deeper.

"There is not the infrastructure necessary to attract large-scale manufacturing industrial businesses," McMorris Rodgers says. 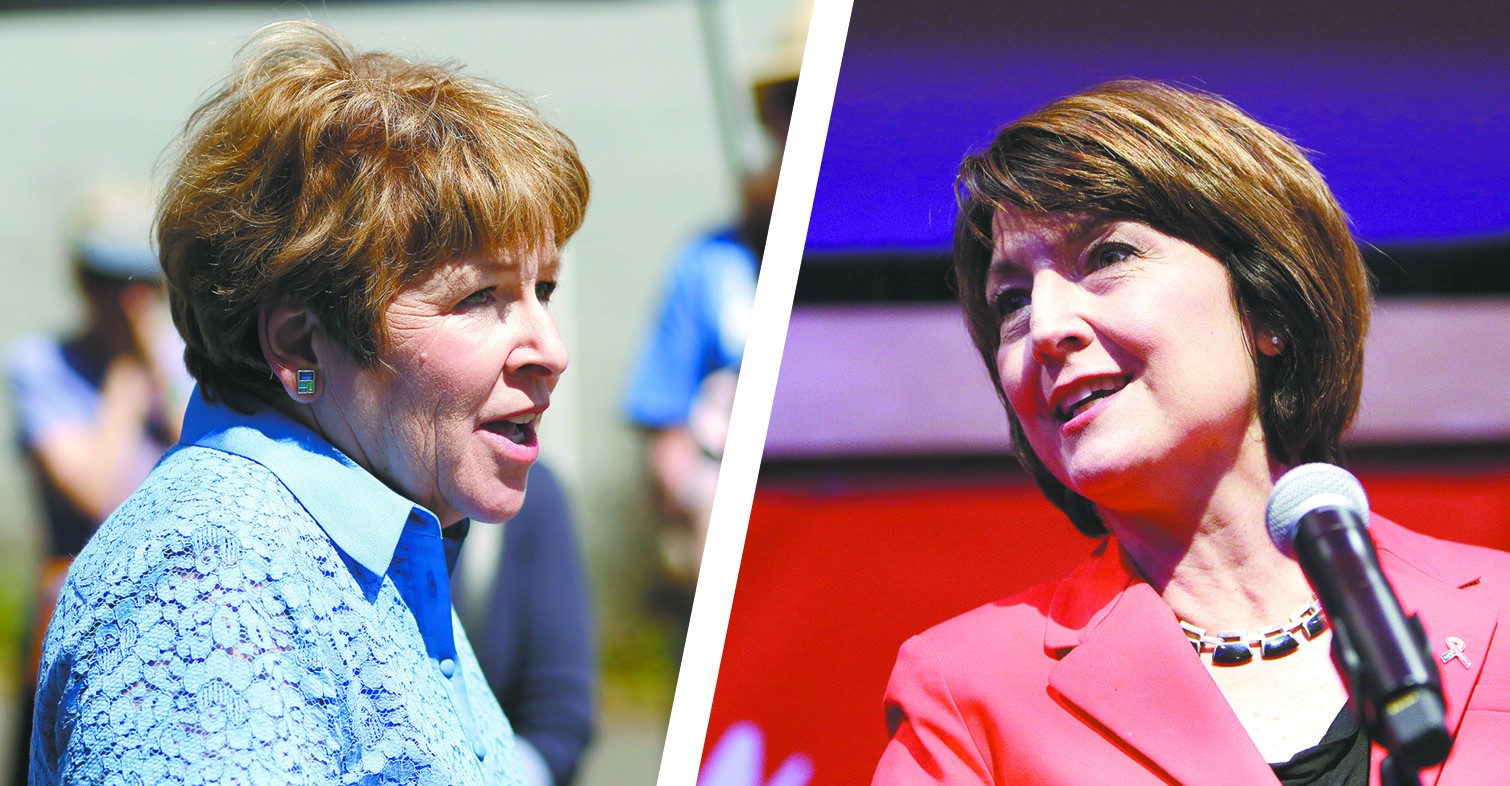 LOGGING ON TO BROADBAND

In the meantime, the economy in the Puget Sound region has continued to boom, driven by technology giants like Microsoft and Amazon. But northeast Washington didn't benefit from any of that. It couldn't. The counties just weren't wired that way — literally.

Lamont, the interim director of the Tri-County Economic Development District, notes that Ferry and much of of Pend Oreille County are so rural they're technically considered "frontier" counties, with 10 or fewer people per square mile.

"You have no airports that can be accessed by UPS or FedEx, even their smaller planes. You have one north-south highway system. You have one east-west highway. You have one rail line," Lamont says. "There is not the infrastructure necessary to attract large-scale manufacturing industrial businesses."

And it lacks one crucial thing in particular: broadband internet. Most of the connectivity outside the U.S. Route 395 corridor are strictly satellite uplinks.

"If you're a business person who needs high-speed broadband, satellite doesn't do it for you," Lamont says. "You're dead in the water."

Bigger businesses don't just need broadband, he says, they need redundancies built in so if one line goes, they're they're still able to operate.

At a town hall with the Spokane Tribe up in Wellpinit, Brown heard that the lack of reliable connectivity was impacting the education system, too.

"The private sector is not incentivized to do it, because that's not where the profits are," Brown says.

The broadband problem is something the state, local and federal governments have spent years trying to fix. While in the state Legislature, Brown says, she pushed for a bill allowing public utility districts to sell broadband in rural areas to businesses. McMorris Rodgers notes that the federal budget she voted for this year includes an additional $625 million more for rural broadband expansion.

McMorris Rodgers repeatedly points to the Republican-led tax cut as the gas that has fueled the current roaring economy. But Brown sees a missed opportunity.

"It just doesn't have a lot to offer rural communities like northeast Washington," Brown says.

Brown argues that instead of simply handing bigger tax breaks to already-thriving corporations, much of that revenue could have gone to a major rural infrastructure investments — the sort that not only added better broadband, but repaired Washington's roads and bridges.

And while McMorris Rodgers defends her tax-cut vote, she agrees that more infrastructure funding is needed.

"We need to move a major infrastructure package for Eastern Washington," McMorris Rodgers says. "I'm committed to making sure that happens."

There's one industry, at least, where there's a lot of good news.

"For decades we were struggling with litigation and burdensome regulations that were making it difficult to do anything on the Colville Forest," McMorris Rodgers says.

But in the last decade, the thinking has shifted to become less adversarial and more cooperative.

With the Mill Creek A-Z Stewardship Project, championed by McMorris Rodgers, Vaagen Brothers Lumber is allowed to selectively log areas of the Colville National Forest, and, in exchange, they use some of those profits to conduct environmental remediation work — improving fish habitats, rehabilitating streams and thinning out areas at risk of wildfire. It's a double-win for employment in the region: Some locals are hired to cut down trees, while others are hired to restore the environment.

Combine these efforts with cross-laminated timber — a recent innovation that allows thinner trees to be built into bigger buildings — and there's a lot of good news for the timber industry. In Kettle Falls, McMorris Rodgers says, Boise Cascade has so many jobs they can't hire people fast enough.

"They have a skilled labor shortage," McMorris Rodgers says. "What happens on the Colville National Forest drives the economy."

Brown is enthusiastic about the collaborations around the forests as well. And she sees other possibilities for public lands, not just for sustainable logging but for recreation — for hiking, fishing and camping.

That's not to say that there aren't tensions between business and the environmental interests elsewhere: The potential PacWest Silicon smelter plant south of Newport promises 150 permanent jobs — but also sparked opposition from the Kalispel Tribe and litigation from an environmental group.

For years, McMorris Rodgers, like most Republicans, has won the vast majority of votes in rural regions — and she points to her legislative record as one reason why. But Brown continues to argue that McMorris Rodgers' voting record, such as her vote to dismantle the Affordable Care Act, has put rural and low-income regions in peril.

Beyond aesthetics and visual appeal, the arts are a powerful economic driver at local, state and national levels

Under Donald Trump, America is experimenting with discredited economic theories