The Washington Supreme Court issued the long-awaited ruling on Thursday 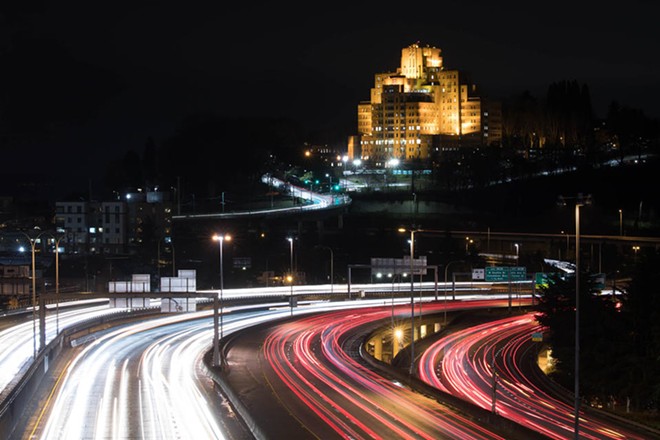 Matt M. McKnight/Crosscut photo
An evening view of the Pacific Tower on Beacon Hill, Seattle, with traffic on Interstate 5 traveling the highway.

For the third time in state history, a measure promising to cut car-tab taxes to $30 a year has been blocked by Washington state courts.

On Thursday, the state Supreme Court struck down Initiative 976, a measure Washington voters approved last November to reduce the cost of annual vehicle licensing fees. The measure has been on hold for nearly a year, as legal challenges worked their way through the court system.

In a unanimous ruling, the state’s high court said the measure was unconstitutional because it combined more than one subject in one initiative, something the state constitution forbids. Eight of the court's nine justices also said the initiative had a misleading title, striking it down on that basis as well.

The Supreme Court ruling is the end of the road for I-976, which was the brainchild of anti-tax activist Tim Eyman. One of Eyman’s main targets with the initiative was Sound Transit, which is building a regional light rail network paid for in part by higher car-tab fees. A majority of Puget Sound voters approved that transit expansion, and the increased fees, in 2016.

State officials had estimated I-976 would cause state and local governments to lose about $4.2 billion in revenue for transportation and transit projects over the next six years.  The initiative passed anyway, winning 53% of the vote in November 2019.

Eyman had previously proposed two other measures to cut car-tab fees, each of which was similarly thrown out or partially blocked by the courts.

The majority also said I-976’s ballot title gave voters the false impression that voter-approved car-tab taxes would be untouched by the initiative, when in fact the measure repealed those taxes as well.

“The average informed lay voter would conclude voter approved taxes — such as  those used to fund local and regional transportation projects across our  state — would remain,” Justice Steven González wrote in the majority opinion.

Eyman, the initiative sponsor, said he would keep fighting for lower car-tab fees, as he has for the past two decades. But he urged lawmakers to pass car-tab relief on their own, as they did previously after one of Eyman’s other $30 car-tab measures was struck down by the court.

“It shouldn't take another initiative — it should take responsible leaders,” said Eyman, who urged Gov. Jay Inslee to call the Legislature into an immediate special session to respond to the court’s ruling.

Inslee said he was open to working with legislators to make changes to how the state collects car-tab fees going forward, but stopped short of promising an emergency session to address the issue.

Justin Leighton, the executive director of the Washington State Transit Association, said Thursday’s ruling will help prevent cuts to bus routes that many essential workers rely on to get to their jobs. Older adults and disabled people who rely on access to transit to maintain their independence will similarly benefit from the ruling, said Leighton, whose organization was one of the lead plaintiffs in the lawsuit challenging I-976.

The decision will also give state legislators a bit of a reprieve next year. I-976 was projected to reduce the state transportation budget by about $650 million in the 2021-23 budget cycle. Most of that money was expected to be spent on transit and nonroad projects.

Earlier this year, lawmakers addressed the transportation budget problem mostly with one-time fixes, such as transferring money between accounts, rather than making deep cuts. Before taking more drastic action, they wanted to wait for the court’s ruling on whether the initiative was valid.

Now, as they grapple with the economic fallout from a global pandemic, high unemployment and the closure of businesses, I-976 is one less thing they have to worry about.

Local officials, too, will benefit from Thursday’s ruling. About 60 cities and counties charge their own local car-tab fees to pay for road projects and other transportation needs. Many of those fee increases were approved by voters.

I-976 would have wiped out those local taxes, reducing local transportation spending by about $60 million per year.

Many cities said they kept collecting car-tab revenues while I-976 was on hold, but set the money aside rather than spending it while they awaited the final ruling on the initiative.

The state took similar precautions while the initiative’s fate was up in the air.

State Rep. Jake Fey, a Tacoma Democrat who chairs the House Transportation Committee, said “It’s great to have the Supreme Court understand the problems with another Eyman initiative that was badly written.” He said I-976 “threw everything but the kitchen sink into a ballot issue and misled the public once again.”

“It’s good they recognized that,” Fey said. In addition to cutting car-tab fees, I-976 also would have eliminated a 0.3% sales tax charged on vehicle sales.

But even with I-976 out of the picture, the state doesn’t have enough money to meet all its transportation needs, Fey said.

He and other lawmakers plan to propose a new transportation tax package next year to help pay for ferry upgrades, as well as a court order requiring the state to remove and replace culverts that block fish migration. Those culvert replacements alone are expected to cost hundreds of millions of dollars in the coming years.

The state is also trying to find a way to pay for a new bridge over the Columbia River at Interstate 5 in Vancouver.

Key Republicans, who are in the minority in the Legislature, agreed with Eyman that lawmakers should go ahead and enact the car-tab cuts voters approved under I-976, despite Thursday’s court ruling.

In a written statement Thursday, State Sen. Steve O’Ban, R-Tacoma, said enacting the cuts at the legislative level is the only way to uphold the will of the voters.

“If we fail to act, voters will believe — and who can blame them? — that the government doesn’t care and doesn’t listen to them after they have clearly spoken through the initiative process,” O’Ban’s statement said.

Hobbs, who chairs the Senate Transportation Committee, said the state’s lingering budget problems make that a bad idea. He said the state transportation budget now is projected to lose another $500 million or so in the next two years because of the economic effects of the COVID-19 pandemic.

While highway projects are largely paid for by using income from the state gas tax, the state constitution prohibits gas-tax money from going toward public transit and other nonroad projects. That’s largely why legislators have leaned on car-tab revenues to pay for those things.

Fey and Hobbs said it’s clear that voters are unhappy with car-tab fees as a means to pay for transit and transportation. Because of that, legislators should look at alternative ways of raising money going forward, they said.

It wasn’t immediately clear what those options might be.

“We’ve got to find a way to have a more stable funding source,” Fey said. “All options are on the table.”

This story has been updated with additional context and reaction to the ruling.