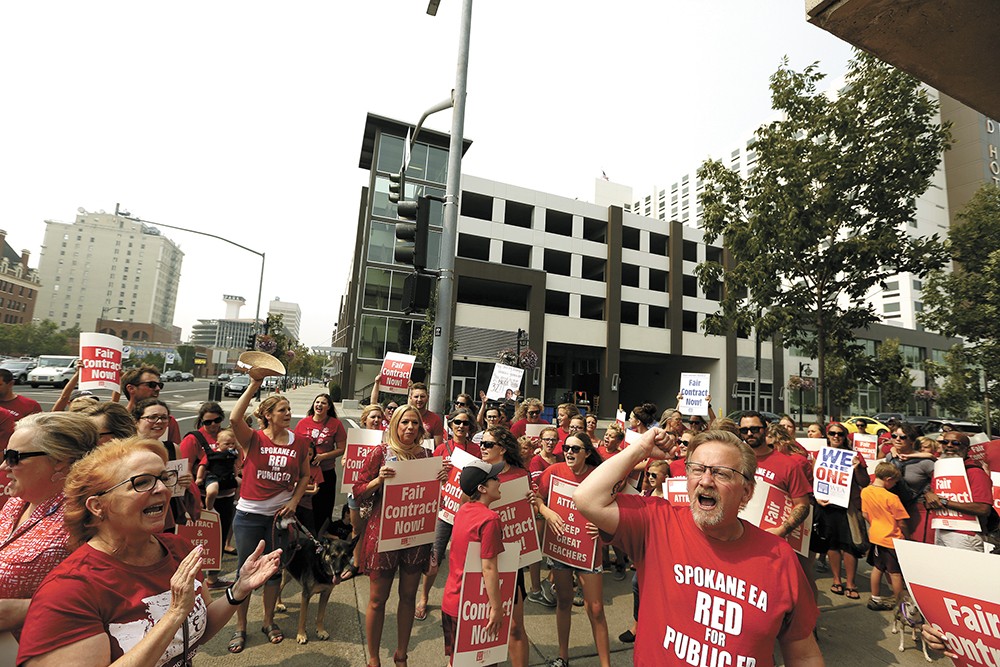 Young Kwak
Spokane teachers picketed outside the district office last week, calling for a raise in advance of contract negotiations.

In spring, the state Legislature pumped $1 billion into education, finally ending the McCleary court case, which had dogged the Legislature for not spending enough on schools.

It was time for teachers to get a raise. And Henry, two weeks ago, thought early meetings went well.

"We feel like we're in a good spot," Henry said.

Days later, that feeling abruptly changed. By Wednesday, Aug. 22, Spokane educators were rallying outside the district office. Chants echoed off downtown buildings. Hundreds of teachers wearing red shirts formed a crowd that overflowed onto the street. They held signs demanding a pay increase beyond what was being offered.

"It is time for Spokane Public Schools to keep the McCleary promise and provide professional pay for classified and certified educators," Henry said that night.

As of press time Tuesday, Spokane teachers were still negotiating with the district for a pay raise. But around the state, similar scenes of rallies and protests are taking place. As they clamor for a raise, teachers in more than 200 districts have yet to work out a deal with their local administrations. And it's playing out differently everywhere. In one night, Mead teachers agree on a new contract, while hours later — and hundreds of miles away — a district on the west side votes to strike.

So how did we get here?

Mostly, it's confusion created by the interpretation of the state's McCleary deal. District administrators and unions can't agree what the McCleary money is intended for, and what districts can afford. Districts say what unions are asking for is unsustainable for long-term financial health. But unions say the influx of money was always meant for teachers, seeing it as a once-in-a-generation opportunity for teachers to get what they deserve.

"If they don't do it now," Rich Wood, spokesman for the Washington Education Association, says of the pay bumps, "then when are they going to?"

A few dozen school districts in Washington have already negotiated big pay increases — anywhere from 10 percent to 30 percent raises. So far, those have been in line with the 15 percent average pay bump that the Washington Education Association had in mind for teachers.

The reason the rest of the school districts haven't come to an agreement varies. Some school districts have argued they legally can't give a raise above 3.1 percent, based on their interpretation of a bill passed recently. Yet as the state's Superintendent of Public Instruction Chris Reykdal says in a letter to district superintendents, the language of that is ambiguous. In OSPI's view, there is no 3.1 percent cap.

"We do not believe salary increases are limited to 3.1 percent," Reykdal says.

That's not to say districts don't have other concerns with significantly increasing teacher pay.

But school districts are hesitating. This year's extra money is somewhat of an anomaly, a one-time surplus. While the Legislature pumped more state money into schools, it capped the amount school districts could collect from local levies, starting next year. That means school districts can't necessarily plan for the kind of money they have on hand this year.

In the next two years, Spokane will see a drop in local levy funding of around $44 million, says district spokesman Brian Coddington.

In fact, Washington will see a net decrease in funding in 2019 overall, says OSPI spokesman Nathan Olson. The state solved the McCleary problem by reducing local districts' reliance on local levies. But for many districts, it means the same or less cash.

And no two district are impacted in precisely the same way. OSPI says certain districts will have it worse than others. Those districts, according to OSPI, typically have one of four qualities: 1) they already pay salaries near the state average, 2) they pay more for certificated staff than they were given by the state, 3) they didn't get a pay bump for having experienced teachers, and 4) they're losing 50 percent or more of their local levy capacity next year.

Spokane meets all four criteria. And it was a sticking point in negotiations for pay raises.

"The district is concerned about making commitments that are not sustainable beyond the present year," Coddington says.

On Sunday, the superintendents from Spokane, Central Valley, East Valley and West Valley penned a guest editorial to the Spokesman-Review outlining their concerns about funding.

Teachers, however, dismiss the arguments as "excuses" for not paying them what they deserve.

"Despite their claims, all four school districts have the money to provide much-needed pay raises so we can continue attracting and keeping great teachers and staff for our students," the SEA writes on its blog.

Wally Watson, president of the Central Valley Education Association, says Central Valley schools have received roughly $6.2 million in McCleary money. All of that, and more, should go to teachers, he says.

He knows districts might get less money next year because of the levies dropping off, but he doesn't think that should be a reason not to pay teachers. Reykdal, the state superintendent, has said he will push the Legislature to address the challenges certain districts face because of the new funding deal.

"It's possible the state will make up for that," Watson says.

Nine local unions have all worked together to put pressure on their districts. Of those, East Valley and Mead were the first to ratify agreements on Monday. Mead's contract includes a 16 percent increase for a beginning teacher's salary. That, Watson says, could open up negotiations for the rest of the districts in Spokane County.

One thing's for sure: The unions in Washington will hold firm, Wood says. Sure, each district is in a different situation, he says, but they should figure it out and pay teachers what they deserve.

"At this point," Wood says, "there shouldn't be any confusion." ♦