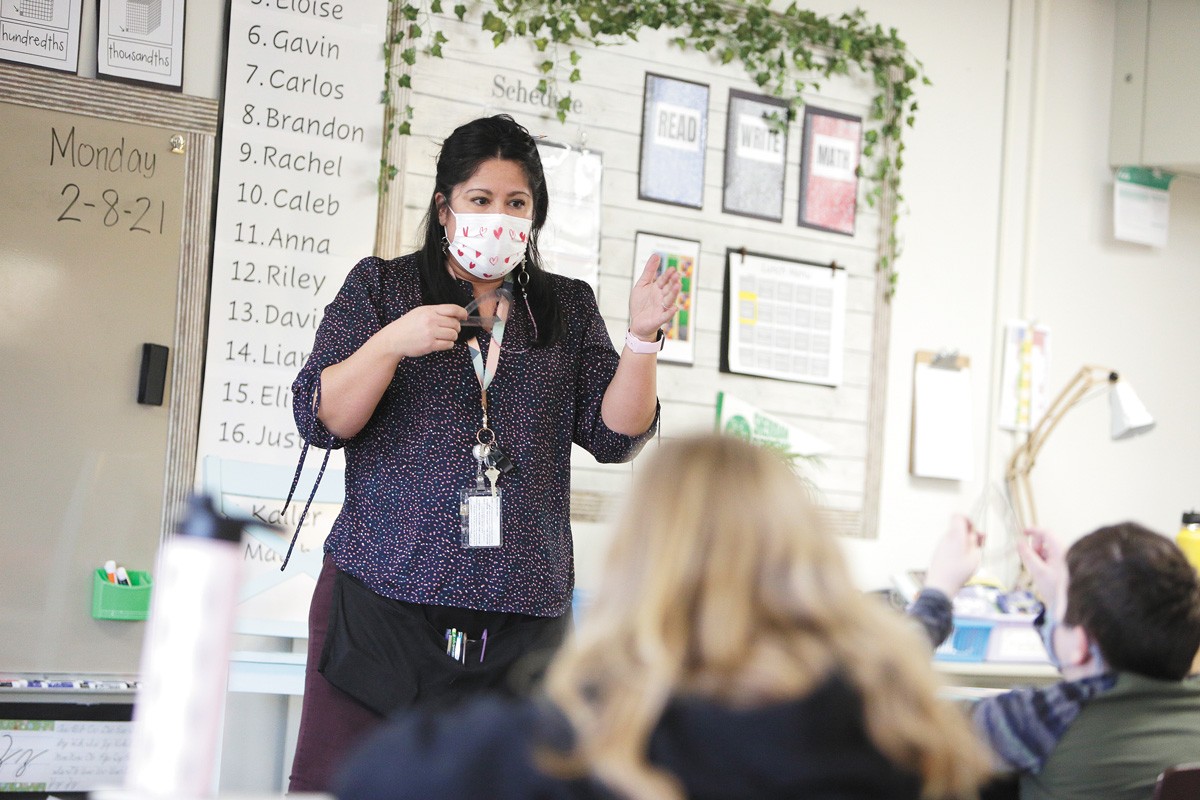 It's become a rallying cry uniting parents and celebrities, Democrats and Republicans. As the COVID-19 pandemic continues, and many schools are nearing the one-year mark of closing to in-person instruction, there's seemingly universal support for vaccinating educators as soon as possible so schools can be open safely.

So why hasn't Washington — and Gov. Jay Inslee — prioritized COVID-19 vaccines for teachers yet?

Inslee says it comes down to a lack of supply.

But Inslee and the state Department of Health have been bombarded with opposition to this stance from seemingly all sides. Teachers unions, the state superintendent of public instruction and lawmakers from everywhere on the political spectrum have voiced their displeasure with Inslee's not prioritizing teachers for vaccines first. After all, both Idaho and Oregon, despite their contrasting state politics, have prioritized teachers and made them eligible before older, more vulnerable populations.

In Washington, some older teachers may be eligible for a vaccine, but most are left wondering when it will be their turn.

"I talked to an educator in Clarkston who said, 'I can cross the river into Lewiston, and if I were working there I'd be vaccinated. Or if I worked a little farther south in Oregon, I'd be vaccinated,'" Delaney tells the Inlander. "'But here [in Washington], I can't.'"

But here's the thing: With a limited supply of vaccine doses, as Inslee has repeatedly pointed out, prioritizing one group of people may mean another group has to wait longer. As an example, while Idaho and Oregon vaccinated teachers, they have been slower to inoculate older citizens who are 65 and older, a population that accounts for 80 percent of all COVID-19 related deaths. Idaho has been one of the slowest states to vaccinate its citizens overall.

While the call to vaccinate teachers sounds like a no-brainer on its face, it raises a number of ethical questions that the loudest advocates for teachers have a hard time answering.

Support for letting teachers cut the vaccine line stems largely from two beliefs: that students need to return to school, and also that school buildings would be unsafe for teachers if they were allowed to do so without a vaccine.

Inslee has argued that schools should be safe enough for students to return with or without a vaccine. But Delaney isn't so sure. In a letter to Inslee last month, he wrote that "students and educators who are in school buildings now are at risk," citing a lack of testing and contract-tracing resources.

"It is puzzling and frustrating that you are pushing to expand in-person education without having solid science to back your decision," Delaney wrote.

Delaney hasn't said that every teacher needs to be vaccinated in order to return to school. Schools can reopen safely, he says, but many need more resources to do so. What he wishes is that Inslee would advocate for teachers getting vaccinated as vociferously as he does bringing them back to school.

"We're advocating for doing everything we can to minimize the risks," Delaney says. "Adding the vaccine is just another layer of protection that can certainly give educators peace of mind but also work to protect the students and the families that those students go home to."

Chris Reykdal, the state superintendent of public instruction, wrote his own letter last month, asking Inslee to reconsider his vaccination plan in order to "expedite school reopening across the state." Though Reykdal says widespread vaccination is not required to reopen schools, he says the current vaccine schedule will create "the unintended consequence" of vaccinating parents and guardians who still could not return to work because, without schools open, their kids would need support at home.

Yet study after study indicates that opening school buildings isn't as dangerous as public health experts feared it would be last summer, when many school districts decided to start the year with remote learning. The Centers for Disease Control and Prevention said last month that, based on the "preponderance of available evidence," the benefits of opening schools outweigh the risks of further remote instruction. It came with a caveat: There needed to be adequate masking, distancing and ventilation measures taken. 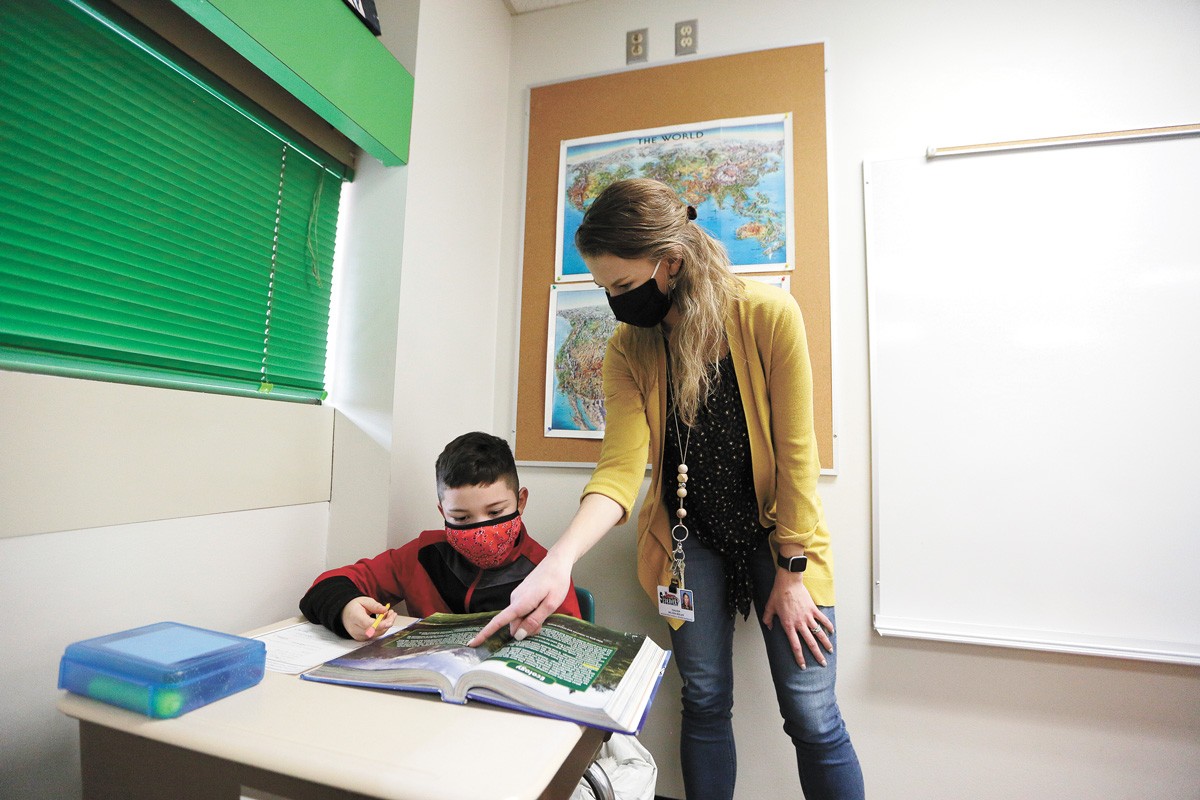 Another study published in the journal Pediatrics, examining 11 North Carolina school districts over two months, came to the same conclusion, finding no recorded instances of child-to-adult transmission. Research from the Institute for Disease Modeling in Seattle found similar results from data collected in Washington schools. And a recent study published in the CDC's Morbidity and Mortality Weekly Report that looked at 17 Wisconsin schools found that when mask-wearing among students was high, COVID-19 incidence can be lower in schools than in the community overall.

All of this seems to fit generally with the data from schools that have opened for in-person instruction in the Inland Northwest. The Spokane Regional Health District has repeatedly reported low transmission of COVID-19 in schools. Students and staff may bring disease into the school, but it doesn't seem to spread inside the school building frequently. Coeur d'Alene Public Schools — where community spread has been high — reports that 10 percent of its cases have come from in-school transmission, though the district isn't clear on where some other cases originated.

Inslee cited much of this research in his letter responding to Delaney on Feb. 2. It should be noted, however, that this research doesn't take into account new, potentially more contagious variants.

"I am most hopeful that this data and research can give your members additional confidence to be able to return to on-site learning," Inslee wrote to Delaney.

The Spokane Education Association, meanwhile, is already on board with teachers going back to school, regardless of the vaccine schedule. By March 1, middle and high school students will be on a hybrid model, attending school in-person part of the time and attending remotely the rest. Jeremy Shay, SEA president, says the union is OK with it as long as health officials say it's safe.

"We've always said we would follow the recommendations of the Spokane Regional Health District," Shay says. "We're currently on that path and trust the health district is considering all those factors and sending us back to buildings that are safe, and that all the protocols are being followed."

So for many schools, getting a vaccine isn't tied to returning to in-person instruction. And there's another problem: Even if all teachers were vaccinated, it wouldn't necessarily guarantee that they'd want to return to school.

In Oregon, one teachers union head told Willamette Week that getting a vaccine puts teachers in a "very difficult position," since they are expected to return to school before they feel it's safe to do so. By prioritizing teachers, older and more vulnerable seniors who live with students may remain at risk.

WHO WOULD THEY BUMP OUT OF LINE?

Beyond whether vaccines would allow all students to get back in school, there's still the matter of the lack of supply. Inslee argues that if you give a 25-year-old teacher a vaccine now, with supply limited, then that teacher's 80-year-old grandmother doesn't get it.


But Delaney doesn't exactly see it that way.

"Are we advocating for that 25-year-old teacher to bump the 80-year-old person out of the line? No. But we believe they should be in the same line together," he says.

Delaney says other essential workers, like grocery store workers, should also be in that line. He doesn't have an answer for how that would work, however, without bumping seniors out of it.

Politicians advocating for teachers to jump the line don't explain how they'd prevent seniors from being bumped out either. Four members of the state Legislature — Democratic Sen. Lisa Wellman and Rep. Sharon Tomiko Santos, along with Republicans Sen. Brad Hawkins and Rep. Alex Ybarra — signed a letter asking Inslee to have educators "equally prioritized with older Washingtonians." The letter didn't expand on how to prioritize with a low vaccine supply.

Republican Rep. Skyler Rude, R-Walla Walla, was a cosponsor of a bipartisan bill — supported by the Washington Education Association — to move teachers up the vaccine line. When asked how he would avoid a young teacher cutting in front of an elderly citizen, Rude says it's a great question, and that maybe there should be some flexibility so local jurisdictions can make those decisions.

Mike Faulk, a spokesman for Inslee, tells the Inlander it wouldn't be practical to open up eligibility to all essential workers and those 65 and older.

"We don't have enough supply to even match the number of people in Washington currently eligible to receive a dose of vaccine," Faulk says. "Meanwhile there have been documented issues of older individuals in Oregon trying to get vaccinated in Washington because they are not prioritized the same in their own state."

Delaney knows which side he's on.