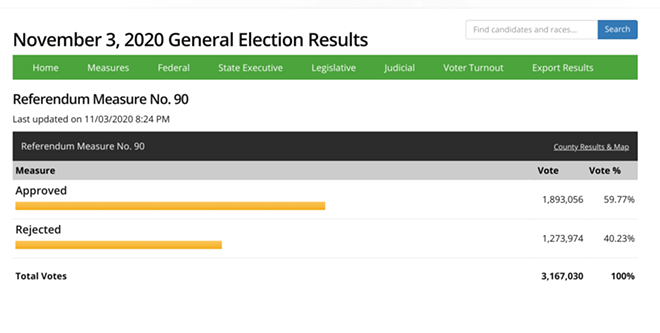 Early vote totals as reported to the Washington Secretary of State's office by 8:24 pm, Tuesday, Nov. 3.

With a nearly 60 percent approval (59.77%) among the more than 3.167 million votes that had been counted and reported statewide as of 9 pm Tuesday, Washington voters appeared to approve Referendum 90.

The measure enacts an earlier move by the Washington State Legislature to pass Senate Bill 5395 earlier this year to expand comprehensive sexual education in public schools.

Following the early count, multiple groups that supported the measure posted online with cheers of victory, among them ACLU of Washington, which tweeted "VICTORY FOR WA YOUTH! R90 PASSES!"

All districts must include lessons on the following seven bullet points:
1) The physiological, psychological and sociological developmental process
2) Developing the skills to communicate respectfully and effectively, and to choose healthy behaviors and relationships based on mutual respect and affection, free from violence, coercion and intimidation
3) Health care and prevention resources
4) Abstinence and other methods of preventing unintended pregnancy and sexually transmitted diseases
5) Developing meaningful relationships and avoiding exploitative relationships
6) Understanding the influences of family, peers, community and the media on healthy sexual relationships
7) Affirmative consent and responding safely and effectively when violence or a risk of violence may be present, with strategies that include bystander training.

Districts will still be able to choose the curricula they use to teach students, and parents can still opt their child out of the lessons.