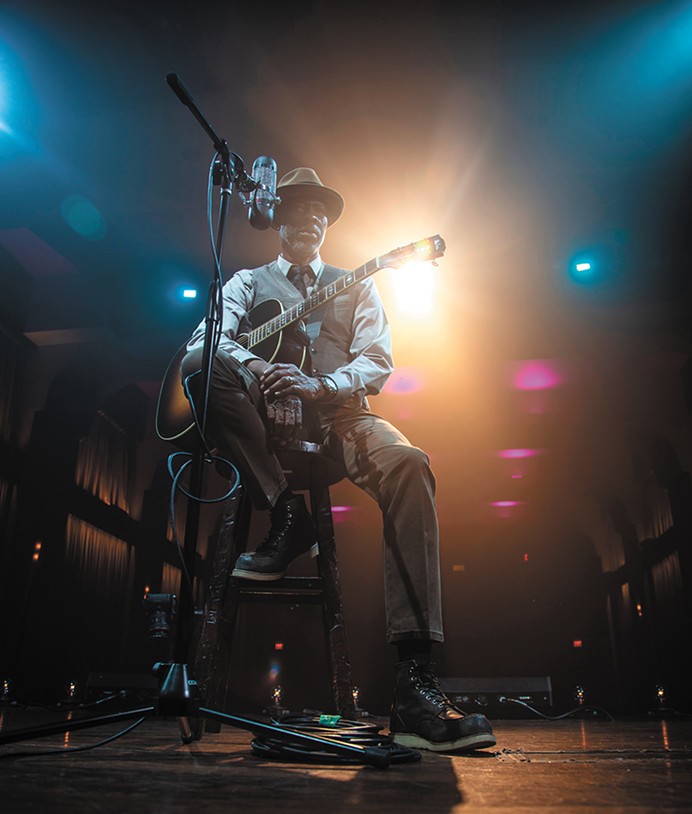 You could say Keb' Mo' is a blues player. What's more, you could say he's widely recognized as a master of the art form and point to his 14 albums and four Grammy Awards — most recently Best Contemporary Blues Album for TajMo (2017), his collaboration with Taj Mahal.

You could also say he's living proof of Americana's burgeoning inclusivity and one of the genre's foremost black spokesmen, and that he's helping roots music push past its narrow definition as 1970s-influenced country-rock. (You know, music played by white people in flannel, for white people in flannel.) In an interview with Rolling Stone, Keb' Mo' said he'd like the format to include elements of jazz and even hip-hop, for it to be "just purely about music and no categories." So you could say he's something of a visionary, as well.

But none of that adequately conveys the depth of his expression in his music, or the way his voice, both time-worn and timeless, transports listeners to a screen porch somewhere in the deep South. Or that he's an astonishingly smooth guitar picker with sneaky old guy chops and an easy onstage charisma. You really just have to hear and see him for yourself.

And I'm here to help. I've put together a list of five songs to get you pumped and primed for Keb' Mo's upcoming solo show, so listen up.

This album represented a shift away from Keb' Mo's Delta blues style to a more expansive, rock-based sound. The title track is a somber acoustic blues-pop song originally featuring guest artists Jackson Browne and Bonnie Raitt, and it's been a mainstay in Keb' Mo's sets for more than two decades. The message of equality is plain to hear, especially when he delivers the line, "And under my skin / I'm just like you," but somehow it still bears repeating in 2018.

This muddy blues joint features everything you could possibly want: A walking bassline set to mosey, vibrato-effected guitar, and lyrics about overdue credit card bills, disastrous tax returns and not paying your bartender for drinks. Don't worry, Keb' Mo' is good for it. Right? ... Keb'?

This short and sweet wade through the Delta swamp clocks in under three minutes. It's also a prime example of Keb' Mo's storytelling, as our hero struggles to scrape together enough money to take his sweetheart to France. He's still making payments on her wedding ring, see, and of course asking his boss for a raise doesn't work — not with the global, bipartisan oligarchy keeping all of us down. (OK, I added that last part.) Ultimately, he finds a couple of cheap tickets on the internet and concludes, "I said, 'Ain't nothing wrong with Texas / But you and I are going to France.'" Here, here.

Some say people get better with age. Not Keb' Mo', though. On this New Orleans street party of a song with a raucous brass section, he laments the loss of his younger self and his formerly wild ways: "Well I'd sleep all day, party all night / Did whatever I wanted, whatever I liked / You made me a brand new man, but I liked the old me better."

The final song on Keb' Mo's ninth studio album is one of his better-known numbers, and for good reason — it's basically distilled bittersweetness designed to tug your heartstrings all the way out. It's inspiring and nostalgic from the moment he begins the exquisitely simple fingerpicking pattern, and it would be difficult not to feel the heartfelt positivity of lyrics such as, "Life is beautiful, life is wonderous / Every star above shining just for us."

But the real gut-wrencher comes in the second verse, when he sings: "I get crazy, so afraid / That I might lose you some fine day / And I'll be nothing but a tired old man / And I don't wanna be without you at the party."

The original print version of this article was headlined "Blues & Roots"