We Cover the Streets

Ciclovía has finally arrived in Spokane — at least for two days. 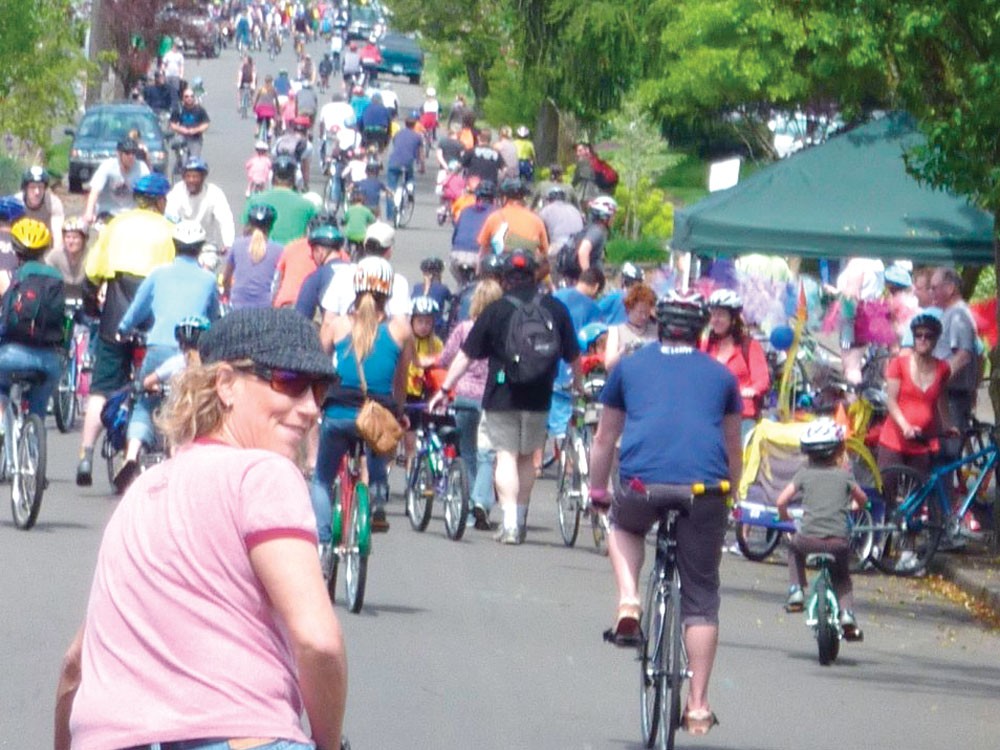 Heleen Dewey leans over a broad table in the situation room at an undisclosed building on Monroe Street. She sweeps an arm over an annotated 2-foot-long laminated map of Spokane’s near-north side, motioning toward the corner of Mallon and Howard, near Riverfront Park’s enormous butterfly installation. This is where she’ll station the Malidoma Drum & Dance corps. They’ll pair with Otto, the ambiguous mascot of the Spokane Indians. Here? This is the position for an elite squad of t’ai chi masters.

Dewey isn’t planning a tactical siege on the Spokane Arena, but for the level of strategy and organization involved, she might as well be.

In fact, Dewey is in charge of scheduling and assigning vendors for the first-ever Summer Parkway, a 1.3-mile-long block party that will extend from Riverfront Park to Corbin Park, along Howard Street, on Sunday.

The event, which is organized under the aegis of Spokefest, will close down motorized traffic on Howard from 9 am to 1 pm, creating a long, narrow strip in which the public can do … pretty much whatever they want. Bike, rollerblade, skateboard. Get a tennis lesson. Grab some fresh produce from the PEACH tent. Register their bikes with the cops. Decorate their bikes in Corbin Park. Try out a tandem.

The idea, which has been bandied about in Spokane cycling circles for years, was born in 1974 in Bogotá, Colombia, where the city shut down certain downtown streets to motorized traffic as a means to reduce congestion and pollution. Just one time, at first. Then another. Over 35 years later, Bogotá closes certain streets every single Sunday (drawing up to two million people each time), and the ciclovía idea has spread to 12 countries, from Chile to Mexico to Canada. At least a dozen cities in the U.S. have experimented with the idea, including Portland, Chicago and Tucson.

Bill Bender, the head of Spokefest and the co-chair of the Summer Parkways event, points back to the Bogotá example — specifically to a popular video that documents the ciclovía idea there.

“A number of us have been smitten by this thing,” he says. “By the clear appeal to any city anywhere.”

Bender took the idea to the environmental advocacy group the Lands Council, then to the City of Spokane, where he found a mayor and a city administrator who were amenable to the idea. (City Administrator Ted Danek has seen ciclovías first-hand in South America, Bender says.)

“We had looked at the model that had been used in a couple of U.S. cities, where it was a partnership between a city and some bicycling or human-powered movement advocacy group,” he says. “We presented that model to the mayor and her staff and they liked it.”

Of course, Spokane is no Bogotá, and neither will its Summer Parkways be a proper ciclovía (at least not at first). Given the normally light traffic on Howard Street, pretty much every day is a breeze for cyclists and pedestrians. Part of the apparent thrill of the Bogotá event, on the other hand, is the stark contrast between the weekdays, when downtown streets are clogged with city traffic, and Sundays, when they are utterly transformed by walkers, strollers, bikers and other revelers.

Spokane delights in that contrast during Hoopfest and Bloomsday, but these two precedents were also impediments for the Summer Parkways idea. Bender says early discussions centered around using an east-west street downtown and going all the way to Browne’s Addition. Or at least extending the Howard Street closure through the park, across downtown and up to Lewis and Clark High School.

But Bender says that those plans concerned downtown businesses, which he says maintain a love-hate relationship with the street closures brought by Hoopfest and Bloomsday. “They recognize that [these events] are a tremendous asset to the city, but the merchants are not necessarily always pleased with that.”

Thus, the Howard Street route, which is relatively flat (encouraging kids and casual cyclists to participate) and connects two parks (a biggie in ciclovía strategy).

Bender and a small army of volunteer staff and day-of volunteers will see how it goes on Sunday, then they’ll repeat the performance in a second installment of Summer Parkways on Aug. 22. If all goes well, they’ll look to expand it next year — maybe to different routes, maybe shuffling from neighborhood to neighborhood each time, as some cities have done.

Whatever the case, Bender believes the formula of closed streets and sunny days is already a winner. “It’s like an instant product where it says just add water,” he says. “We just need to add people.”

The first of two Summer Parkways takes place on Howard Street between Riverfront Park and Corbin Park between 9 am and 1 pm on Sunday, July 11. Free. Visit http://www.summerparkways.com.