"We Kinda Need A Mexican"

Behind the scenes at the Hispanic Food Network 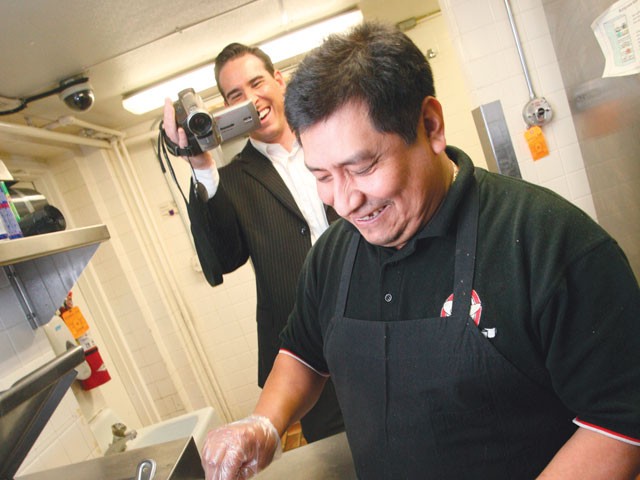 "I don’t usually shoot, but,” Mike Gonzalez says, pausing mid sentence to fiddle with a small hand-held HD video camera, “everybody is either dead or on vacation today.”

The KXLY morning show host — accustomed to support from a co-anchor, producers, camera operators and a reporter — is flying solo for the moment. It’s just him, the camera, and a cook named Steve in the kitchen shared by DeLeon’s Mexican Deli and sports bar Heroes & Legends.

The usual cameraman, Al Martinez, is on vacation. The backup, Dwight Finney (whose official titles are executive producer, editor and partner), is “ deathly sick” with what Gonzalez fears might be swine fl u or bubonic plague or something. It’s a bad situation all around, but these Mexican pizzas won’t shoot themselves, so here stands Gonzalez, still done up in TV news couture — a well-tailored dark-gray striped suit with hints of makeup ringing his stiff white collar — ready to shoot some B-roll of the process.

“We do what we have to do to get the job done,” he says with good-natured resignation.

There’s another problem, though. The show Gonzalez is shooting, En La Cocina, is the flagship show of his brainchild, the Hispanic Food Network. Steve, the cook, isn’t any kind of Hispanic. He’s actually quite white.

These are the travails of low-budget television production.

Roughly nine months ago, Gonzalez began the Hispanic Food Network, along with partners Dwight Finney and Louie Flores III. It’s been a long, slow road to get here. The trio scored an early success, pitching the show to managers at KXLY 4, where Gonzalez and Finney work. “They said they’d run the show if we made it,” Gonzalez recalls, “I assumed we were set. I assumed they’d let us use all the equipment,” the cameras, the lights. He assumed wrong.

With no help from KXLY, the partners have had to produce En La Cocina all out-of-pocket — so, for now, it’s all micro-budget.

There are no proper offices for the Hispanic Food Network. Gonzalez does much of the back-and-forth with his PR person via text message on a bright green cell phone. Flores, HFN’s third partner, totes around a big laptop computer. Finney edits everything in his Coeur d’Alene basement, or, in one case, in the car on the way to Tri-Cities while Flores drove. The cooking segments are shot at Greenstone Homes’ test kitchen. Everything else is done on-site, either at a featured restaurant or winery or wherever.

There’s an energy about the Hispanic Food Network, despite its modest means, an enthusiasm you can see on the faces of Gonzalez and Flores and Finney.

It has cost more money than they’ve expected, to buy cameras and lighting — and for Finney to jerry-rig “a steadycam” made out of a broomstick and a Rollerblade wheel — but it’s made them a more nimble enterprise. Though lacking an office, the Hispanic Food Network has become, in all other ways, a full-fl edged production company. “We really had no choice,” Gonzalez says.

Theirs is an up-by-the-bootstraps story that mimics most of the businesses they’ve profiled. A Cuban restaurant in Spokane Valley called Blue Island, for example. Its owner, Rolado Diaz, Gonzalez says, “is a political refugee who ended up in Spokane, just through circumstance, and started this restaurant.”

Back at DeLeon, Flores has come storming in. A whirlwind of a man, Flores begins telling three stories more or less simultaneously: how he and Mike met, how the show came together, and how, outside of Blue Island the other day, Louie gave Mike a little stage direction.

Flores says he told Gonzalez to add a little more punch to his delivery. “I said,” Flores recalls, bending his knees and thrusting his arms from his hips over his head like a symphony conductor, “Kick. It. Up. Man!” There’s no doubt Gonzalez has kicked it up. On Good Morning Northwest, Gonzalez pendulums between somber newsman and lightly conversational morning show host. Flores shows me video of the Blue Island shoot. Standing outside the restaurant, Gonzalez is a fl urry of enthusiasm. “You guys all know, I’m from Miami, Florida” he says, leaning into the camera, emoting with his hands and body, “so my favorite cuisine is Cuban. Coobah-no, brother!”

At DeLeon’s, it doesn’t take long for Jeff Panagos to locate a Mexican cook — a squat, good-natured man named Feliciano Ramirez. Gonzalez hovers over him, shooting cook and Mexican pizza from dozens of increasingly odd angles, buzzing from one to the next quickly, then pausing in air to get the shot like a solid-state hummingbird.

The differences between Eastern Washington and South Florida are stark, in terms of Latin culture, Gonzalez says. His hometown sports massive populations of Cubanos, Puerto Ricans, Dominicans. Still, he sees a tremendous opportunity for Latin Americans in our area to do something that the cultures down there don’t often do. “The communities in Miami are so big,” Gonzalez says, “they all kind of keep to themselves.” Places like Eastern Washington — the team is reaching out to Hispanic community businesses in the Tri-Cities and looking to expand into Walla Walla and beyond — offer an opportunity, because of the relatively small numbers of each group of people, to create an all-embracing Latin community.

The Blue Island video segment ends — after a lengthy demonstration of Chef Fabrizio’s preparation of El Ropa Vieja and a cameo by Flores in a white Panama hat — with Gonzalez sitting down to try the food: “Thanks for logging on. Check out hispanicfoodnetwork.com." He covers his mouth and offers an apology laced with the enthusiasm he showed at the beginning of the segment. “I’m not supposed to be talking with my mouth full...” he mumbles, a big bite in his mouth. “But it’s so-o-o good.”

En La Cocina airs at various times on various channels, including KXLY 4. Check the schedule and watch videos at hispanicfoodnetwork.com.